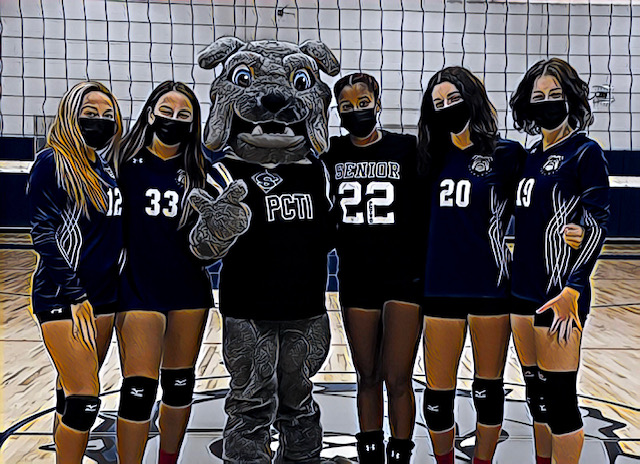 We have amazing news… The Dover Tigers took down the NJP Lock of the Night pick after 218 straight wins. Dover upset Hanover Park in crazy three set match that went down to the final point, with the third set at 26-24. The Tigers have come alive of late winning three of their last five and have started to gel after a really tough start to their season. Their season last Spring was totally cancelled so it’s great to see them get back on track.

Ferris won their Hudson County quarter-final today over North Bergen. The Bulldogs have been having a season to remember and will now face undefeated Hudson Catholic in the semi-final. Ferris is now 16-1. Amanda Zweifler was outstanding today posting 12 kills, 2 blocks, 2 aces, 8 digs and 3 assists in an all-around great performance. Amanda has now slugged 155 kills on the season and has 59 aces which puts her among the state leaders. Hudson Catholic has been a top 20 team all season and it will take a Herculean effort to for Ferris to come away with a win. But the stage is set… Secaucus took a three set thriller from Memorial and Union City got by McNair to set up a Union City vs Secaucus semi-final.

The Shore Conference tournament is down to 8 teams with 6 of the 8 top seeds advancing. TRE eased past Point Pleasant Beach in straight sets powered by Shannon Dunaway’s 5 blocks, 3 aces, and 4 kills. The Raiders are now 16-2 with their only 2 losses coming to Southern. Colts Neck also advanced by taking down the #5 seed Jackson Liberty. NJP was on this one having Colts Neck ranked much higher than the seeding and now the Cougars will take on the Raiders in a quarter-final. Barnegat will face the #2 seed St. John Vianney in another quarter-final. Vianney stopped Wall in straight sets and Barnegat blew past Toms River South aided by 8 kills from Ashley Berger and 21 assists from Patria Moreno. Patria became a member of the 1,000 assist club for her career. See her accolade at https://njpowerranking.com/accolades-nj-girls-high-school/

Jayne Wilkinson caught fire tonight and led Pinelands to a huge three set victory over Toms River North. Jayne notched 11 kills and 4 blocks with some big points down the stretch to solidify the win. Pinelands was rated higher than TRN in the NJP rating system but it will go down as an upset with #11 beating #6. Pinelands has earned the right to play Southern who ripped past RFH in straight sets. Hailey Krause with 9 kills in that one for the Rams.

Both Donovan Catholic and Brick Memorial won today and they will face each other in what is sure to be an epic battle. Donovan has been brilliant all season, is 18-3, and has already beaten the Mustangs in straight sets on 10/9. But Kate Stoughton will be looking to close out her high school career with a Shore tourney Championship as she quickly approaches the 1,000 kill mark for her career. She already has 257 kills for the season and needs, in our estimation, about 5 mores matches this season to reach it. A win here will give her a much better chance.

The Shore Tourney will be decided at Georgian Court University on Monday with both semi-finals and the Championship match on the same evening.

Immaculate Heart wore down Old Tappan today and used 13 kills from Brookelyn Talmadge and 9 from Deanna Whelpley to put the Knights away on straight sets, 25-22, 25-10. Jola Olutiola smashed 9 kills for Old Tappan and supplied 16 digs to lead the team in both categories.

Paramus surprised Northern Highlands today in straight sets. 2 close sets. Great job by Paramus who spread out their attack well with every player contributing. 13 digs from Amalia Cherba and 5 kills and 3 blocks from Mary Clark. The Highlanders have been streaky this season, winning their first 7, then dropping 3 in a row, then winning their next 7 and have now lost three in a row once again. If the pattern continues they may end up as tournament of champions winner as a 7 game streak now would take them to the end. It will be a big test Friday when they face Ridgewood in the Bergen County tourney quarter-final.

Kudos to Kayla DePol who put up the best performance of her career as River Dell blasted Indian Hills. Kayla ripped 7 kills and launched 6 aces in a eye-catching achievement. River Dell still has just two losses coming at the hands of the top 2 teams in the state.

The NJP Predictor is at 37-5 so far for the night but one of those losses a Lock of the Night pick. Dover beat the Predictor on the Lock dropping the Lock picks to a record of 244-2. We are officially retiring the Lock picks for the remainder of the year. Dover now has the claim to fame of putting the NJP Lock of the Night out of business. More at https://njpowerranking.com/2021/10/20/dover-tigers-beat-the-njp-lock-of-the-night/

More great matches tomorrow. We are 31 days from the TOC Championship finale…