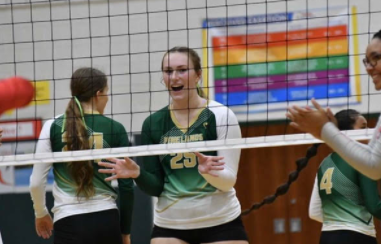 Pineland’s is having a stellar season and several seniors have stepped up to make a huge impact for the Wildcats. But none have contributed more than middle Jayne Wilkinson. Jayne has been a key player and starter in her past 2 seasons, but this season is her breakout, driving the Wildcats to success.

The 6′ senior is having a dominant year and leads the Wildcats in kills and blocks. And the Wildcats have had an extraordinary season. They are currently 14-5 and have some signature wins over Barnegat, Cherokee, Jackson Liberty, Absegami, and they took down undefeated Mainland as well as knocked off Toms River North in the Shore tourney. They now have an opportunity to knock out perennial favorite Southern on the next round which should be a great match-up.

Jayne has been an outstanding leader this season as a senior. She exudes positive energy and has the ability to pick her team up and positively change momentum quickly. The team rallies behind her monster blocks and put away kills on the attack.

Jayne moved over as a full-time volleyball freshman year leaving her basketball and other sports days behind her. Her last two years playing club volleyball East Coast Crush has turned her into a complete player.

Wilkinson is a prime recruitment candidate for college volleyball scouts but for now she is putting her academics first as she aspires to explore environmental science as a career.

Here is our interview with Ms. Wilkinson…

How are you, Jayne? Thanks for joining the NJP player interview club. Tell us a bit about yourself?

Hi! I’m Jayne Wilkinson, I’m a Senior at Pinelands Regional high school and will be graduating with the class of 2022. I live in Tuckerton, New Jersey with both of my parents and one older brother who currently attends college in Connecticut.

I am in my 6th year of official volleyball, and I fell in love with the sport in 7th grade. Leading up to middle school, I tried many different sports including gymnastics, field hockey and softball where I found that height can be a disadvantage. Volleyball was a sport that took one of my biggest insecurities at the time, height, and turned it into a strength. I committed myself to the sport and decided freshman year to end my basketball career and join club volleyball in the offseason.

I am 6’ and a middle hitter/blocker for Pinelands as well as my club team. I played for OCVBC my freshman year and have played with East Coast Crush for the past 2 years. Middle is my favorite position to play but when the opportunity arises, I enjoy playing in the back row. My libero makes fun of me for it since I’m on the taller side, but it’s fun to try out a position I don’t play often.

Tell us about your Pineland teammates. Who else has been this year’s standout players during this season?

My team, or now more so my family, is one of my biggest support systems. Without my sisters by my side, I would not be the player and young adult I am today. The energy we create together is positive, uplifting and an environment that pushes everyone to become the best athlete they can. My setter from the start, Bailey Lawrence, has evolved into not only a strategic and smart player, but also a leader on the court over the past few seasons. Lawrence is a standout player, especially this year, with her killer service runs and the cleanest setter dumps I have ever seen. We have developed a tag team bond in the past 4 years together and we strive to “eat up” every match.

NJP considers you as one of the top players in the state. Do you plan on playing in college if given the opportunity? If so, which ones are you looking at? What do you plan to study in college or what is your career path?

I have considered playing in college but ultimately decided to not continue my volleyball career on the collegiate level. I will continue to play club level in college since I love this sport full heartedly. It was a tough decision to make, but I want to go to college to focus on my future and long-term career. My top colleges include University of South Carolina and University of Central Florida. I plan on studying environmental science with a focus in wildlife management to eventually go onto a career within the science field.

Pinelands has had an amazing year thus and is currently at 13-5. What was your greatest accomplishment this Fall so far?

My greatest accomplishment so far this Fall season was reaching 100 kills on Senior Night. Last season was not our normal intense game schedule, so this was special to be able to reach a goal I’ve had for so long by Senior Night.

You are leading your team in kills and blocks and are getting better and better as the season progresses, as evidenced by your 11-kill performance (best of your career) against Mainland on 10/11 and then again on 10/13 against Absegami. What are your goals for the remainder of this season?

My ultimate goal for the season would be to continue to lead in kills and blocks, as well as earn another title. I have a state title under my belt from last season, and I would love to assist in another for the team. I am also hoping to top my career high of 11 kills in one match and rack up more blocks for the season. Setting goals is a crucial part of my mental game, it gives me something to work and compete for every match.

Tell us about your team’s head coach Kathy Bennett?

Coach Kathy Bennett has been my coach for 6 years now, including 2 years of basketball and 4 years of high school volleyball. Mrs. Bennett is someone I have respected and looked up to from day one, as she has been my biggest supporter on and off the court. Coach not only teaches us how to play a position-based game, but also the sides of volleyball not many see. This includes building up our mental strength and confidence to perform our best under any circumstance. Coach Bennett is dedicated to improving every player that crosses her roster. This not only makes better players, but a better team.

Which individual player is the toughest competitor you have played against this year or in your career?

In my career, I have been fortunate to play against some of the best players in the state but to single it one in particular is difficult. This season we were able to battle Williamstown, even though we lost, I learned a lot from that match. We almost beat the #3 team in the state, which was a huge confidence booster for not only myself, but my team. I think being able to hang with a team of that caliber will set the tone for the next couple weeks for us.

Under pressure, the mental tool I use the most is focusing on the next point. When a mistake is made it’s easy to dwell on it, which affects your attitude and your team. Instead of dwelling on a mistake, I take that energy and put it towards scoring the next point. If I mishit, I take my energy from being negative and put it into crushing the next ball.

Yes, I absolutely think attitude is one of the single most important factors in winning. If you enter any competition with a negative attitude, the energy you put in will be the result you receive. A positive attitude, even during difficult situations, can produce outcomes that may not be expected.

Is there any advice you were given from previous players that has stuck with you throughout your career?

As a freshman, I was lucky enough to practice and receive advice from some of the best hitters in the state, including Kayla Thornton. Kayla advised me to not let your emotions take over, leave it all on the court, and that at the end of the day it is just a game. This advice has helped me learn to be level-headed and not let the game beat me.