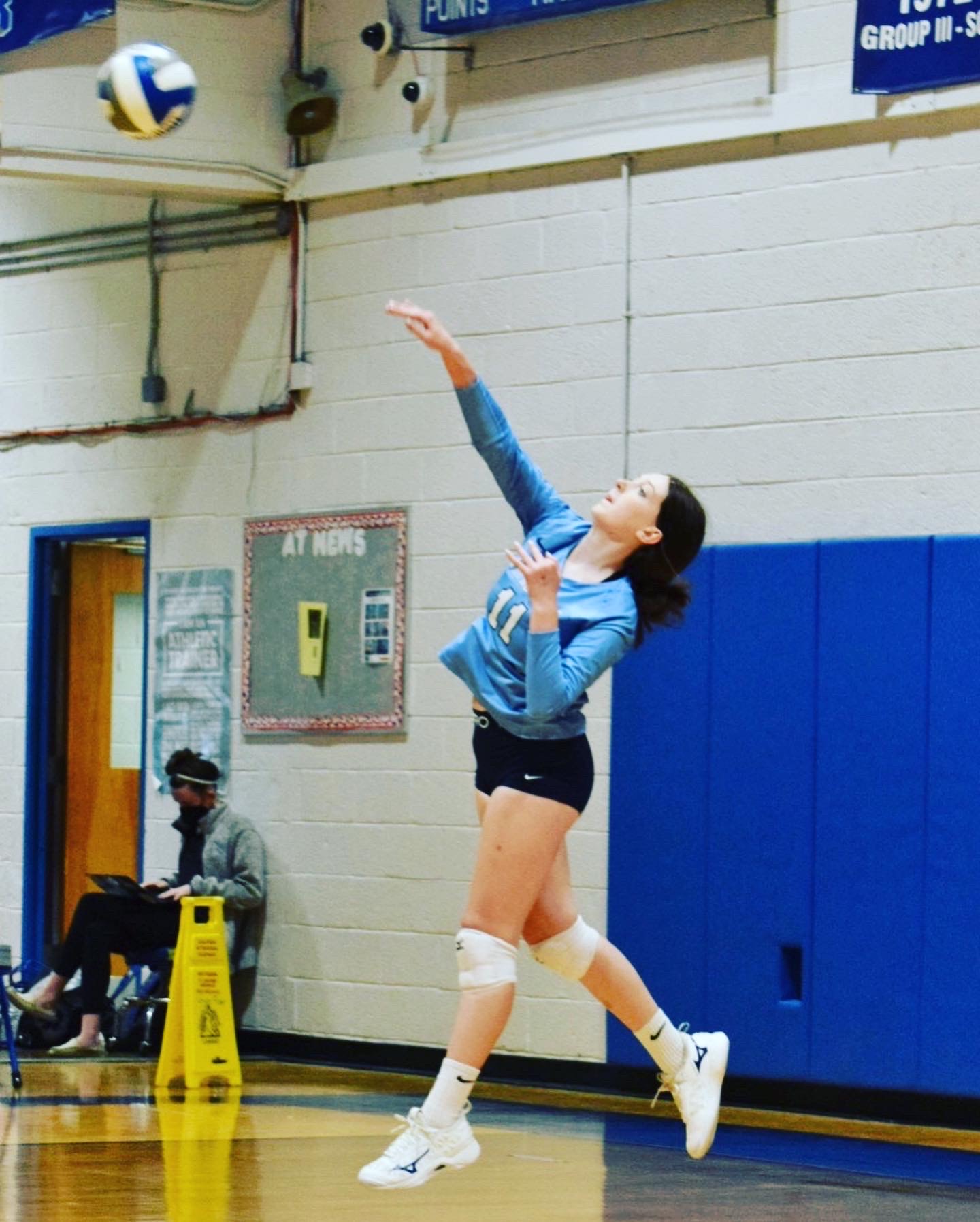 What an amazing start for Notre Dame freshman Cassady Smith. In her first year for the Irish, she has consistently been near the top in her class year 2025 and brings a youth movement to ND that will have long lasting effects for the program.

Cassady has been a solid all-around player for Notre Dame. She has slotted in at outside and has been a major contributor on both the offense attack and the back line defense. For Head Coach Anthony Carpenter, we don’t think he could have scripted it much better with 5 underclassman on varsity and two freshman impact players.

Maia Cinca and Cassady have infused the team with a high talent level from the bottom up. Cinca has controlled the middle using her height and reach to deliver power kills and formidable block. Cassady has controlled hits from the pins and provided high caliber digs and passing that has kept the Irish in most of their games, even against some of Burlington County’s best squads.

ND has a chance to have their first winning season in the history of their program. And the future looks bright for them as they made the non-public state playoff grid and will face St. John Vianney in the first round. While they slip on their Cinderella sneakers and get ready to spin some magic…

Here is our interview with Ms. Smith…

How are you, Cassady?

Thanks for joining the NJP player interview club. Tell us a bit about yourself?

Hi, I am Cassady Smith and I attend Notre Dame High School and I live in Lambertville, with my mom, dad, and two dogs. I’m a freshman this year and I graduate in 2025.

I’ve been playing since I was around 9 years old, taking after my parents who met playing volleyball. I first started doing clinics at a young age, which ultimately led me to playing on my first club team at age 10.

I am 5’7 and I play outside and have played setter for my club team at CJVA. My favorite position to play is definitely outside but after that it would have to be setter.

Tell us about your Irish teammates. Who else has been this year’s standout players during this season?

I would have to say Christina Lenzo, our setter, Maia Cinca, Alyssa Jennings, and Elizabeth Sullivan who always brings us energy on and off the court.

NJP considers you as one of the top players in the state, especially for your class year. Do you plan on playing in college if given the opportunity If so, which ones are you looking at? What do you plan to study in college or what is your career path?

I think if I was given the opportunity I would love to play in college but I don’t really have much of an idea of where. I don’t really know what I would study and hope I take interest in something during my next 4 years at ND.

Tell us about the BCSL landscape and where you think Notre Dame fits in, compared to the other teams in the league?

I think that most of the teams are on the same level based on gameplay and it really depends on who brings the energy and how they play that day.

How has your transition gone, coming on to the team as a freshman, and getting major playing time due to your skill level?

The team has been really welcoming to me and the other freshmen and everyone is always supporting each other. I thought it would be scary coming onto the varsity team as a freshman but all of the girls really helped us settle in.

Having two high quality freshmen like yourself and Maia Cinca, will carry Notre Dame’s success for the next few years? Tell us about your relationship with your fellow freshman star.

Maia and I have been playing club together for the past 2 years and over that time period we got close, but I think playing and going to school together has really strengthened our bond.

Tell us about your experience at CJVA?

I started doing clinics at CJVA when I was 9 or 10 and made my first club team at age 10, now I’m entering my 5th season at the club. CJVA has really helped me grow as a player and I thank the club for helping me make lasting friendships and developing a love for the game.

Even in the short time of knowing my high school coaches, Coach Carpenter and Coach Jenna have really helped me in everything from my arm swing to my mentality on and off the court. Throughout the season they have helped me so much and I’m very grateful for everything.

During the school season our home gym is definitely my favorite place to play. I love the atmosphere and energy that a home game brings.