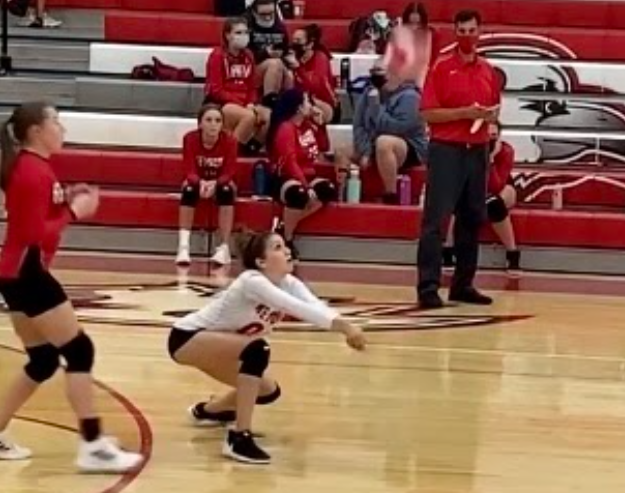 Having two older brothers, and being the youngest of three, is often a challenge and a gift at the same time. For Keyport freshman Talia Snedeker, she has been pushed both academically and athletically to compete. And that has brought some mighty benefits. You see both of Talia’s siblings are accomplished students. Her brother Cole is a junior at Yale, and her other brother Reed, is a freshman at University of Notre Dame. The pressure to keep up is a pretty big load to carry for the freshman, but we think she is going to be just fine.

Talia is like many new high school players in their first year. She walked into summer workouts for the volleyball team at Keyport not knowing really what to expect. She started playing club at Warren Sixpack at a young age and had a few years of experience under her belt. She loves playing libero and was hoping to find a spot on the varsity team. That was a little over three months ago.

Flash forward to today, and Keyport just finished up their Fall season. Talia not only got a roster spot on the varsity squad, but she became a starter. And in her first year, she broke the school record for digs in a season. Well, let’s say she not only broke it, she “shattered it”. She reached the record in half the amount of time as the record setter. But she also contributed in a number of other ways for a Keyport team that was putting together one of the best seasons in their history.

Talia’s 157 digs in just 15 matches was super impressive for the freshman. She also tallied 30 kills and 27 aces. Her team is comprised of mostly sophomores and a few upperclassman so the next two years look to be solid ones for the Red Raider’s.

Talia has equally as high aspiration for her collegiate choices. And she will most likely have an added wrinkle of finding an academically strong school with an outstanding volleyball program. Much to her delight.

Here is our interview with Ms. Snedeker…

How are you, Talia? Thanks for joining the NJP player interview club. Tell us a bit about yourself?

Hi Gary! My name is Talia Snedeker. I am a freshman at Biotechnology High School in the class of 2025. I live in Atlantic Highlands with my family and my two Goldendoodles. I have two older brothers, one is a junior at Yale University and the other is a freshman at the University of Notre Dame.

How long have you played volleyball and what inspired you to take up volleyball initially? What are your metrics/details? Height, vertical, position, club team, etc. What is your favorite position to play?

I have been playing volleyball for four years now, since I was 11 years old. My cousin was recruited to Division 1 and she introduced me to the game and inspired me to be the best volleyball player I can be. I have been playing for Warren Sixpack under the great Fred Siegle from day one. I played libero for my high school season at Keyport. Last club season at Sixpack I played outside hitter and I really enjoyed it. Libero is definitely my favorite position and this high school season I excelled at defense.

Tell us about your Keyport teammates. Who else has been this years standout players during this season?

My team formed a great bond over the past couple of months and we ended the season on a great note. Allison Ahmed has been a great standout player this season and we have some great JV players who will step up to the net. We have a young team and will keep working hard to improve our game.

NJP considers you as one of the top players in the state, especially for your class year. Do you plan on playing in college if given the opportunity? If so, which ones are you looking at? What do you plan to study in college or what is your career path?

My goal is to play in college. I have several schools on my radar and am currently compiling a list. I am partial to schools that have high academic standards and top notch volleyball programs. As a freshman, I am weighing different options that align with my passions. Stay tuned!

Keyport’s year has been filled with win streaks and losing streaks. Which team that you faced was the toughest?

Middletown South was the most challenging three sets we faced this season. It was intense as we battled point for point in each set. It was a great game even though in the end we lost by two points in set three.

You have been a defensive gem in your initial campaign and have broken the Keyport single season record for digs in half the games of the previous record holder. What are your goals for the rest of your high school career?

Being at the top of my game is very important to me. I am a very dedicated and competitive person and I know if I keep training hard, I will be able to reach my goals. For the remainder of my high school career, I would like to continue to push my limits on the defensive end as a libero, leading my team to victory.

Tell us about your experiences playing beach volleyball?

I played for a beach volleyball team for one summer a few years ago but I still play in tournaments. It is a lot of fun but indoor volleyball is my passion so I have focused on that ever since. I owe it all to Fred Siegle and the great coaches of Warren Sixpack. I like the team unity and team spirit that goes with the game. It’s so exciting to train together as a team, then to use everything we’ve worked hard for to win in the end.

Tell us about your team’s head coach Phil Recco?

Phil Recco is a great coach and is very supportive. He knows how to pull the team together and get the best out of every player.

Fred Siegle of Sixpack has been a great mentor ever since I started playing when I was 11 years old. My club team coaches, Brett Killman and Brian Soldano, are the best coaches around. They are passionate about the game and their players and have inspired me to work hard to be the best I can be. I am looking forward to a killer club season this year.

Staying positive and learning from your mistakes is a path to victory.

What one word describes you best?

How does athletics make you a better person?

Athletics motivates and inspires me to work hard in every aspect of my life.