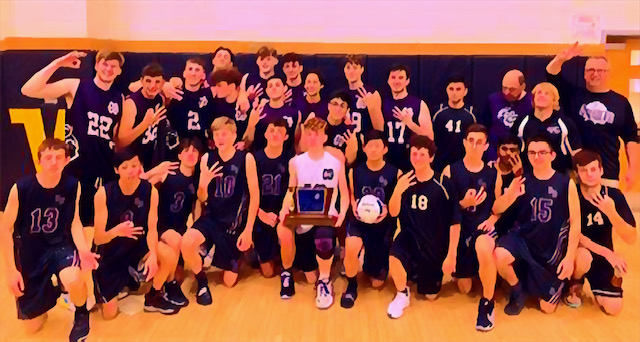 The new boys high school volleyball season is up and running and its time for some opening weekend observations. Like every season, we will see many of last years standouts move on to their college careers and many returning players rise up into leadership roles. We will also see the emergence of new players taking the stage and gaining some spotlight moments, which is always our favorite part. Let’s take a look at some of the opening weekend highlights:

The returning 3-peat champs, The Old Bridge Knights, will again have an elite squad this season under brilliant head coach Andrew Hopman. The Knights got off to a great start with 4 wins up on the board already. And just to clarify, these were not games against smaller or weaker schools. They took down Hillsborough, Fair Lawn, East Brunswick, and Kingsway. All of which are perennial Top 20 teams. Old Bridge certainly lost some graduating firepower but have key pieces returning like junior outside Blake Krapf and senior right side Pavlo Chernyshov in addition to one of the best libero’s in NJ, senior Rob Obdyke, who was not even on the floor this weekend. David Flores will quarterback at setter this season. OB is a clear #1 in the NJP rating system already.

Hillsborough will be a beast this season in the Skyland Conference. Their one-two punch of Jack Freese and Vinal Shah will be two names you will be hearing all season long. Jack is a 6′ 9″ middle force on both the attack and on the block. And Vinal may be the best outside in NJ with an exceptional vertical and outstanding athleticism. Losing senior setter Pat Kelly hurts and we will see if junior Jim Barrone can fill his big shoes. As Barrone gets more reps, expect the Raiders to get better and better as the season progresses.

OK wait one second. One of Williamstown’s brightest stars, Drew McNellis, was ready for his senior year and we thought he gave the Braves a decent chance of having a highly competitive team in the South region. But our first roster analysis has him as the middle for the Southern Regional Rams. McNellis has already committed to play D1 volleyball for Long Island University and he will bring size, energy, and talent to a Rams team that is ALWAYS competing for a state championship. This will be one of the most significant transfers this season. Joining McNellis with junior Lucas Kean will be very tough for Rams opponents to contend with.

Loving the team that is coming together in Livingston. Chris Lynum in his senior year will certainly be a force to be reckoned with and he joins with rising seniors Kellan Sun and Eric King as well as emerging juniors Neil Ohlawat and Olisa Ojukwu. This should be a very strong team in 2022.

We expect Scotch Plains Fanwood to also have a very strong team this season powered by junior setter Nick Schmidt and sophomore outside Tim Ennis. They also have solid returning varsity players in Amir Johnson, Jeremy Zimmerman, Aidan Heifetz, Reese Condon and Brodie Robertson. Also, junior Zach Chung will surprise a lot of people and anchor the defense as libero.

St. Joe’s Metuchen started the season off by winning the Bloomfield tournament. This tourney is always extremely competitive and has a huge field of top teams due to the Bengals multi-gym facility. The Falcon’s Scotty Schmitt is a player to watch this season. The 6’11” junior has a year at Warren Six Pack under his belt and will continue to improve with more reps. He will be a force in the middle for St. Joe’s who already have an outstanding middle with senior John Toolan at the shared position. Senior Aidan Thompson is an excellent libero and watch for senior outsides Mike Weikum and Jacob Franco to have breakout seasons.

Last years final four teams, Fair Lawn and St. Peter’s Prep, should both have solid returning teams. The Cutters figure a way to always be near the top and will use senior outside Itay Akad to drive the attack. Prep loses their two standout players to graduation in setter Tim Jimenez and outside Aidan Apito, both NJP first team all-state players in 2021, but have Joe Parise and Andrew Fernandez returning from last years starters and two solid middles in Connor O’Flanagan and Nick Marusic. If a strong setter emerges, this will be a team to watch. Fair Lawn lost to OB this weekend but edged Kingsway to start 1-1. Prep starts their season Monday with Harrison.

CBA will be going through a major transition with Head Coach Monica Slattery retiring from her long time position as the teams leader. Former Jackson Memorial Head Coach Jason Ulrich will assume the new role as Coach of the Colts. CBA has several returning varsity players from the magnificent 7 last season including Andrew Kwapniewski, Andrew Sasso, and Liam Crosby.

O’Shamair Majette of Paterson Eastside kicked off his senior year with a 10 kills performance and a win over Passaic. Junior Dacquire Simmons will be assuming the setter role for the Ghosts. If these two players mesh, Eastside can compete.

NJP will publishing its first ranking of the season once we get enough games in the database to be statistically significant. We expect that to be by Easter.

Good luck to all the boys, coaches, teams, etc… 🙂