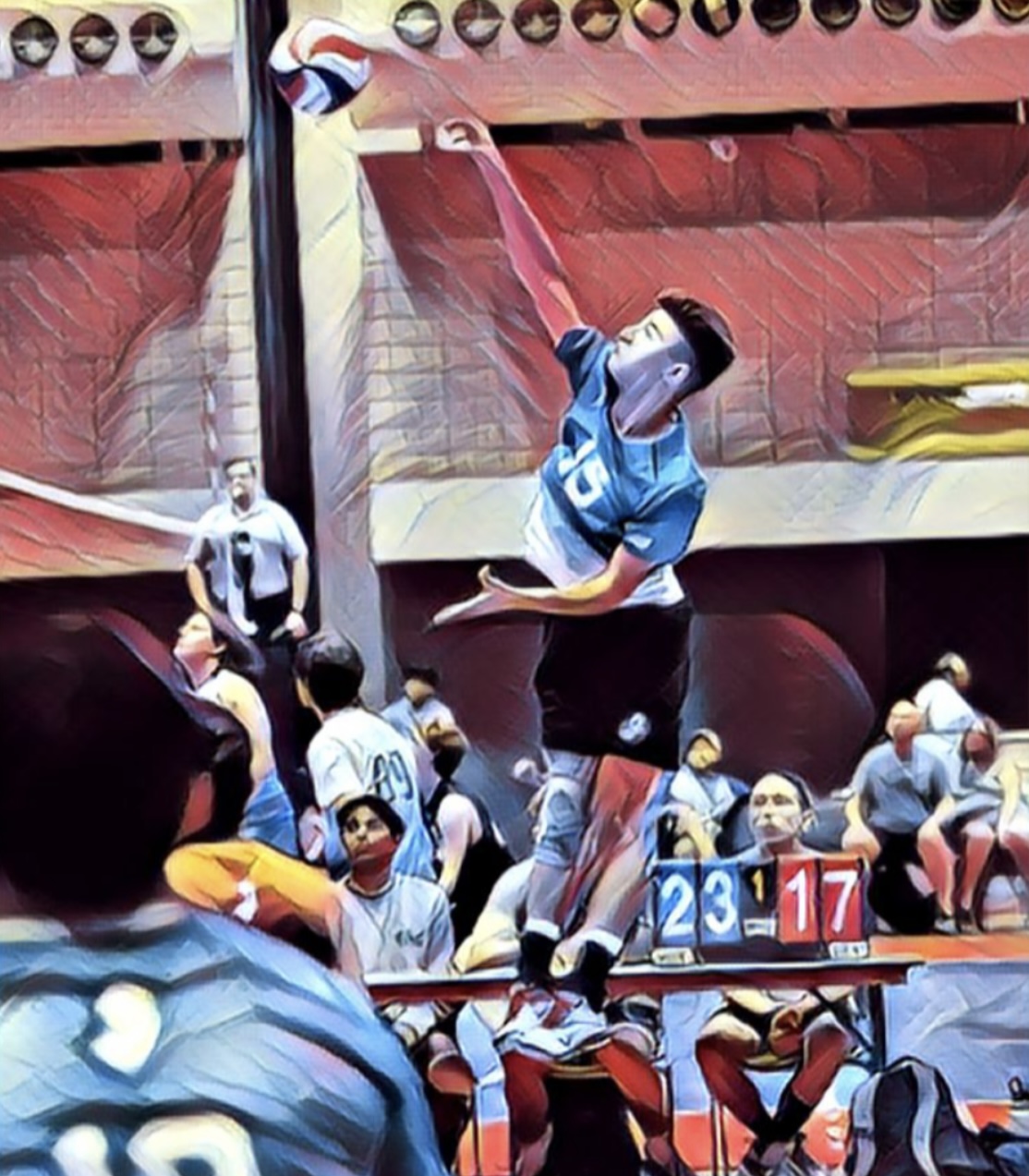 Greetings NJ high school volleyball fans. The boys high school season continues to progress into week three and Tuesday night’s scoreboard gave us many more indications of the power teams that will emerge come state playoff time. Tonight, we will explore some of the big time games that occurred, the players that are jumping off the stat sheets thus far this season, and even end with the NJP computer algorithm’s ranking as of tonight’s games.

This past weekend, the Livingston boys high school tournament occurred at Livingston high school. Remember, all tournament games like these are not part of the wins and losses in the standings, but often give us many insights about the teams that rise to the top of these challenges. The defending champion Old Bridge Knights took the tournament crown over the host, the Livingston Lancers. Semi-finalists were Hillsborough and St. Joe’s Metuchen. Old Bridge was installed as our early season favorites to make it 4 championships in a row, but todays scores may lead us down a different road.

It is also noted that the flu bug have been ripping through team locker rooms this past week. The great news is that most teams have not been in COVID situations. But the bad news is that shielding from the pandemic virus and now playing without masks is bringing a wide variety of challenges to unsuspecting immune systems. But please, let’s count our blessings for some players temporary disruptions to their season. So, some of the games played may be influenced by missing players.

Livingston, Old Bridge, St. Joe’s and Southern met up for a quad today and one team emerged a clear winner. The Southern Rams were perfect today. They took every set from three of the top teams in the state. They remain undefeated at 7-0. I think one of the big surprises is how easily they accomplished the task at hand. St. Joe’s could not tally more than 14 points in both sets. Old Bridge got to 20 in one set. Livingston was limited to 16 and 9. This was a dominant performance by the Rams. And Lucas Lean was just outstanding on this Tuesday. He posted 36 kills over the three matches and also had 2 blocks and 12 digs. The 6’3″ junior is maturing into an elite NJ volleyball prospect.

The St. Joe’s vs Old Bridge match-up was probably the best of the day. The Knights took the first set, but the Falcons battled back to take the last two sets and handed Old Bridge a second loss on the day and their second of the season. To give perspective, Old Bridge lost two games the entirety of the 2021 season finishing at 23-2.

Livingston came out on the short end of the stick, finishing 0-3 for the day. OB lost the two games and finished 1-2. St. Joe’s finished at 2-1 with their only lose coming to Southern.

Bridgewater Raritan chalked up a nice win against East Brunswick today. The Bears are struggling this season at 1-5 and have a rough schedule ahead next week facing Old Bridge and St. Joe’s. They may be a notch below last years team that finished 16-8.

The Skyland is a stacked division once again with 4 top teams competing for the league crown. Hunterdon Central took their first loss of the season against division rival Ridge today. Hillsborough is another Skyland power that has got off to a good start. It would not surprise us to see all 4 of the teams in the NJP top 10 at the end of the season.

A few teams have had amazing starts so far this session in 2022. We will note a few of them as NJP has tallied over 20 teams that are still undefeated. We will watch this number dwindle down through the end of the first month to just a handful. But seeing which teams will be left at the end of the month is always a treat.

Southern and SPF are two of the top teams in NJ and currently receive the one and two rankings below. They are 7-0 and 8-0 respectively. We don’t expect either team to lose many games this season. CBA is 4-0 and have responded well to new leadership. Williamstown, Teaneck, and Bergenfield are also in this group.

Some new teams in the undefeated mix for 2022 include Passaic Tech at 5-0, Jackson Liberty at 4-0, Lakeland at 4-0, and Vernon at 4-0. Early indication from the algorithm is that these teams are solid and racking up rating points. Also new on the undefeated front is second year program Middletown South, Manchester Township, West Essex, Sterling, and Clearview. We will see which teams hold up through the end of the month.

Some of the lower ranked teams that remain undefeated in the ranks are McNair, Garfield, and Orange. Would love to see these teams continue to rise up through the year, especially as they face some tougher competition. The standout performer, and the story of the year thus far, is Passaic Charter who is a perfect 8-0 and tied for the best record in the state. As mentioned in previous blog posts, they have surpassed the total wins in the history of their program before the season started. Hats off to Coach Jordan Sarro as they gathered another win tonight against Paterson Kennedy. Anthony Matute is a player to watch as the season progresses. He had 8 kills and 14 assists in tonight’s win.

OK, we won’t wait any longer….

Here is the current team ranking from the NJP algorithm:


Please remember, our rankings are based on math! It is a pure statistical rating and ranking based on our proprietary algorithm. The formula has been picking winning teams in any individual match-ups at a win percentage of near 90%. it is unbiased and removes any emotional criteria from the process. We usually wait a bit longer to post our first ranking, but it’s all just for fun and hopefully spurs some passionate discussions around the state.

And now we present our player data file. Noting that some teams have not entered all data as of our midnight update but it will catch-up in the next update. A few legend items for you when looking at the file. Top 50 players in each category have the stat highlighted in blue. The top 5 in each category are bolded. They are arranged by team alphabetical for easy viewing. Just scroll to your team and you will see the stats for each player.


Enjoy this time of year. The season goes so fast! Before you know it, we will be preparing for state playoffs. So, have fun with the “ride”. It’s the best part!

On the college front, two NJ teams will be heading to the NCAA D3 Championship tournament this year. Congratulations to both Stevens Institute of Technology and Rutgers Newark. Stevens finished 4th in the national rankings an earned the right to host this weekends preliminary tournament (round of 16 and round of 8). Rutgers Newark also earned this distinction with a #3 ranking in the nation. Big difference between these two teams as far as NJ players go. Rutgers is absolutely loaded with New Jersey born talent. This includes a number of former Old Bridge players such as NJ player of the year in 2018, Elan Dorkhman, and 2019 POY Andrew Zaleck, as well as All-American setter Justin Touhy. The team is 75% former NJ high school players. Stevens does not have a Jersey born player on their roster. But this is an opportunity for high school players to see some top notch local D3 championship games at both sites this Friday and Saturday.

There are also some NJ players on other teams in the final 16. Congratulations to Wentworth’s Hunter Oshman (Hopewell Valley), Josh Milke (Rancocas Valley) and Connor Adams (Mount Olive) for making the final 16. They will be playing at Rutgers this weekend. SUNY New Paltz will visit the Stevens site this weekend and has outside hitter Chris Larkin, a graduate of St. Peter’s Prep. Baruch made the final 16 and features Jack Centano formerly of the Fair Lawn Cutters. Marymount University was a surprise at-large selection for the final 16 and has Chris Manganiello from CBA and Caden Kelty from Rancocas Valley on their roster.

Rutgers is the deepest of the finalists with NJ talent. In addition to Zaleck, Dorkhman, and Tuohy, the roster also has seniors Arvind Kumar from Southern, Antonio Rocchio from Old Bridge, Robert Long from Ridge, juniors Eric Hollenbach from Piscataway, Matt Nikishin from Howell, and Martin Chromulak from Garfield. Underclassman include freshman Aidan Apito of St. Peter’s Prep., Josh Ledesma from Passaic, and Ray Rizwan from Colonia.

If you can’t make the games, tune in for the live feeds. Schedules posted here:

The top 4 teams will meet at Carthage College in Kenosha, Wisconsin on the 22nd and 23rd. Here is a link to the NCAA selection show… https://www.ncaa.com/video/volleyball-men/2022-04-11/diii-mens-volleyball-2022-selection-show

Good luck to all of the NJ players and coaches.