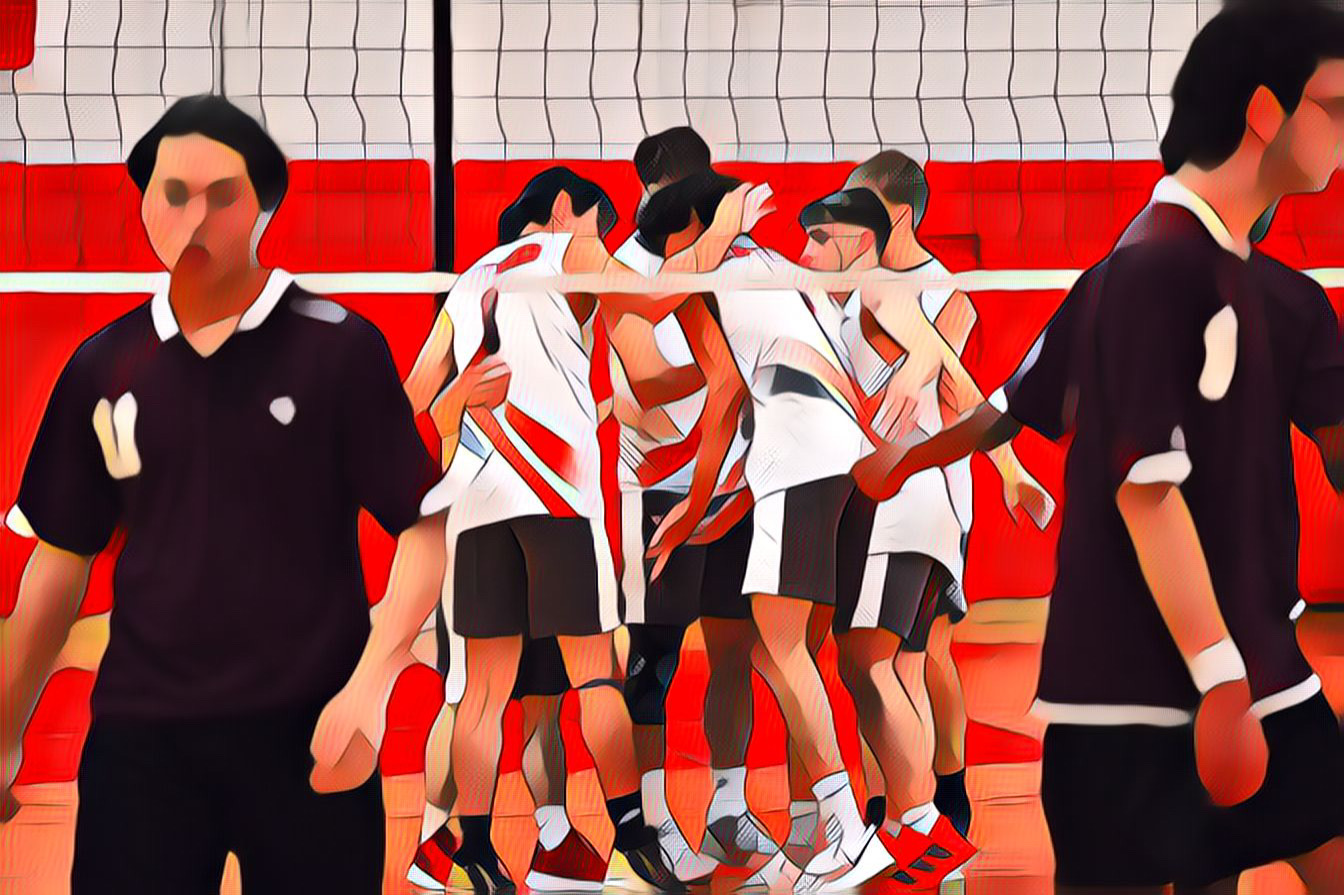 We are down to the last 8 teams in the NJ high school boys volleyball grid and everything is progressing as planned with no major upsets. The top 4 teams in the NJP rankings stay alive heading into Friday’s Sectional final match-ups. Two of the top 4 will face each other in the Central Final. The NJP Predictor finished the sectional semi-final round with an 8-0 record calling both Union and Old Bridge wins in three sets.

It would be uncommon to not have any major upsets throughout the tournament but there is still time left. However, the Predictor is going with Southern, SPF, Fair Lawn, and St. Joe’s in what could be the match of the day against Old Bridge who is seeking their fourth consecutive state title. These two teams have had great seasons and are clearly 2 of the best teams in NJ. If the game was being played in Old Bridge, they may have received the nod, but the home court at St. Joe’s keeps them ahead by a razor thin margin.

Here are NJP’s current odds of winning the state championship based on our rating formula:

The Rams are the clear favorites to win their next three games and win a state championship that has alluded them since 2017. This year’s accomplishments have mimicked their 2017 season which saw the Rams go 39-1 and losing just 6 sets all season. This years team has lost just 2 sets over the 64 they have played and they have a chance to go undefeated at 34-0 if they finish the next three games with victory’s. Lucas Kean, the junior outside hitter, is following in his older brother Justin’s footsteps, and leads the team in kills with 300 and aces with 36. The middle is so solid with both senior Gavin Bates and senior Drew McNellis holding strong numbers on the attack and also defensively on the block. Sophomore Angelo Addiego has made this team into a super power by stepping up in just his second season and providing amazing all around play while posting over 600 assists. Finn Olcott, Nick Piserchia, and Landon Davis have been defensive gems for the Rams. Seniors Matt Rekuc, Matt Leonard, and Nick DiMaria have also been solid contributors in their final year as well. The only two sets lost this season were to #2 SPF and #3 St. Joe’s. For a program that has been at the top of the pinnacle the past two decades, they would like nothing more than to unseat Old Bridge after the past three years of falling short to the Knights.

SPF has a ton of talent and along with St. Joe’s and Old Bridge, have the best chance of bringing down Southern. Their earlier season match-up was a real gem as the two undefeated teams at the time battled for the #1 ranking. The first set marked the tone as the closely contested session ended with Southern surviving a 25-23 onslaught. SPF controlled the temp in set 2 prevailing 25-21 and clearly showed they can compete against the Rams who has been totally dominant their first 18 games. Southern responded after losing their first set of the season and rebounded with a convincing 25-19 win. Lucas Kean led all players with 16 kills in the match. But SPF junior setter Nick Schmidt had a standout game quarterbacking the Raiders and posting 37 assists, 16 digs, and even added 2 kills, a block and an ace. The left side/right side combo of Tim Ennis and Jeremy Zimmerman logged 13 and 12 kills respectively. And SPF out-blocked Southern 8-6 and out-aced them 7-2. Southern experience will be a major advantage if these two teams end up facing off. But SPF must get through their conference rival Union first. The Farmers are flying right now and are coming off a big win over 23-4 Kearny. SPF has not lost to Union since 2018 and have won 11 in a row. The Raiders can not afford to look past this opponent and take Union lightly.

The Old Bridge Knights are looking for their 4th consecutive state championship. They will not go down lightly. Granted, this season has been uncharacteristically non-dominant for the Knights with 7 losses, but they are still in the final 8 and ranked in the final 4. And they have been a force in the state despite the non-return of one of their best players from last season. Rob Obdyke has been one of the best defensive players in NJ since emerging his junior year. This season, he has posted 341 digs and will surpass 600 for his career on Friday. Blake Krapf has been a dominant outside, bringing size and talent as a junior. 277 kills along with 170 digs, 35 blocks and 50 aces is outstanding output. Opposite Pavlo Chernyshov has provided a massive dual attack on the right side and has registered 176 kills and 23 blocks. Jacob Lupinksi has stepped up at the other outside position this season. The sophomore has slammed 125 kills and 14 aces. Senior Jeremy Smith and Sophomore Massimo Rocco have anchored the middle for the Knights. The two have combined for 174 kills and 57 blocks. But the Knights have proven over these past years that defense wins championships and Old Bridge has well over 1,000 digs for the season. This team is well coached, disciplined, passionate, and driven for a 4th straight title.

St. Joe’s also has massive talent and has been in the top 5 all season long. The Falcons have 6’10” phenom Scott Schmitt at the middle and host of offensive weapons to complete the junior giant. Scott has produced big numbers, tallying 222 kills and 109 blocks, the latter the highest in the state. Joe’s has a dynamic set of outsides in their senior year with both Mike Weikum and Jacob Franco. Both players have over 200 kills and 200 digs. Combining these talented players with the right side threat of Akshat Neerati who slammed 193 kills so far this season, makes for a super dynamic offensive attack. Senior Aidan Thompson leads NJ with 498 digs on a team that has posted well over 1,400 digs this season. Like Southern, a sophomore took over the helm at setter this season. Nick Drake has really brought this whole team together and is fine tuned for the playoffs. The game against Old Bridge on Friday will be a great one. The Central is so tough and these teams have been battling tough opponents all season long.

Fair Lawn and Livingston are very evenly matched and are just tenths of rating point away from each other. From our view, Fair Lawn is a solid favorite despite the closeness in ratings. The Cutters have a world of experience in state playoff contests. Livingston has certainly had some talented teams over the past few years but have not been able to keep a streak going late in the season. We don’t think this season will be any different despite many talented players such as Chris Lynum and Kellan Sun. The Cutters come at you with the ultimate team approach, solid defense, and multiple weapons on the attack that will make beating them in the sectional final a very tough ask. Yes, Fair Lawn has 10 losses. But all against top caliber teams. They are battle tested and will be a tough out for any of the final teams. Senior MoMo Caravaglia has stepped into the setter role and produced almost 700 assists on the season. Itay Akad has lead the attack for the Cutters with just under 300 kills and over 200 digs. Junior’s Matt Duran and Vincent Lopez have been strong on the attack providing 300 kills between them. Vincent is near the top in the state with 88 blocks. Cobey Sedaka and Ethan Steen have posted over 600 digs between them at lib and DS. Ian Vann has also contributed a huge 50 blocks at middle. FL is well coached, strongly disciplined, and prepared for whatever opponents bring to the table. Livingston is always the cream of the crop from Essex County and the SEC. They have packed their schedule with formidable opponents this season. They got outlasted by Fair Lawn earlier in the season after taking the first set from the Cutters, it was all downhill after that. The Lancers have one of the lowest dig totals of all the state tournament participants. We think this will haunt them against Fair Lawn.

Union and Eastern round out the field of 8. They both have had outstanding seasons and have earned well deserved spots in the Great 8. For Union, they certainly know their opponent this Friday. They faced them three times this season and were not able to secure a set. They did however push SPF to extra time in one set. Union is probably much better than their rating as they played a late season match against 9-12 Dover without most of their starters and picked up a loss. They will need Herculean performances from Alex Boulin, Faraz Bhatti, Jayden Reilly, and Nate Thompson to keep this one close. Eastern has been driven by senior Pawandeep Singh who posted a team leading 197 kills, 77 blocks, and 18 aces. Eastern dropped a recent match to Williamstown, who Southern held to single digits in their first set Wednesday. This is a massive ask for Eastern to stay close with the Rams. But anything can happen on any given day. We will see if this will be a leap year for the Vikings.

Here are the grids by section…