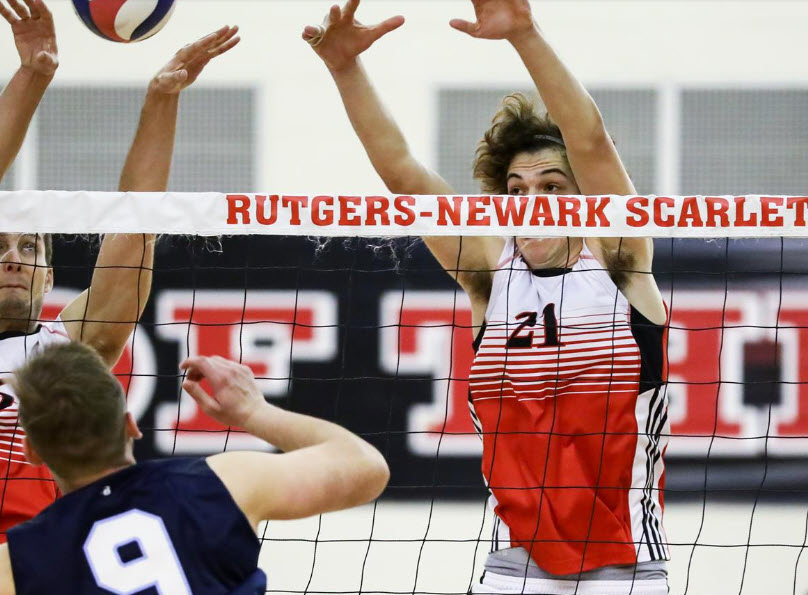 Rutgers-Newark finished the 2021 season ranked #5 in the country. Former George Mason standout player and Head Coach Jack Wilson had helped mold the Scarlet Raiders to one of the best teams in the nation, just missing a trip to the NCAA final 4 in Wisconsin. With Wilson getting married and moving back home to Virginia, RUN has pegged assistant coach Aidan Albrecht to take the reigns.

The 6’9″ Albrecht has risen through the ranks since his outstanding high school career for the Old Bridge Knights. According to the Rutgers-Newark website… In 2012, Albrecht was a member of the USA Youth National Team where he received a bronze medal at the NORCECA Continental Championship. The following year, he was named 2013 New Jersey Player of the Year after a successful season at Old Bridge High School. In that 2013 season, he was named to the AVCA high school Fab 50 as well as 2nd Team AVCA All-American, which, at the time, was the only high school player from NJ to receive that honor. He then took his talents to Penn State University where he was a team captain in 2017 and 2018. He was a 2017 EIVA All-Conference, 2016 Academic All Big10, an EIVA Champion in 2014, 2015, and 2017.

Albrecht has coached at Warren Six Pack and has slotted in nicely as an assistant at RUN until now. He appears to be a perfect match for a Raiders squad that will again compete for a National title. The senior season for standout players such as opposite Andrew Zaleck, setter Justin Tuohy, middles Danny Quay, Eric Hollenbach, and Martin Chromulak, and libero Matt Nikishin should create some fireworks in Newark.

RUN has some young and upcoming talent and Albrecht will, no doubt, have a cast of NJ players clamoring to play in the Brick City in the future. Rising junior Derek Au and rising sophomores Aidan Apito and Josh Ledesma, will be joined by 5 new recruits, all from NJ high schools including Alex Boulin (Union), Pavlo Chernyshov (Old Bridge), Sean Spring (East Brunswick), and Yann Gomez & Jon Espinal from Payne Tech.

Just a few miles away in Union, Kean University has pegged former Wayne Valley high school star Bez Arslani as their new head coach. Arslani went on to play D3 for both NJCU and Kean, becoming an All-American. According to the Kean website, Arslani was the program’s inaugural First-Team All-American in 2015. He was a Second-Team All-American in 2014. He was named the Skyline Conference Player of the Year, First-Team All-ECAC and First-Team All-Skyline in both seasons as well. He was also the first Cougar ever named a CoSIDA Academic All-American, a distinction he achieved in 2015. Bez has played Pro Volleyball in the VBA as well as coaching at SideOut Sports in Fairfield.

Kean has a history of being a top team in the CVC and will look to return to their former form under Arslani’s leadership.

Arslani brings a high level of intensity and expertise. His passion for the sport is as high as it comes. He is a strong believer in treating every point as if its the last one you will every play. He is always looking out for his players and cares enough to give frequent candid feedback. He runs an annual volleyball fundraiser tournament for breast cancer in honor of his Mom who passed five years ago. He will get the most out of his talent at Kean.

The CVC is one of the most competitive conferences for men’s volleyball. We look forward to watching these two teams match-up this winter for the 2023 season as they both look to get the chance to make the NCAA final 4 in Stevenson, Maryland.