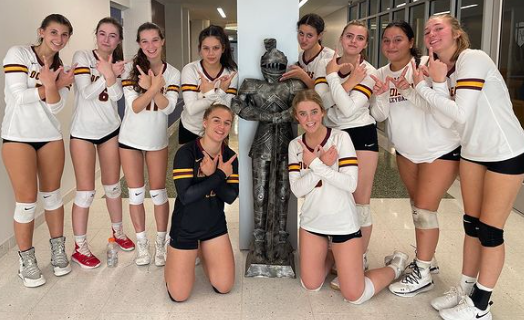 Trying to catch up on the last few days…

We debut the NJP Predictor tonight. We have just under 60 games that we use our rating system and algorithm to try to pick the winning team and score. Check it out at https://njpowerranking.com/2022/09/29/njp-predictor-9-30/ Updates will be made throughout the night (last check at 10:51PM, our record was 43-2)

Congratulations to Jefferson Falcon Gianna Favata who got her 500th career dig this week. The senior is closing in on 200 for the 2022 fall season already and could be well on her way to eclipsing her 299 achieved in her junior year.. Kudos to this 4-year varsity player.

Ramsey Rams setter Courtney Currier got her 800th career assist this week. The senior has now set the Ramsey all-time record for career assists, a great accomplishments for a fine program.

Dayton’s Sam Janker surpassed 300 kills for her career this week. NJP believes the Bulldog’s Captain can can get to 400 before she ends her fantastic high school career this Fall. Tonight she had one kill but posted 7 aces in the Dayton win over Roselle as the Bulldogs improved to 11-1.

Danielle Suter from St. Thomas Aquinas has committed to play D2 volleyball at Millersville University. This versatile senior has played outside, setter, and libero for the Trojans and is a 4 year varsity starter. Way to go #25!!

Linden’s Jeannine Castro now has 500 career digs for the Tigers. This 4-year varsity starter still has a lot to achieve and we expect her to approach 700 before her season concludes. Congrats Jeannine!!!

It is always great to see NJ coaches facilitating taking their volleyball teams to see local NJ college volleyball games. It is so worth it to experience the speed, competitiveness, and environment of the college game landscape. The Old Bridge Knights (pictured below) visited Rutgers Newark to catch a game, build camaraderie, and have a great team building event.

#16 Colts Neck is now 10-0 after taking down Freehold Borough today in straight sets. Audrey Sousa showed strong leadership today putting up an amazing 7 blocks joined with 8 kills and an ace for Borough. FB put up a great fight, pushing the undefeated Cougars to 23 and 22 in the two sets. But Colts Neck is making their claim as one of the best teams at the shore and maybe in the state of NJ. Their big win over #23 East Brunswick last week clearly identified this team as a Top 20 in NJ and Top 3 at the shore. The mixture of Alex Foley, Sophia Koval, Brooke Lombardo, Maddy McSorely, Stacey Mancino, and Savannah Butz are a formidable starting six and a top contender in Central Group 3.

Another great showing for #13 Livingston today as they turn back #25 MKA in straight sets. Livingston possesses the best record in NJ at 13-0. Junior Nadia Khalaj is having a breakout season and fired 12 kills to bring her yearly total to 86. Isabela Ubrig posted 25 assists and both Anika Dhar and Camila Dong smashed 7 kills each. Cadence Stewart was a demon on the back line for the Lancers lifting 14 digs.

Tenafly with another strong blowout win against a very solid Ridgewood squad. The #4 Tigers limited the Maroons to just 21 overall points in two sets. Wake Forest D1 Basketball commit Rylie Theuerkauf led the way today with 11 kills and Sofia Bell smashed 9 kills of her own. The Tigers are putting together a fantastic season and we already have 10/12 circled on the calendar when they face River Dell at RDHS.

Nice job by Cranford today as they improve to 6-2 and are quietly emerging as a force in the UCC. The Cougars knocked off Union for the second time this season and will face Summit next, a team they beat in three sets on 9/16. Should be a good one. Seniors KelliAnn Keough, Katie Bendert, Meghan Turner, and Molly Walsh are anchoring a senior-rich squad that can really make some noise this season and are a team to watch.

#27 Emerson is now 10-0 after taking down Midland Park in three sets. It was a great job by Midland Park (0-8) to stay close with the undefeated Cavos as they took the second set 25-19. Amelia Goodell of the Panthers had 3 blocks, 4 kills, and 3 aces in the loss.

Bergen Tech remained undefeated today with a straight set win over Holy Angels. Bryanna Purisima notched 28 assists in the match and Riley Sobel lifted 21 digs. Riley and Anastasia Kelnik had 8 kills and a block up front for the #14 Knights. Tech is 12-0 and preparing a potential showdown on 10/19 with Fair Lawn, a team with the potential to knock them from the unbeaten ranks. Stay tuned.

McNair is riding high after taking down perennial power Hudson Catholic for the second time this season. Senior Beyonce Castro, a 4-year varsity player, has been an all-star this season and having an incredible final high school year on the court. She added another 8 kills, 2 blocks, and 2 aces to her senior CV.

#2 River Dell was outstanding today as they blasted Ramapo in Big North action. Erin McCabe was the star for the Hawks with 13 kills and a block. Alicia Idiculla added 7 aces and 5 kills for RD as they improve to 9-0.

Brookelyn Talmadge with another banner performance today against Fair Lawn posting 14 kills and a block in IHA’s one-sided win. Abby Romero and Grace Coughlin each slotted 11 digs as part of a great defensive showing by the Blue Eagles who are now 12-1 overall and 12-0 in New Jersey.

Big effort by Amy Castillo tonight as she smoked 21 kills for Union City in their win over Memorial. Scarlett Torres added 28 assists for the Eagles who are now 11-1.

Toms River South knocked off Manchester Township tonight in three sets in a close shore battle. Jordyn Lynch and Sofia D’Arcangelo each had 5 aces and Jordan Motyka slammed 8 kills as TRS jumped up to 8-3 overall this Fall. Cameron McEwan lifted 13 digs for the Indians who are preparing for some season defining games coming up on the schedule in the next 10 days against Brick, TRN, and Southern.

Paul VI pounded Eastern in straight sets to boost their record to 12-0 for the season. The Eagles have been a real force this Fall and despite a #6 ranking, has been as good as any team in NJ. They will face an undefeated Princeton team on next Saturday, 10/8, which could be an interesting match-up, but we do expect Paul VI to dominate.

And lastly, #10 Westfield rallies to a 9-0 start to their season with an impressive straight set win over East Brunswick. In one week, the Blue Devils will play #20 Hunterdon Central, #24 North Hunterdon and #8 Williamstown in a quad match. Sophomore Caterina Carayannapoulos is having a breakout season combined with solid upperclass talent including juniors Caitlin Cabrales, Olivia Calandra, Guiliana Gallo, Abby Pevzner, and Chloe Wiedman as well as seniors Jess Currie, Ally Muller, and Carly Rodrigues. Go Blue Devils.

Williamstown visits Immaculate Heart tomorrow morning at 10:30AM. You won’t want to miss that one!!! It’s been 5 years to the day that these two teams last matched up.