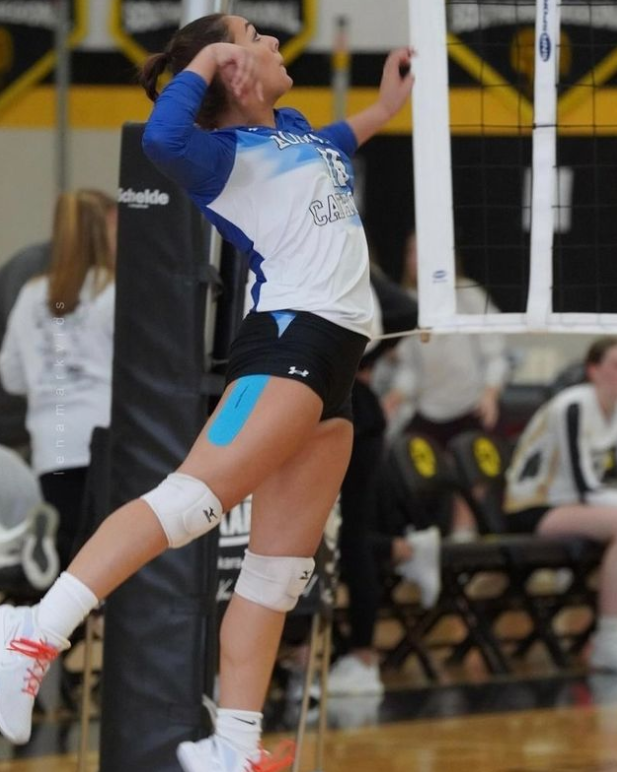 Let’s recap some of the weekend action before we jump into tonight’s schedule:

North Hunterdon had a glorious weekend in the Hunterdon/Warren/Sussex tournament. The Lions roared in the semi-final as they dropped cross town foes Hunterdon Central in straight sets. They then faced unbeaten Sparta in the final in what turned out to be one of the most competitive matches all season. Sparta routed the Lions in the first set and it appeared that the #5 Spartans were in for a quick victory. But North settled in in the second set, taking it point at a time and went to work. Brooke Logar orchestrated the comeback with Colleen Russell and Emma Murry taking control of the attack. The set went to extra time with the never-say-die Lions eventually prevailing 29-27. Sparta took the early lead in the third and deciding set but Coach Kurt Hissner’s group showed amazing resiliency and continued their fight for the title. Sparta’s momentum was thwarted by a NH run that gave them the lead midway through the set. Kat Loya was instrumental in the third set comeback but the Spartans and the Lions still traded points through 30-30. Sparta jumped ahead by 1 but NH took the last three points to prevail 33-31. Murry, Logar, and Sam Wilton played spirited defense tallying a combined 47 digs of the 64 tallied for the match by Northern Highland. Colleen Russell had 4 blocks for the Lions as well. Congrats to Brooke Logar on coming away with well deserved MVP honors.

Union City, who was having an incredible 19-2 season, put the icing on the cake with with a straight set victory over arch-rival Hudson Catholic. The Hawks had built a six game win streak in county finals coming into the match but the Soaring Eagles emerged victorious. Amy Castillo, once again, was a star on the attack muscling 9 kills and one block and raising her season kills total to 243as well as passing 300 career kills. Elena Mora Perez added 7 kills for the game and is now just short of 100 for the season. Scarlett Torres added 17 assists and 6 digs in the big win and Ana Vargas had 3 blocks and 2 kills.

Another close tournament match between Livingston and Verona in the SEC. The Essex county championship was decided in two super close sets with the Lancers taking home the title at their home court. Isabella Ubrig scattered her attackers and beat the Hillbillies with her well rounded offense. Nadia Khalaj posted 6 kills and Anika Dhar, Camilla Dong, and Erica Wang each had 5 kills for the Lancers. Patricia Rakova of Verona led all attackers with 13 kills. Livingston improved to 20-2 while Verona dropped to 19-5.

Sunday’s schedule included 2 games, both tournament championships. The Bergen County tournament final was in the morning slate and the MCT Final was in the afternoon. Let’s start in the AM… Immaculate Heart facing Bogota was the long awaited matchup and it did not disappoint as these two power teams battled through three sets. IHA entered the match undefeated in NJ play, 24-1 overall, and a lone loss to PA power Pope John Paul in three sets. Bogota entered 21-1 with their only loss to IHA at the beginning of October. IHA has been a cut above the rest in NJ so far this season and appears to be the team to beat for #1 honors in the state as playoffs approach. They have a well balanced attack, strong defense, and can block against the best offensive charges. Bogota plays great defense as well but relies on its two stars to provide the vast majority of their attack. Ashanna Caviness has over 300 kills this season and she posted 22 for this match. Outside Angelina Buhler had her best performance of her career adding 14 kills as she quickly is approaching 300 for her career. In this match-up, IHA showed grit, determination, and a wide variety of deep talent from all of their players on the court. Brookelyn Talmadge was energetic and acrobatic posting 12 kills and 4 blocks. Khalia Content was a monster on defense as she put up 6 big blocks that not only generated points put raised the level enthusiasm on her team. Grace Coughlin and Julio Sobilo each had 6 kills while Abby Romero posted a game high 17 digs. Grace Coughlin and Eve Roman combined for 29 additional digs while Kalena Stavish proved she is among the best setters in NJ with 28 assists, 2 blocks, 2 kills, and 5 service points. IHA will now finish off their schedule against all of the top non-public teams in their bracket but already have signature wins against top public squads Demarest, Old Tappan (2x), Ridgewood, Union Catholic, St. John Vianney, Fair Lawn, Roxbury. Williamstown, Bogota and Bergen Tech. They may get a shot at Paul VI in the state tourney but Southern would have been a great matchup. It’s a strong, strong case for #1 overall if they can sweep the non-public bracket. In fact, they may even be able to lose in a final and still end up at number one depending on the results of other tournament. We would not expect that!

#3 seed Montville was heavily favored to bring down the Cinderella Morris Knolls Golden Eagles in the MCT final Sunday. After a close first set, the Mustangs pulled away with a straight set win. Montville is now 17-3 heading into states. The Mustangs were powered all season by the amazing play of Katherine Gorski who earned MVP for the game. But a big difference in Montville’s success this year has been driven combining Gorski and the play of sophomore Cassandra Chauhan on the attack. Putting these two fireballs together with ace setter Michaela Voit has been a lethal combination for the Mustangs.

Westfield continued their winning ways as they took down Governor Livingston in straight sets today. Caitlyn Cabrales and Ally Muller led the attack and Gulliana Gallo dug 13 to lead all players. The Blue Devils are now 18-1.

Rahway knocked off Cranford today in two straight. Dennicy Mota had 7 kills and Ashley Oinedo-Herrera had 3 aces, 3 kills, 14 assists and 10 digs for Rahway. Janayah Diggs was outstanding at middle for Rahway putting back 6 blocks while destiny Rivera dug 15. Rahway improved to 14-5 on the season.

Please note, if you are headed out to Bergen Tech for the Tech Tournament final on Tuesday, the game is at 2PM not 3PM as listed on the master schedule.