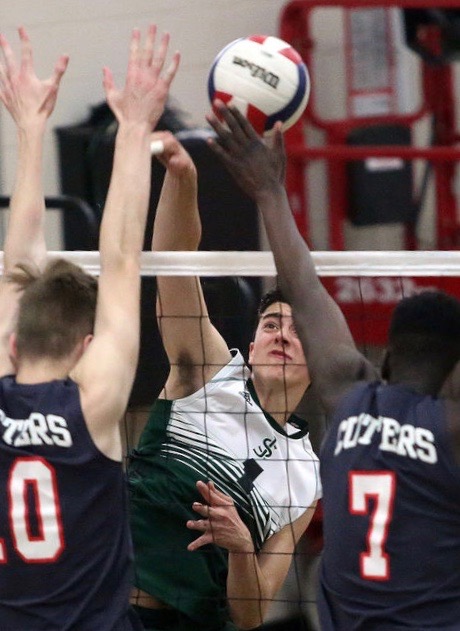 St. Joe’s will have a golden opportunity this year to win the Central Sectional and make a run at a state championship. With NJP’s current #2 Preseason Ranking, The Falcons are a talented group of athletes and are positioned to make their mark in 2020. One of those talented group members is Christian Trevino. Christian is now a junior and ready to improve on his sophomore breakout season.

In 2019, Christian had 138 kills, 30 blocks, and 110 digs. He made an amazing impact as a sophomore and continues to raise his talent level. He currently plays for the Warren Sixpack 17-1 team who has just been unstoppable this club season. In fact, they just went into the Atlantic City Invitational tournament at the 18U level and came home with the Championship medals.

We asked Christian about what has been the key to success for the 17-1 team and without hesitation he felt some recent additions to the team have put them over the top. “Our Club team has been playing very well ever since we moved up Aaron LaPlaca (Old Bridge), James Pridmore (Colts Neck), and Ryan Thenell (West Milford)” said Christian. These additions to an already stacked squad has made the 17-1’s as good as any Club team in NJ, with the exception of the Sixpack 18-1’s but we would really like to see that matchup before conceding.

Christian was the lone sophomore on the Falcons varsity squad last year and he will benefit from senior teammates Thomas Young, Vaughn McConnell, and Justin Monahan who are poised to succeed in their final year. It will be a fun season to watch…

Here is our interview with Christian…

Hi Christian… tell us your background?

My name is Christian Trevino, from Rahway NJ. I am a junior at St. Joseph HS in Metuchen.

I have been playing volleyball since I was in 8th grade.

I originally thought volleyball was such a boring sport, then in 8th grade, my Dad asked me if I wanted to tryout for Warren Sixpack, and I have been in love with the sport ever since.

My entire family is very supportive. My grandfather and my parents have come to just about all of my club, beach and HS volleyball games.

I believe my high school team will do very well in the upcoming season. We have many returning players and a great team of coaches. Our keys to success will be ball control and serving.

The athletic and academic aspects of my school are very strong. We have a gym filled with banners of state and conference titles in all sports.

Old Bridge HS’s Andrew Zaleck and Justin Tuohy were the two toughest competitors we faced last season. It didn’t matter if we knew that Justin was going to set Andrew, he would always put the ball down.

I plan on playing in college, preferably at an engineering school.

I would say our biggest rivals are Southern, Fair Lawn, and Old Bridge.

I enjoy playing Rainbow Six Siege on my computer in my free time.

In the off season I play for Warren Sixpack, in the summer I play beach volleyball with my partner Jay Hyman, and I watch volleyball all the time on Youtube and I go to a lot of college games.

My favorite parts of the NJP website are how organized all the stats are, the updates on club tournaments, and how there are rosters for the club teams.

My favorite professional volleyball player is Matt Anderson. He can switch between outside and right side with no problem and is a very reliable hitter.

I started as a middle at 14’s, then I switched to the right side for 15’s and most of 16’s, then at 16’s nationals I switched to outside and that is my current position. My partner Jay Hyman and I have played in the past 2 years at nationals for indoor and beach.