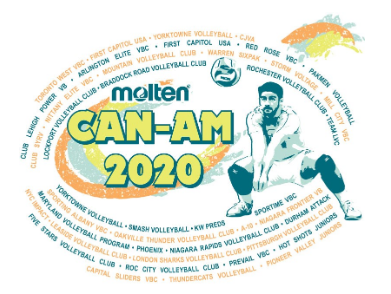 The Rochester NY 2020 Bid Tournament continues today and here is a quick update on the status of NJ teams:

At the 18 Open level, Warren SixPack’s 18-1 team won the Championship and earning a bid to Nationals. They were perfect and did not lose a set in tournament. Amazing performance! Congrats to the entire group of players Griffin Fieseler, Chris Larkin, Alex Work, Vaughn McConnell, Justin Monahan, Jon Bernstein, Drew D’Agastino, Justin Wright, and Tobey Ezeonu. (Mark Berry and Jack Centeno not pictured)

At 18 USA level, SixPack 18-2 won the championship match yesterday as they did not lose a set. Report from the scene: This weekend at the Rochester Can-Am 2020 Tournament, 18-2 competed in the USA division and took home first place. Thanks to their amazing Coaches, Head Coach Drew Castleman and Assistant Coach Brian Brzoska. Major contributions from Andrew Guaragno, Jonny Ortega (Old Bridge), Shane Neilan (Jackson Memorial) and Sebastian Milewski (East Brunswick).

At the 16 Open level, Warren SixPack 16-1 qualified for the Gold bracket but was eliminated in quarter-final play.

At 16 USA, Warren SixPack 16-2 qualified for the Gold bracket but was eliminated in quarter-final play.

At the 15 Open level, Warren SixPack 15-1 has qualified for the Gold bracket and was eliminated in their quarter-final match.

Congratulations to all of these players and coaches for representing New Jersey so well!!! For complete details, visit: https://results.advancedeventsystems.com/event/PTAwMDAwMTk5NDY90/home