Gibbs Confident Bloomfield Will Be Back In Sectional Final 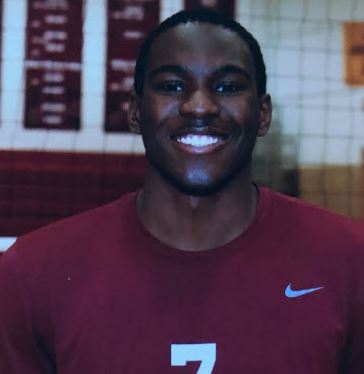 Confidence is so important in sports and especially in high school volleyball. Momentum can be crushed if players and leaders do not have the ability to bring their teams out of a temporary funk. Bloomfield’s Dante Gibbs exudes confidence! In his own ability and in the ability of his team.

The Bengals are coming off a great season. They finished 22-6, won the Essex County Tournament and finished in the top 15 in New Jersey. But they were eliminated in the sectional semi-finals by Fair Lawn and have lost a large senior class of varsity starters. But Bloomfield always finds a way to have a talented group waiting in the wings to step up and this year should be no different.

Dante posted over 100 kills and almost 40 blocks as a junior and will be the key man in the middle for the Bengals. We expect these numbers to jump up for his senior year and don’t be surprised to see Gibbs exceed the 200 mark in kills in 2020.

Gibbs has the perfect attitude as a leader for the Bengals. Don’t be surprised to see this team overachieve in 2020.

Here is our interview with Dante…

Tell us about yourself…

My name is Dante Gibbs. I am 17 years old and I attend Bloomfield High school. I’ve played volleyball since I was a freshman. What initially made me take up volleyball was my volleyball coach Louis Stevens. He saw that I played basketball and football at the time and thought that would be great to play volleyball. At the time I had never touched a volleyball, but I said why not and tried out. Also my friends tried out with me and I feel like that inspired me to play also.

I am a 6’0, 170 lb middle hitter and play a little outside and opposite. I’ve played for my school’s varsity team since sophomore year. My junior year (last year) we won our counties and made it to the Final 4 in our Sectional last year. I feel like we have to build on that as a team and not let that get squandered by complacency.

My Mom, Dad, Grandmother, and my Great Grandmother. They are at almost all my games and when they are it’s one of the reasons I play so hard and always want to do my best on the court. I simply just want to make them proud and put on a show for them.

How will your high school team do in the upcoming season? Do you have a lot of returning players?

I think we are going to do great. We lost some great players due to graduation, but that doesn’t make us any less of the team we were last year. I expect the team we have coming back to put us in the same spot to succeed like we did last year. It’s really just next man up and who’s going to fill that work load.

What will be the key to success?

What’s the key to our success is not beating ourselves. I truly feel  we have a solid team that can go blow for blow with any team in NJ and that if we limit our own mistakes and just play volleyball to the best of our ability, we are State Champions at the end of the upcoming season.

My teammate Alnazir Cobb. He’s one of my best friends off the court. I’ve known him since 7th grade through school and football. When we step on the court together, we don’t think of it as a game and we are trying to beat the other team, we think of it as us just getting a chance to have fun and play volleyball together. Also, he is a very good volleyball player and is very competitive like me. Having that helps push each other and makes me a better player in the long run. Also my other teammate and best friend Alex Camacho. Even games when I was doing so great, he would always have my back. Tell me I’m good and just always be there for me.

What are your hobbies ?

I like to play video games with the guys, play basketball, and play football. I also like watching any college football game that are on.

My favorite story about volleyball was when we won the sectional championship last year . The reason I say that is because the previous year we came up short  in the championship game against Livingston. Obviously it hurts to lose and it’s just something that doesn’t sit well with you. So having that chip on my shoulder all year playing really helped me. It pushed me to work harder, get extra reps in, and always execute to my fullest, because at the end of the day it might come down to that last swing. In my case that is what happened. We were playing Livingston in the championship game, we had game point. They were serving. We got a great pass from our Libero, then a great 1 ball set from setter, and then I came down and pummeled the ball on the other side of Livingston. At that moment the team comes running over and the crowds screaming and just the energy in the room felt amazing to finally win something for a group of people that have been supporting you since day one  was a feeling you will never forget. It made me so happy to hold up the championship trophy at the end, because when we lost the year before I just thought, “why couldn’t that be us?” So as a team we fought through that whole season to get what was ours and I will never forget that.

What is the most impactful part of your game?

I feel like I’m great overall player but I’m a heavy hitter. I love to swing and I love to swing hard. Also I feel like I bring that energy factor to the team. If it’s from a big hit, big block, or great dig. When I do it, the team gets this spark in them. When I get that momentum behind me, I feel like I’m unstoppable on the court. Also, when I see my teammates down, I always pick my guys up. You can’t  let your teammates beat on themselves. You step up and just let them know it’s not over yet and push them until the game is over.

Something I would like fans to know about you ?