Dubtown’s Aiden Boorstein Confident Braves Will Be Back On Top 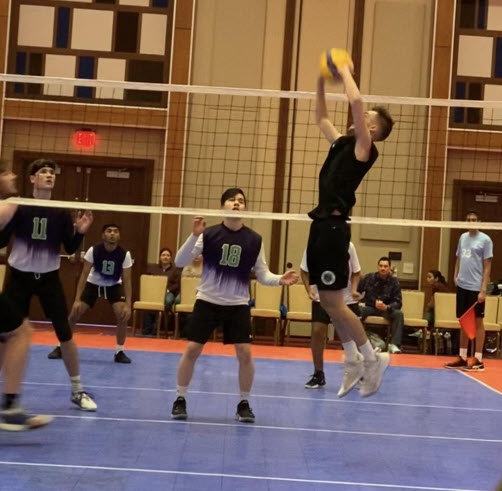 The Williamstown Braves had a rough season in 2019. The finished just under .500 at 12-14 and missed state playoffs. They lose just 4 players to graduation and have a strong core of returning juniors and seniors to fuel this seasons fire. Their quarterback is Aiden Boorstein the teams setter. We took some time to debrief with Aiden and get his thoughts on the team, his club, and his personal improvements.

Aiden joined the varsity team as a sophomore and was part of the 26-7 record put up by the Braves in 2018 and a strong playoff run that was ended by Southern. 2019 was year of emergence for Aiden as he took control of the offense as setter and racked up over 500 assists as a junior.

We expect the Braves to have a number of weapons on the attack for 2020 which should position Aiden to improve his assist numbers and get Williamstown back to state playoffs. The senior appears very ready to lead and is doing the hard work to insure his teams success.

During the Winter, Aiden has been playing Club at SJVBC. He increased his role significantly on the 18-1 Elite squad when Liam Kreibel went down with a broken collarbone. And the team has performed very well against stiff competition, getting into the Gold bracket in the Atlantic City Invitational. Experiences like this will keep Aiden and other “Dubtown” players razor sharp by the opening of the high school season. We count 8 club players for the Braves playing SJVBC with four on the 18-1 Elite level team.

So hold on to your hat when Olympic American powers clash in April. With Clearview and Washington Township expected to have top 20 teams, and Kingsway and Eastern always around the top, the Braves will need to make a statement with some early season “Dubs” to insure the passage to playoffs. Aiden thinks they will get there… and NJP agrees. And we all know “anything” can happen come the third week of May…

Here is our interview with Aiden…

My name is Aiden Boorstein. I attend Williamstown High School, graduating in 2020, and I am the setter for my volleyball team.

I started playing volleyball my freshman year because my friend Dan Riggins, who at the time I played soccer with, brought the idea up to try out “just for fun”. But as that freshman season progressed I ended up loving the sport.

I am 6’0, a setter, and play for Williamstown High School and South Jersey Volleyball Club.

Since I am a setter, going up against specific players on a team is not my specialty, but definitely some of the best I played against were Jaspreet “Jaz” Singh the middle from Eastern, Nick Poulson from Kingsway, and Brett Guentes from Washington Township.

Last season was a little bit of a struggle for our team with many of the varsity team being first year varsity players but I know this year we have a good chance of winning conference and going far in the playoffs. This year we have about 9 or 10 returning players so I think that will give us a huge advantage over many of the other teams in our conference. I think the key to success this season will be communication and chemistry, something we really struggled with last season.

I would love to play volleyball going into college but honestly if that doesn’t work out, I’m playing beach volleyball.

Our biggest rivals are definitely Washington Township and Kingsway. Every year when we play each other it is a very good game with very close scores.

Tell us about your club team and how the season is going thus far (If applicable).

Make sure to get your hair done this weekend... the NJ girls HS volleyball season starts MONDAY!!!! https://www.instagram.com/p/CL0RxKliba2/?igshid=1reiqin8p8wx0

We are so excited about the NJ girls high school season starting on Monday that we can just twist ourselves into a pretzel and eat our tail... https://www.instagram.com/p/CL0RcAPiwdA/?igshid=sv3wb54s3itl

Off the block does such an amazing job of tracking polls and standings for Men’s College volleyball...check it out... http://www.offtheblockblog.com/rankings_standings/

Typical GCU fan getting ready to watch the volleyball match this afternoon on the livestream. Congrats to the team for their third straight win! Go Lions!!! https://www.instagram.com/p/CLyIgyKi6qF/?igshid=sjenf1hgv8i9

NJIT men looking truly dominant this evening with a 25-15 second set victory. Luca Berger is on fire hitting .727 with 8 kills and 3 aces.

Who Will Be NJ’s Best Libero in 2021? NJP Thinks Konrad Bieniek Has The Stuff!