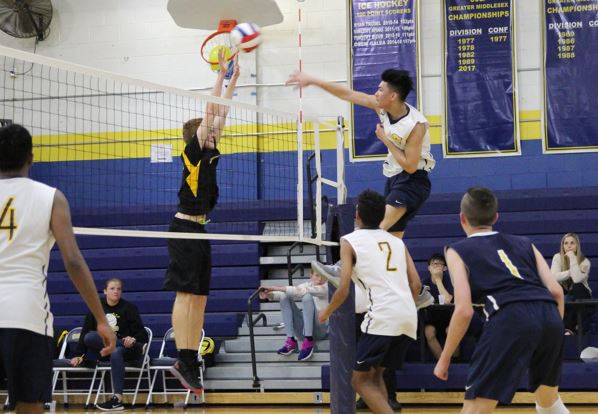 Colonia is uniquely positioned to have an amazing 2020 high school season. In 2019, they were 23-8 and finished the year ranked #19 in the state. They lose just two seniors and retain 88% of their statistical points. They have earned a #3 NJP preseason ranking. A big reason for that is the versatile and dynamic play of Senior Claudio Suwu.

Last season, Claudio put up some monster numbers. On the attack, he had 269 kills and 33 blocks. He also registered 25 aces. Defensively, he had an outstanding season as well with 146 digs. This is not new for Claudio as he has been making these types of contributions since Freshman year and has consistently gotten better each year he has played. He is clearly one of the NJ elite when it comes to volleyball.

The Patriots have built their squad around Suwu’s talent the past three years. He was a setter his freshman year with almost 200 assists and still managed 123 kills. And his sophomore year was even better with strong numbers in every category. But this years team has many pieces of the puzzle coming together. Six seniors including Michael Krepula and Raihaan Rizwan along with 2 solid juniors, setter Sneh Shah and also libero Andrew Lukaszewski who finished top 5 in NJ.com’s best sophomore voting. Their starting lineup matches up with any team in NJ.

There is a quiet confidence that you feel from Claudio, especially when he speaks about the Patriots chances for the upcoming season. As we look at the squad, and with Claudio leading the way and setting the tone, NJP is a believer.

Here is our interview with Claudio…

My name is Claudio Suwu. I’m a senior at Colonia High School.

My cousins got me into playing volleyball in the 7th grade because they would always play it in the summer when I go and visit them in New York.

I’m 6 feet and 2 inches tall, I have a 40 in vert, I play Outside and Opposite and I used to set Freshmen year. I like playing outside the most.

How will your high school team do in the upcoming season? Do you have a lot of returning players?

I’m extremely confident this upcoming season. We are losing only one senior but he is one of our key hitters in our offense. Our ultimate goal is to win every game possible, make it into the State Finals, and win.

What will be the key to success?

I think the key to success this year is focusing on detail and practicing the little things that make a big impact on the game.

Which team last season was the toughest competitor that you faced?

The power house Old Bridge… we couldn’t get a win against them.

I won All-Division and All-Conference.

My Favorite volleyball player is Earvin Ngapeth because of his unique and crazy ways to score for his team.

Getting 18 kills against Bloomfield on my 18th birthday. One of my best games I played last year.

My Nickname is Cloud 9, because I fly when I jump and my jersey number is 9. The nickname was given to me by the upperclassmen when I was a freshman.

Do you plan to play volleyball in college and if so, which one?

I am trying to play anywhere really but I would love to attend St. Francis College in Brooklyn and be a part of the new D1 program started this season.