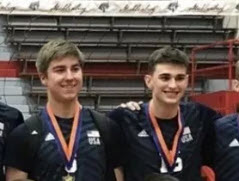 The stars seem to be aligning for the 2020 Northern Burlington Greyhounds. Last years squad had a slew of junior and sophomores who made major contributions and they appear poised for a breakout season. Leading the way for the Greyhounds is senior Jake Fryc who had a really outstanding junior year.

The Greyhounds finished the year at 12-13 which earned them a #89 ranking in the middle of the pack in NJ high school volleyball. NJP projects Northern Burlington will move into the top 50 and certainly has the potential to be even higher if the team gels as expected. Pre-season report link here: https://njpowerranking.com/northern-burlington-2020-psr/

Jake led the teams in kills, blocks and aces last year. And was a close second on assists to setter Erik Koller. This is a credit to Jake’s versatility and athleticism. His 6’6″ frame doesn’t hurt.

During the off-season, Jake has raised his game playing at the Lehigh Valley Power. Team Inferno has caught fire during the winter, winning tournaments at the 18U elite level, and has set the bar for what Jake wants to accomplish in the Spring.

Here is our interview with Jake…

Tell us a bit about yourself Jake?

I live in Chesterfield, NJ and attend Northern Burlington Regional high school and will be graduating class of 2020.

I was inspired to play after watching my dad play on our sand beach court in the backyard for years. After starting to play with him at 14, I realized how natural volleyball came to me.

What’s your favorite position to play?

For my club team I mostly set, but for my high school team I set and play right side which is my favorite because I get to hit more.

Which Club team to you play for?

I play for Club Lehigh Power Inferno during the club season.

No doubt the toughest competitor I faced last year was my friend and club teammate Cayden Kelty on Rancocas Valley due to his knowledge of how I play and his hitting and blocking abilities.

How will your high school team do in the upcoming season?

I feel very confident about Northerns team this year. We have a lot of returning players and a lot of returning talent. Alongside my setter Erik Koller, we run a 6-2 with good hitters like our middle Mike Maruca and our outsides Brayden Messinger and Connor Mulryne. No doubt we expect a lot out of this year.

The people who help me the most and push me to do my best at everything are my mom and dad.

Last year I had the privilege to be nominated first team all county for Burlington county. I was also in the running for top Junior last year in the state.

No doubt my biggest rival is Rancocas Valley. Every year we go 1-1 with them but this year I feel we’re gonna take both games.