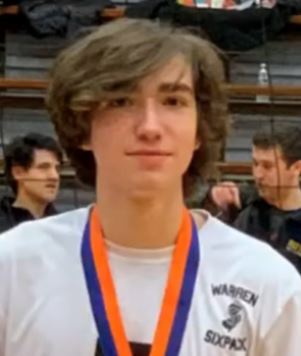 NJP is projecting Jackson Memorial to have an outstanding year and Ben Fryc is expected to be a big part of their success. The Jaguars lose just two seniors from the varsity squad, have over 90% of their stats returning, and in addition to some very talented seniors such as Nick and Alex Furlong, Matt and Ryan Mahala, Frank Saverse and Shane Neilan, they also have two of the top 17 level juniors Konrad Beiniek and Ben Fryc as part of the squad.

Ben slotted into the starting opposite hitter role last season and put up 86 kills and 21 blocks as a sophomore. He was second on the team in kills and we can expect this number to jump up for his junior year. He has played on one of the top 17 club teams in the nation during the winter. The Warren Sixpack 17-1 teams success has been extraordinary and they will seek a bid in Richmond in April to the AAU Junior Championship.

Ben started on the varsity team since freshman year, had a great sophomore campaign, and we expect a breakout junior season ahead. This should be a fun year for Ben and the entire Jaguar team as the stars have aligned with an abundance of talent all at one time. What a horrible problem to have for Coach Jason Ulrich who has built the program over the last 5 years since inception. I am sure the entire program will enjoy the ride…

Our math formula for preseason rankings has the Jaguars at #3 overall. They are ahead of Old Bridge and Southern as well as Bridgewater and St. Joe’s. Based on their talent level… the math looks right!

Here is our interview with Ben…

Hi Ben. Tell us a bit about yourself? (What school do you attend, what town do you live? What year are you graduating?, family?, etc…)

My name is Ben Fryc. I attend Jackson Memorial High School and I am a member of the Class of 2021. I live in Jackson, New Jersey. My current position is an Opposite Hitter. I currently play for the club team Warren Sixpack, on the 17-1 team.

I started attending volleyball clinics when I was in 3rd grade, 10 years old. I have been playing on the Warren Sixpack national team since I was 12. Volleyball is our family sport. My dad has been playing volleyball for most of his life and he has always encouraged me to try it out and after giving it a shot, I developed a love for the sport. My sister, Alexis, has also played on club and high school teams.

I enjoy being on the other side of the net, facing my club teammates. The toughest competitor that I faced last high school season was my good friend Jake Walsh from Wall High School. The chemistry from the club team translates into fierce competition in the high school games. Jake is a great middle hitter and a strong blocker and I prefer to have him on my side of the court.

I feel that my school team will go far in the upcoming season and have a great shot at winning the shore conference. We will have many returning players, most of which are seniors, and we will have five club players, all playing for Warren Sixpack. In addition to the existing club chemistry, our team also includes a sibling correlation due to the fact that our team includes two sets of twins, Alex and Nick Furlong, as well as Ryan and Matt Mahala, all four great players. Another key to success will be to remain mentally strong and to minimize our mistakes during this high school season.

My high school coach, Coach Jason Ulrich, has been my gym teacher and track coach in Goetz middle school. He was the main force in bringing a boys volleyball team to Jackson Memorial. I first met Coach Ulrich during the Jackson summer volleyball camp in 3rd grade and he has been my guide and mentor throughout my high school volleyball career. He always encourages us to do our best on and off the court, taking pride and excelling in all that we do in our lives.

Coach Pedro Trevino, the travel coach for my Warren Sixpack team has been leading our team for the past three years. He always encourages us to work hard and play even harder, to succeed against some of the best club teams in the nation, and to keep our heads up during tough competitions. Thanks to Pedro’s influence, our team has enjoyed playing together, encouraging each other, and having fun off the court as a group of friends. At the same time, under Pedro’s leadership, our team has played at the open level at Nationals since he has been our coach.

I plan on playing in college, however I would rather play on a club team and focus on academics.

I enjoy playing guitar and outdoor activities such as hiking and snowboarding.

I was playing as a Middle until this year. Coach Ulrich decided to put me as Opposite on the high school team and it quickly became my new favorite position.

Though I love all my teammates, my favorite is Konrad Bieniek, who is my teammate on both Warren Sixpack and the high school team. We have been playing together since we met at Coach Ulrich’s Jackson summer volleyball camp when we were both 10, and have been friends ever since. Konrad is an amazing libero, great person, and helps to lighten the mood during a stressful match.