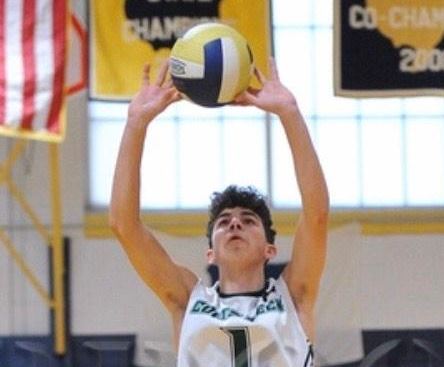 Dante Cano is one of the top setter in NJ and it certainly showed last season. The Cougars started off like a rocket winning 6 of their first 7 games. After 8 games, Dante totaled 185 assists averaging over 23 a game and then an injury sidelined Dante for a week. His role changed after that as the team shifted to a 6-2 and Dante had a chance to contribute in other ways to the teams success as well as serving as a dual setter. But this change and some other lineup adjustments yielded a 6-7 finish the rest of the way culminating in an end of season loss to Bridgewater Raritan in state playoffs.

Cano has been honing his skills at the club level this winter playing for the Warren Sixpack 18-2 team who has been extremely successful and gained a bid to Nationals in Reno, Nevada in July at the USA level. Dante is hoping to bring that confidence and swagger to his Colts Neck teammates to drive them to a successful campaign in 2020.

The Cougars had a really strong 2019 campaign despite their 13-10 record. They had some solid wins over some very good teams including Jackson Memorial twice, Marlboro twice, Wall and CBA, but a schedule filled with shore and central foes always makes it tough. These are the teams Colts Neck lost to last season: Southern, Bridgewater, Howell (2x), Wall, East Brunswick, CBA, and Old Bridge which were all top teams in 2019. Three of those losses were in three sets. So it appears that they were just a few points away per game of being a top contender in the state rankings.

They have lost a ton of talent to graduation and retain just 23% of their statistical points. But Dante remains positive about the teams chances this season and feels very confident that the team will outperform on the NJP preseason rankings.

Here is our interview with Dante…

Dante… Tell us a bit about yourself? (What school do you attend, what town do you live? What year are you graduating?, family?, etc…)

I live in Marlboro with my Mom, Dad, and two sisters. I go to Colts Neck High School and am graduating this year.

I’ve been playing since my sophomore year. I was originally a soccer player but a couple of kids from the area and from my school convinced me to try out for volleyball so I’ve been volleyball focused ever since.

Andrew Zaleck was probably the toughest competitor but we played a lot of good players so it’s hard to say.

Due to losing upwards of 10 seniors last year, a lot of people have counted us out for the upcoming season but I would disagree. We have a good core and the tools to have a successful season.

Colts Neck is a small school (my senior class graduating size is about 300 students) compared to neighboring schools like Marlboro or CBA. We’re in the Shore Conference and specifically the A-North division.

In the past, schools like Howell or CBA have been our biggest rivals, but really any top school in the shore conference is a big rival of ours, especially this year with a conference that looks pretty open for the taking.

What do you do during the offseason to stay in shape and prepare for next year? (Club team? Workouts? Watch VB vids? Go to College games?) Do you play other sports? (if so, which ones?)

I keep active as much as I can whether it be through soccer, basketball, or going to the gym. I also play on my club team, Sixpack 18-2, where we regularly participate in tournaments. This keeps me in shape and ready for when the season comes.

If you could pick any place to have a volleyball tourney, where would it be and against who?

If I could, I would like for a school tournament to be either up at North Jersey or in deep South Jersey. My team’s schedule consists of almost entirely Central Jersey teams. There is a lot of great talent both in North and South Jersey that I don’t get to see at all because of lack of opportunity, so if I could, I would love to enter a tournament with the top teams of both regions.