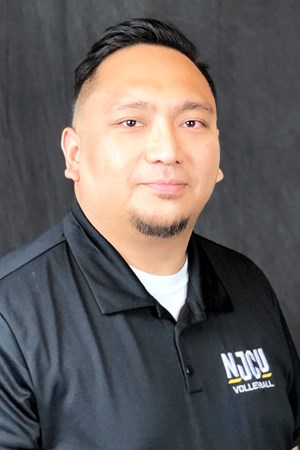 Coach Carlo Edra brings a lot to the table… Strong volleyball roots in NJ, a wealth of volleyball coaching experience including at the professional level, and a passion for the sport that is second to none. When you meet Coach Edra, he is just the kind of person that you want to Coach your son. He brings his strong family values to his coaching style and understands the life lessons that volleyball can bring to a students life other than the wins and losses.

In his return to NJCU, he is molding a young and aggressive group of players who are mostly underclassman. The next two years should be a great time for the Gothic Knights. This year, the team has been very good sporting an 8-8 record and engaged in a number of matches with ranked teams where they fell just short of getting a W. It’s just a matter of time before we see NJCU back in the hunt for a Skyline championship. Maybe even sooner than anyone thinks…

Here is our interview with Coach Carlo…

Hi Coach Carlo…Fill us in on your background…

I come from a volleyball rich family. My father played for the national team in the Philippines and my mother was the star of her high school team. My brother Chris played for Warren Sixpack, was an all-state player at JP Stevens and was a nationally recognized libero at NJCU where he holds the all-time dig record. My wife Nicole also played at JP Stevens and The College of Mount Saint Vincent (a rival school of NJCU). I also have some cousins who played at Clearview, Bridgewater Raritan, Old Bridge and I even have family out in Illinois who played high school and club ball.

Me personally, I was the first captain in JP Stevens history (my senior year was the first year of volleyball at the high school). I never played for Warren Sixpack but I did practice with them a couple of times. I never thought I was good enough to play college but the head coach at the time, Christopher Feliciano (currently head coach at the University of New Hampshire), saw me play at an open gym and recruited me for NJCU. I had 3 years of eligibility when I transferred over and started at libero all 3 seasons. My first year playing was a humbling experience because I never realized how good the country was at volleyball. We kept up with some top teams but couldn’t pull out wins my second year. My final year playing was where it all came together. Because that team stayed together for 3 full seasons, we became one of the top teams in the country. Playing in college was one of the greatest experiences of my life and those teammates are still my best friends to this day.

What motivated you to become a college volleyball coach?

I think it’s the whole process of competing. You physically and mentally prepare yourself with practice. You scout teams, find their weaknesses and form strategies around them. During the match, you’re playing a game of chess against another coach.

Tell us about the NJCU Knights this year and where do you expect to finish?

I’m very fortunate to have the opportunity to coach these guys. I have an 18-player roster, 12 of which are underclassmen. The future is bright for this program. We’re a bit inconsistent right now at 8-8 but these guys are a young team, have had to learn a brand new system and new way to play volleyball. We can clearly see flashes of what we are capable of during the season. We took sets from a top 5 team (Rutgers-Newark) and a Division 1 team (St. Francis Brooklyn) but we just can’t hold it together for a full match. The coaching staff and I are not worried because we’ll have it figured it out come conference playoff time.

WORK ON YOUR FOOTWORK! Everyone thinks volleyball is about the upper body. For example, using your platform and hands to pass/set and using your arms to swing at the ball. Volleyball is played with your bottom half first. To get to a ball so you can pass or set it, you need to move your feet to get behind or under it. To swing at a ball, first you have to take an approach.

Tell us about your involvement with Team Freedom and the professional league (NVA)?

I resigned from NJCU in 2011. I went YEARS before I officially coached again but I did do some consulting with some special athletes in the meantime: Besmir Arslani (2 time All-American at Kean University) and Piotr Namiotko (NJIT Opposite). They kept me somewhat sharp with all our interactions, conversations and court time together. In 2018, Justin Beaumont (owner and general manager of Team Freedom) needed a coach for Team Freedom. He felt my personality and way of coaching would be a great fit for the team, I accepted and the rest is history. In 2018 and 2019, we finished 2nd and 5th in the USAV Open National Championships. Luckily for us, the National Volleyball Association (https://nvausa.com/) chose us to join the league for the upcoming season and we couldn’t be more excited!

For the most part during competition, players end up getting in their own way. They get aced, hit out, contact the net, etc. I just remind them that their biggest opponent is themselves and it doesn’t matter who is on the other side of the net.

I also have a saying, “Volleyball is a game and games are supposed to be fun.”

In college, you’re either playing for a scholarship or you used volleyball to get you in to a school of your choice. If you’re in the professional ranks, you’re playing for money. In high school, you’re playing because you love it so enjoy every second you have out there.

If I’m not doing something volleyball related, I spend the rest of my time with my wife and kids. They’re my life!

What is the biggest challenge that you have as a college volleyball coach?

Recruiting is always a challenge. You and all the other college coaches in the country are after the same guys. You have to figure out a way to make your school stand out above the rest.

March 5th, 2009. My brother and I lost our father to cancer so we were taking some time off from volleyball (I was the head coach and my brother was my libero). It was the day of his funeral and out of nowhere my brother and I realized our Dad would want us to get back out there. We had a match against Hunter College that evening and we decided to end our time off. We lost the first two sets and it looked like we were going to be going home early. Then something changed, we started getting to balls we had no business touching defensively and playing with a controlled aggression like I had never seen before. It was literally like the spirit of my Dad was moving my players where they needed to go. We pulled the match out in 5 and it was the most emotional and memorable experience I’ve ever had.

How would you describe your coaching style?

Off the court, I’m very analytical. There is a reason or purpose for any and every decision I make. During the matches, I wear my heart on my sleeve. If you make a play or work hard, I will get just as excited as the players do.

What kind of players do best with your coaching style?

If you play for me, you have to be able to take criticism and a thirst for wanting to get better. I’m very straight forward when it comes to telling you what needs to be done.

Are there any rule changes that you would like to see to better prepare NJ High School students for college?

This is easy! Go to 3 out of 5 sets for varsity matches. New Jersey did it for one season and immediately took it away. Do you know how many teams comeback from being down 2 sets to none?!

What makes you different than other coaches in your division?

I went 8 years between when I resigned from NJCU the first time and returned to the program this season. I’m OBSSESSED with the sport. When I had no professional involvement with volleyball, I was still playing any chance I had, watching high school and college matches and the hours of endless youtube videos.

How do you determine playing time on your team?

You practice how you play. If you stand out from your teammates in practice, you give the coaching staff confidence you can be trusted during the match.

What advice do you have for parents of players on high school teams?

Cheer for your child(ren) and their teams but leave the refs and coaches alone. Let them do their jobs.

Do you Coach at the club level as well? Which club and level?

I’ve always flirted with coaching club but never went for it. Throughout pre-season, non-traditional and official season, it’s an absolute grind and my family understands this. When I’m in the offseason, my family is where my attention is.

I’ve been a huge fan of Taylor Sander since his BYU days. In the world class level, he is undersized for the position but plays bigger than his size.

I think the only time I’m serious in life is when I’m coaching. When I play or outside of volleyball, I’m always joking around or laughing til it hurts.

Does the NJP site help you in your efforts to evaluate potential incoming talent?

I check the page daily to see which kids have committed to a college or who is still up in the air. Thanks for doing what you guys do!