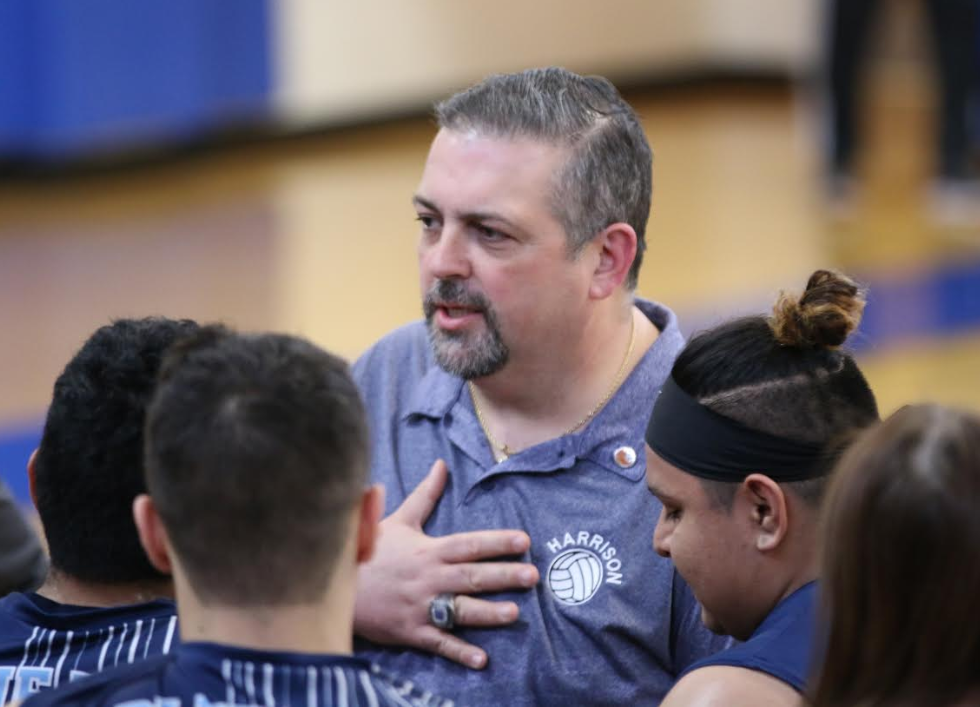 Coach Nick Landy from Harrison eclipsed the 200 win mark in 2018 and has been a figurehead in NJ High School Volleyball since 2006. He became the Bergen Record Coach of the Year in 2015 and received the same honor from NJ.Com in 2016.

Harrison is not the largest school in the North ll sectional. Their current enrollment of 525 leaves them 27th out of 39 schools in population. Despite the lower overall enrollment, the Blue Tide had 50 players show up for tryouts today. It’s a testament to the passion that the Coach and his staff have built in Harrison for Volleyball .

Coach has some nice varsity players returning for this season and will pull from a large JV and underclass group to fill out his squad. Harrison will be playing as an independent but will be participating in the Hudson County Tournament in May.

NJP has Harrison as a top 25 team in the preseason rankings for 2020. No doubt that Coach Landy will be pushing all of the buttons to drive this team to overachieve.

Here is our interview with Coach Landy…

Coach… Tell us a bit about yourself? What college did you attend, family?, former high school and club team?, experience, etc…

I am a graduate of NJCU with a degree in teaching. I did not have a volleyball team when I was in high school but I did take a volleyball class in Bergen Community College.

What motivated you to become a high school volleyball coach?

I had been a coach of various sports in high school which included assistant football, assistant boys basketball and JV baseball. I always wanted to coach volleyball so in 2006 I became the JV coach and in 2008 I took over as the head coach.

Always practice to be a volleyball player. Don’t tie yourself down to a specific position because you never know when you are going to need those skills in a game. From a mental standpoint, always think win win and be positive, you never know who you can beat. Unfortunately, we normally compete with our own thoughts. Also, leave all your troubles and drama in your gym bag. Don’t let them distract you from the match. As far as recruitment, be persistent and pester a coach if you need to work hard to get on that team.

Tell us about your team this year?

My team this year is full of seasoned veterans and some surprise additions. A number of my players have done some considerable work in the off season and I am excited about what this season has in store for us. Just like every other season I have coached, whatever the sport, we take each match or game one at a time and never look ahead. Always deal with the present.

Don’t just work on volleyball skills but get in shape both mentally and physically. Folks don’t expect a volleyball game to be hard on your physical and mental abilities but it is paramount to success. Also, regardless of your experience always work on the fundamentals of the game.

I try to be positive but let them know when they mess up or aren’t trying. I have a skill that allows me to read people and I am able to tailor my motivation not only to the team but individuals. I also try some crazy ideas once in a while like team building games and meditation.

Who were some of the best players to ever come out of the Harrison program?

Some of our best were Piotr Namiotko who improved every year and always worked to get those wins. David Penaherrea was an unassuming player who could do it all and did just that for us. Varinder Singh was a two year player who caught his stride halfway through his junior year and proved to be a monster for us. Kristof Oseicki was a player that came in knowing the game and helped our program greatly. Victor Narvaez was our first setter to achieve the milestone of 1,000 assists.

Try out this game it’s not the physical education game you see daily, it’s an incredible sport to be involved with that involves tremendous skill and ability

What is the biggest challenge that you have as a high school volleyball coach?

The biggest challenge I have had as a head volleyball coach is the transition from being a JV coach to a head coach there is a very different mentality involved, but I feel I kept a bit of the JV coach mentality and turned it into a hybrid type coach

My favorite stories have to be the year we won the Hudson County tournament and the sectional title. Those two moments which happened in the same year were awesome achievements for our program.