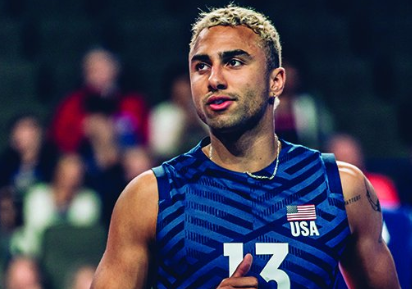 If you don’t think Ben Patch is one of the best players in the world, take a look at his highlight video below. He is currently playing professionally for the Berlin Recycling Volleys and has a laundry list of accomplishments for Team USA, BYU and a host of junior teams. He took the time today to put a video together to share his support and encouragement to the NJ volleyball community. Take a look here:

Ben grew up in Provo, Utah. He is the son of Mike and
Linda Patch and has three brothers. Patch has been in the USA Volleyball pipeline since he made the U.S. Youth National Team in 2011. In 2012, he was named the MVP of the NORCECA Men’s Under-21 Continental Championships as his team took the gold medal. In his freshman season at BYU in 2013, he was named the AVCA Newcomer of the Year and First Team All-American. In 2013, Patch went on a Latter Day Saints (LDS) mission to Columbus, Ohio. He returned early in 2015 and that summer, played on the U.S. Pan American Games and Pan American Cup teams. In 2017, he played his junior season for BYU and also started up a very successful photography brand. He has an absolutely insane vertical coupled with a 6′ 8″ frame. That’s a lethal combination combined with outstanding athleticism and brutally powerful right arm. As seen below by the flying #13…

Thanks so much for engaging the NJ audience! Greatly appreciated… Reach out to Ben at these links and please make sure to follow him and build his audience…