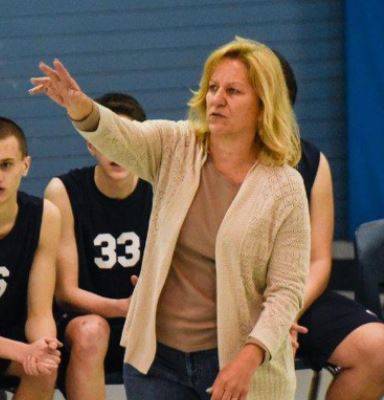 NJP is very fortunate to connect with passionate volleyball leaders in our state. We feel especially honored to have Monica Slattery from CBA joins us to share her thoughts as well as give us some insights on her volleyball origins. It’s also hard to believe she started coaching 36 years ago. Time flies when you are having fun.

CBA is in a unique position this year. They have been a perennial powerhouse at the shore but missed state playoffs last year. They have some high flying sophomores and juniors coming up through the ranks and we expect them to be top 25, playoff bound and much improved this year and fighting for a state championship in 2021.

It was great to hear some stories from Boys volleyball beginnings in New Jersey. Coach Slattery started up “two” of the best programs in NJ. And has the satisfaction of building a stable of former players she has mentored over the years that is tough to top.

Here is our interview with Coach Monica Slattery…

Hi Coach Monica… thanks for joining us today. Tell us a bit about yourself?

I am married with 3 grown up children.  My high school did not have a volleyball team so I was recruited by my college basketball coach to play volleyball – I played all 4 years in college – volleyball and basketball.  I started the boys volleyball team at St. Joe’s Metuchen in 1984- we were one of 8 teams in New Jersey back then.  I left in 1989 when my daughter Shannon was born.  I was home with the kids until 1994 when I started teaching at CBA.  I coached my kids grammar school volleyball teams and started the team at CBA in 2002 and have coached up to present time. I also coached my daughter when she was at Point Beach ( 2004-2011).  I have helped out at Red Bank Regional as my freshmen coach is the head coach there.

NJP expects CBA to return to state playoffs this year and battle for top honors in the shore conference. Which teams will be your biggest competitors?

Technically – be mechanically sound so the brain doesn’t have to think about what you do on the court.

Mentally – Have a monster positive attitude on the court no matter what the score – no one should be able to look at you and know if you are losing at the time.

Tell us about your team this year? Who will be your top players?

I’m really excited to coach this team this year.  These guys have been on varsity for 2 years now.  I have a lot of talent – Colin Stevens (11) is my setter- his release time is ridiculously fast.  Jack Dooling (11) and Alex Conlon (12) as my outsides – they are smarter and stronger than they were last year .

Can you share one tip for any current high school player to improve his game?

I coached my son Neil when he was at CBA – he wasn’t allowed to call me mom- if he did he ran so the guys always tried to get him to say it.

Miguel Cabrita didn’t know what sport he wanted to play when I taught him at Joe’s (1986) so I encouraged all 5’4” of him to play volleyball  – now look at him.

I have the longest history as a woman coach at CBA.

The players I have coached over the years may not know this but they are my “favorite” player.

To conclude – my guys know I love the game and I try to instill that passion in them also.