Piotr Namiotko Reflects on His Volleyball Career in New Jersey 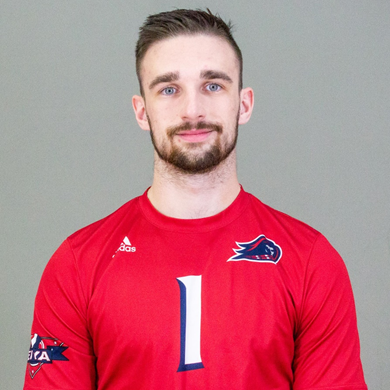 The name Piotr Namiotko is synonymous with volleyball success in the state of New Jersey. From his days in club volleyball at Warren SixPack to his time at Harrison where he lead the Blue Tide to a state championship, through his current success at NJIT, his leadership and outstanding level of play has been a hallmark.

Peter has always been a lead by example type of player. Coach Nick Landy of Harrison was effusive in his comments… “Not only was I always in awe of some of the incredible things Peter did on the court, but the most amazing thing was how each day and each year during his four years, he improved his skills to not only be an offensive power but an all-around defense player as well.” Landy added… “I have had the pleasure to coach some incredible athletes in my time as a coach of multiple sports at Harrison… he may be the best of them all.”

Piotr had been an inspiration to so many NJ youth players over the past years. He has been a pleasure to watch at NJIT and has shown that New Jersey players can have great success beyond high school. It was a privilege to have him join us… and we will be watching to see what he can accomplish at the professional level in the future.

Here is our interview with Piotr…

Tell us a bit about yourself? (What college do you attend, what town do you live (on campus/off campus)? What year are you graduating?, family?, former high school and club team?, etc…)

As many might now know I was born in the USA but lived in Poland for about 12 years and moved here in 6th grade. I live in Harrison with both my parents and my twin sister Paulina. Currently, I am attending NJIT in Newark and I am also part of their D1 volleyball team. I went to Harrison High School where I played Football, Basketball, and Volleyball. Since 8th grade I played for Warren Sixpak, and currently also work there. For some odd reason just can’t get away from that club and Fred Siegle. I am supposed to graduate this year in December but with NCAA maybe giving us 1 more year of eligibility I might be graduating in May 2021.

I have been playing volleyball since 2011 (9 years). What inspired me to take up volleyball initially is my cousin Ziggy Goryn star from Wayne Hills 98-02. Ziggy him self is a 1000 kills breaker in the state of New Jersey. He’s the one that would bring me to his adult open gyms and play against some amazing volleyball players. It for sure lit a spark inside me for the sport, and then that’s when Ziggy was the one to bring me to Fred Siegle at Warren SixPak back when they were still practicing at PowerZone.

Just watch volleyball, any kind of volleyball. Professional, National, even club. There’re so many things you can learn from just watching film or even just highlights. Another tip is don’t be afraid to try those things in practice and making it your own move or adding it to your own collection.

Tell us about your college team, how is your current season progressing, and where do you expect to finish?

My college team? Oh boy where do I start with those guys…

Sadly, the season for us was cut short. Definitely wasn’t an easy end for me and everyone else especially since this was supposed to be our best season yet. Beating a few nationally ranked teams and holding our high spot in EIVA we were on the right track to do huge things this year. But for sure we cannot put our heads down just because it was short there was a lot to learn from it and withdraw from it. But my team, I got to say they are the most hard-working people I have ever been around with. It’s just constant grind to be as good as we possibly can be. For sure it was showing throughout the season.

Just play volleyball. Being able to play a lot of this sport puts you ahead of the game especially in high school. Many kids in high school only play during season. Being able to recognize different situations in this sport and using them to your own advantage to help yourself and your team is huge, so playing a lot of volleyball for sure increases your IQ and helps you succeed more.

What is your best memory about your high school experience at Harrison?

Well of course when we swept Southern in 2 sets at Fairlawn High School snatching first place in the state rankings from my brother Liam Maxwell. Hopefully he reads this part.

What’s next for Piotr?

Well, as of right now I am graduating in December of 2020. Hopefully to go play professionally.

Have you won any awards at the college level?

Yes, I have. I was Second team all-conference for EIVA.

NJP considers you as one of the top players in the country. Do you plan on playing professionally after college?

Of course. I would love to. My personal dream and goal is to go as far as I possibly can in Volleyball and play at the highest level in the world.

I am a huge video gamer, usually play games on PC such as League of Legends, Counter Strike, Rocket League. I also stream if people are interested on Twitch: RightSyndrome

During last summer I did a jump beach workout with my own plyo box, and also worked out in the gym.

Georg Grozer, from Germany. The man is a cannon when it comes to playing the Opposite position. I get goose bumps watching such a powerful player as him, that’s who I aspire to be someday.

These guys have stuck with me throughout most of my career and were the one’s to push me forward.