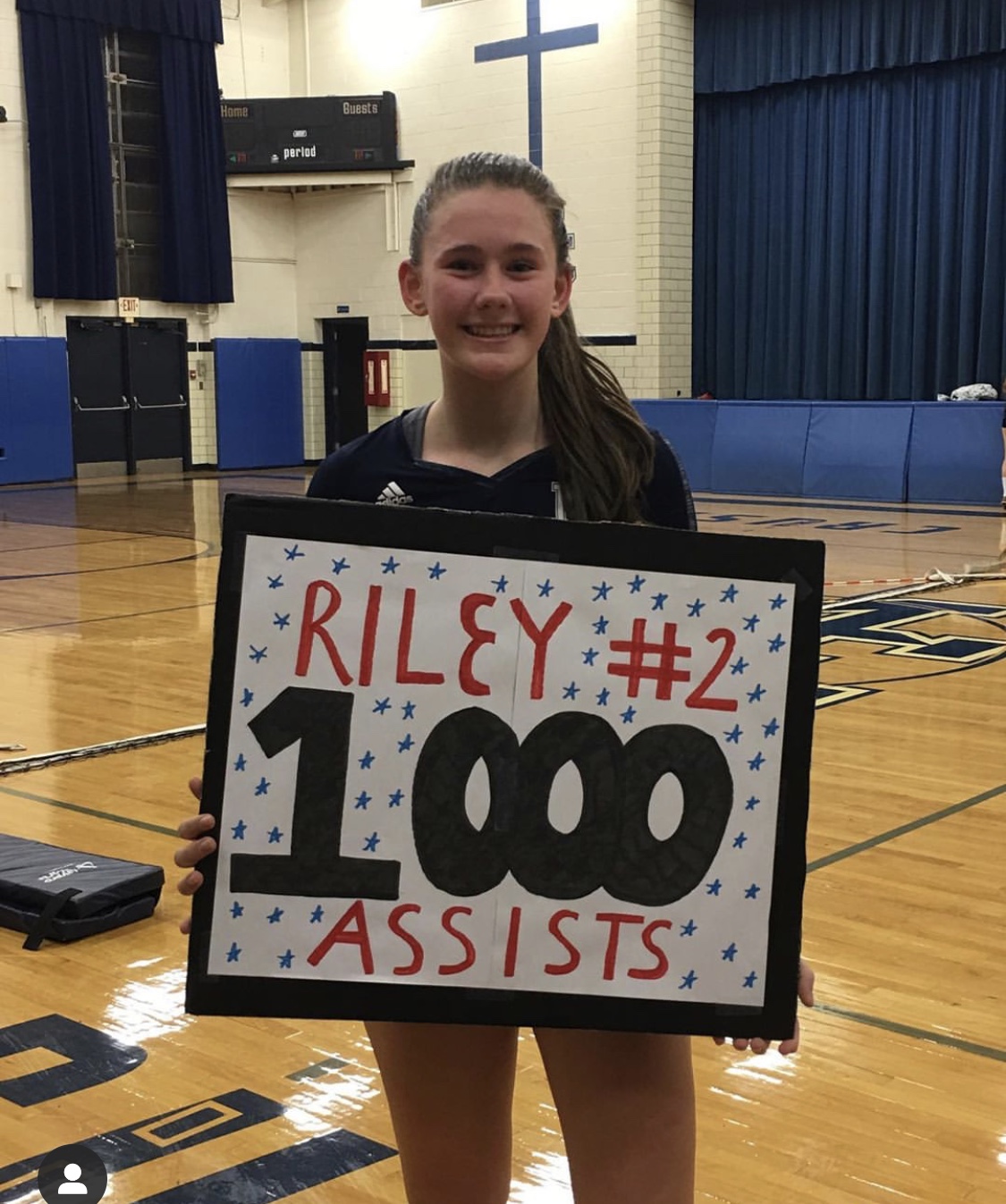 Morris Catholic appears primed for an outstanding upcoming 2020 season with 14 returning varsity players including some of the states standout players. One of those players is rising senior setter Riley O’Hagan. A four year varsity playmaker, Riley had a breakout junior season with 429 assists, 41 aces, 204 digs, 22 blocks and 83 kills.

NJP will soon launch our overall player rankings which provides a formulaic interpretation of statistical contributions for every player in NJ high school volleyball. For returning players for the 2020 season, Riley is ranked #6 overall in the state.

Riley is a brilliant quarterback for the Crusaders. She enjoys being the decision maker on the attack. On the court, she exudes passion and spirit, a jumping fire starter that keeps momentum for her teammates with fist pumps and end of point celebrations. Her setting is smooth and she is not afraid to throw in a strategic dump or spike for a point.

MC is stacked with several solid seniors returning for their last campaign. Defensively, Alicia Pokrzywa posted 468 digs in 2019 which was third in NJ last season and tops for returning players for 2020. On the attack, Elle Kretten has been an outstanding player who had 211 kills, 176 digs, and 24 aces. We expect her to be dominant offensively. Charlotte Sforza, Lauren Carlucci, and Isabelle Adeyinka are all rising seniors who will have big contributions in 2020. And rising juniors Maia McNeil, Emma Duphiney, and Alex Eckerson can all breakout this fall.

We expect the Crusaders to have a 20 win + season with the potential to create some magic in counties and states for this quality group of senior leaders.

Here is our interview with Ms. O’Hagan…

Tell us a bit about yourself Riley?

My name is Riley O’Hagan and I’m a rising senior at Morris Catholic High School in Denville, New Jersey. I live in Chester with my parents, older brother, and adorable dog. I’ll be graduating in 2021 and I’m really excited to make the most out of my senior season.

I have been playing volleyball since 7th grade, so this will be my 5th year playing. I joined my middle school’s intramural program just to have fun and as another way to stay active. As soon as I started I loved the sport so much and wanted to play as much as I could. I started going to camps and I joined a regional team. Once I got to high school I played for the school and made the GSEVC 16 Premier team. At the time it was really scary to play up with girls who already knew each other but it was ultimately a great decision because I grew immensely as a person and player. This was the most intense team I had been on and it just fueled my love for the game even more as I started to understand it on new levels.

I’m a 5’9 setter and I wouldn’t trade my position for the world. I’ve been a setter since day one and I enjoy everything about it. I get a chance to use all skills such as defense, attacking with the tip, blocking, and, of course, setting. I love getting to call the plays and control the tempo. I play at Garden State Elite and have been playing there for all three years of my club career.

How will Morris Catholic do in the upcoming season? Do you have a lot of returning players? What will be the key to success?

I am confident that this upcoming season is going to be the best one yet. My teammate, Ala Pokrzywa, and I have been on varsity for all four years of highschool and we’ve seen the team change a lot every year. Our first two years we were conference champs, but last year we fell just short, so that is definitely a goal this season. This year we have almost all of our starters returning and we only got stronger. A lot of girls played on club teams and although that season got cut short, we have all improved since last season. Most of us being seniors really gives us motivation to finish our highschool careers on the highest note possible. I’m excited to get back into the gym with my best friends and grind so that we can play at our highest level.

Last year we’ve made our farthest run into the county tournament ever and we’ll fight to go even farther this year. I think our key to success is going to be outsmarting the other teams and working harder than them. I know we are going to face a lot of great competitors and I really believe we can beat anyone if we make the right decisions and keep fighting till the last point. You don’t always have to hit the hardest or jump the highest if you’re making the right decisions at the right time. I’d like to move around the sets a lot more to throw the blockers off and give my hitters the best opportunity to outsmart the opposition’s defense.

Tell us about your teammates. Who do you expect will be this years standout and up and coming players?

Without a doubt our libero, Ala Pokrzywa, is a phenomenal standout player. She is the most reliable libero I’ve ever played with and I’ve never had to doubt her ability to pick something up. I wouldn’t be able to run an offense without her dime passes. On top of that, she’s one of my best friends and I’m lucky to share the court with a great player and person like her. Two other girls who I’m expecting to shine this year are Emma Duphiney and Ella Kretten who played at GSEVC with me this year. Emma is the class of  2022 and she’s a great DS/Lib who will be a leader for the team next year. Ella is one of the many seniors on the team and a great hitter. It has been nice to strengthen our connection during the club season and I expect it’ll transfer to the school season. Another key hitter in our offense this year is rising junior Maia McNeil who always brings power and will be a great player for Morris Catholic this year and next year.

NJP has you listed as a top 10 all-around player in their rankings of the 2021 class. Do you plan on playing in College? (If so, which ones are you looking at?)

I’m definitely still interested in playing in college but I’m just excited to see what the future holds and if it is volleyball oriented or not. Academics are my priority and it would be great to have volleyball on top of that but I’m excited for college either way.

We faced a lot of good players last year but I would say one of the toughest was the Kinnelon libero, Ashley Verma. I could probably say the entire Kinnelon team was our toughest competitor because they were just so well rounded. Every player in their lineup was strong and whenever we played them it was guaranteed to be a hard match. We also had a little bit of history with them being in the same conference and facing each other in big games so it made Ashley getting up every ball we hit her way a little more frustrating. She’s a great libero and always fun to play against because I had played with her and a few other of the Kinnelon players in my first club season at GSE.

I am extremely lucky to have such a great support group. My parents have constantly given me their full support. It’s always great talking about the games with them afterwards. I love seeing them in the stands. It was awesome to have them and a lot more family members in the stands to celebrate my 1000th assist last year. It was a great feeling. Also both my club and school teammates are amazing. They make the long practices and tournaments worth it. I can’t wait to play with and against my best friends in this upcoming season.

How are you dealing with the current world situation with COVID-19?

I would say I’m dealing with COVID-19 much like everyone else. I’ve been staying inside and staying safe. It’s been good to spend time with my family and especially my brother who has been home from college for a while. The other day GSE started practices again so it was nice to get my hands on a ball and be with my teammates.

My high school coach is Coach Meyer and it is great to play for him. This is our first year having a returning coach and I’m thrilled that it’s him. He pushes us in practice while still keeping it fun. Having him as a teacher at the school is great too because we can talk about volleyball and plan for the season. He is super funny and easy going but knows when to be serious and get down to business. He is focused on preparing us for the season and also building the team for the upcoming years.

Tell us about your Club team and Coach?

My club team is a great group of girls. This past season the majority of the girls were returning so we knew the game plan going in and what our coach wanted us to achieve. We all mesh really well and they all make me laugh like crazy. My club coach at GSEVC is Khaled El Shamy. He’s coached me since my freshman year and has seen me grow on and off the court. He has taught me so much about the sport and I wouldn’t be who I am without him. He knows and understands volleyball in a way that no other coach I’ve had does. He’s pretty much always right, but don’t tell him I said that.

I would just like to say that I’m super grateful to have been asked to do this interview. I’m very excited to have a great senior year with my team and hopefully we can pick up some titles. 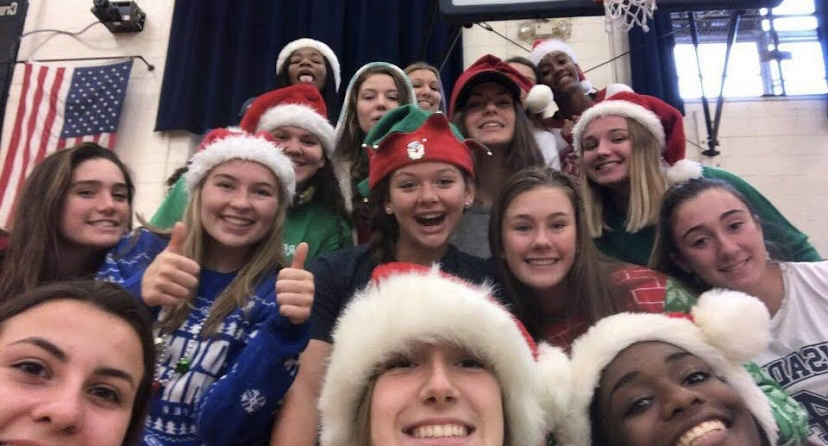