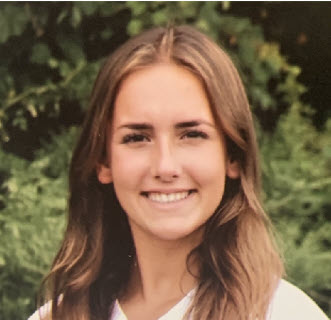 I think we are all familiar with that one player on a team who always exemplifies leadership, poise, and character. They are not only one of the best volleyball players on the team, but they bring a positive spirit that makes them special. They are surrounded by supportive family members at every game and you can tell those family members have done everything right is setting the values and foundation that they will be eternally proud of in the future. That player at Westwood High School is Liv Bereza.

She will be counted on, in her upcoming senior year, to be the leader of the Cardinal squad who finished 14-14 last season. Those leadership skills will be most important in determining the success of the 2020 team. There is a warmth that exudes from Liv. But you can tell she values hard work as the basis for her and her teams success. We expect that she will leading by example and setting the right tone for a successful season.

Westwood loses three seniors who made solid contributions in 2019. Liv lead the team in kills as a junior with 162. She will most certainly be a six rotation outside for the Cardinals joining rising senior setter Jocelyn Tortorici and senior middle Haley O’Dell. Heidi Brockner is expected to run the defense as Libero.

The Cardinals are in a tough division with Big North powers Ramsey, Pascack Hills, and Fort Lee. NJP expects Westwood to be competitive in the American Division and the Big North tourney, and make state playoffs with Liv leading the way. With a large cheering section screaming her name…

Here is our interview with Ms. Bereza…

Hi Liv…Tell us a bit about yourself?

Hi! My name is Liv Bereza and I live in Westwood New Jersey! I am a part of the class of 2021 at Westwood High school and am extremely looking forward to my senior season there! My parents are the most encouraging and benevolent people in my life. You can find them at all of my high school and club games despite them both having full time careers as a flight attendant and social healthcare worker!

I have been playing since I was 12 years old, which puts 6 years under my belt! Volleyball has always been a part of my life in some shape or form. Many people in my family played, including my grandfather, uncle, mom, cousins, and even family friends! What really started my career however, was my family friend Larissa Iwasikiw, a former IHA and DIGS club player! She introduced me to the club DIGS, and after one clinic, I was sold. Since then I have been playing volleyball!

I’m about 5 foot 9 inches. I am an all around outside hitter for highschool and club, however this past season for club I was a libero! I play for the DIGS volleyball club.  My favorite position has to be outside hitter because there is no better feeling than slamming the ball down and getting a kill!

Losing three solid seniors will be tough, but Westwood has a solid core of returning teammates. Do you think you will have the firepower to compete with division foes Ramsey and Pascack Hills in 2020?

I definitely think that Westwood volleyball will be a team to keep an eye on this year. Last year we ran tight games with the top two towns in our league, and this year, my plan is to not only have a close game, but to win.

You were an outstanding overall contributor for Westwood last season with solid stats in digs and aces, as well as 162 kills. What are your personal goals for 2020?

My personal goals are to continue working on my technique and overall skill. There is never any harm in working on the basics and my foundation, especially after a long pause on the season due to Covid.

My teammates are some of the most hardworking people I know! Each player is always willing to put out all their effort and do better for the team. We really turned the program around last year thanks to an amazing team and an amazing coaching staff! I think that this year, Jocelyn Tortorici is going to be a standout setter.

I do plan on playing in college! As of right now, my top schools are Stockton University, Johnson & Wales, and Roger Williams!

One of the toughest competitors I faced was definitely Peyton Oliver from Ramsey. She is an amazing middle hitter and playing against her both during our high school season, and in club practices only made me a better player.

Tell us about your Club Coach?

My coach this year for Club was Coach Annie DeLoid, who also coaches at Stevens Institute of Technology. This was her first year being a head coach for DIGS volleyball club, and she could not have done a better job. Coach Annie prioritizes the basics because she knows that’s what is going to make a player a better player. My serve receive during the end of the season had never been better and it was all thanks to her for taking the extra time to really coach me, and help me get better. She also was extremely helpful in getting me comfortable and familiar with the recruiting process. If it weren’t for her, I wouldn’t even have an email to a coach drafted!

My high school coach is Coach Andrew Camporale. He is one of the most dedicated coaches I have ever played under. Coach Camp put so much work into turning the Westwood volleyball program around, and we wouldn’t have been able to be a top 500 team without him. The Westwood program went from the standard everyday practices, to having open gyms, participating in a summer league, doing strength training/lifting, and even team bonding with the coaching staff. We really became a family this year, and it was all because of him.

My support group is definitely my whole family. My Mom and Dad of course are at almost every single game, cheering until their throats are dry, but my grandparents make it to some games too, and a common dinner table topic for family dinners is volleyball!

My favorite college players are definitely Lexi Sun and Kathryn Plummer. My club team actually had the amazing opportunity to have a zoom call with Kathryn Plummer during quarantine! She shared with us so many helpful tips and tactics she uses to be the amazing player she is. Lexi Sun is one of my favorites because she is just so fun to watch. It’s never a dull moment watching her take a swing at the ball!