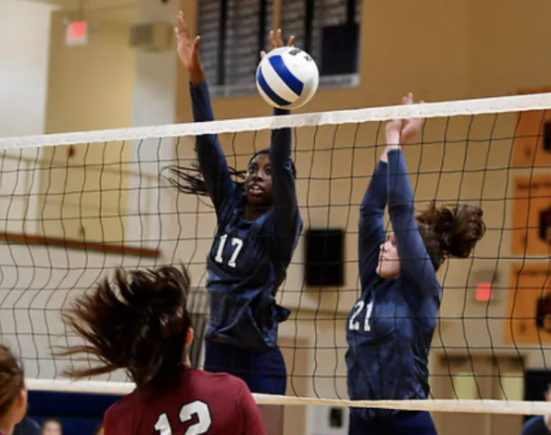 What an amazing initial year for Brookelyn Talmadge, a freshman at Immaculate Heart in 2019, who was voted first team All-Conference in addition to her team winning a NJ State Championship. The question emerges as to “Where does she go from here?” For us, the answer is quite clear. Like many student athletes that perform at a high level, Brookelyn’s focus is on academics as a number one priority. But on the court, Brookelyn will have some big shoes to fill with All-World Player of the Year Anna Morris now graduated and moving on to Northwestern. But her path is clear and on track for a similar impact as Anna.

Brookelyn’s inspiration comes from her older sister Bryana who graduated from DePaul Catholic in June. Being a part of a close-knit and supportive family is clearly a part of her success thus far as well. But Bryana, who is a much different type of player than Brookelyn, has been the biggest influence. Bryana at 5’6″ is much more of a defensive player as an outside where 6’0″ Brookelyn spends most of her time at the net at middle and is a monster on the attack and the block. We can only imagine the intensity of the backyard pepper games at their Clifton home, but what an amazing experience for Brookelyn to have Bryana as a role model and a mentor. And it shows.

As usual, Immaculate Heart will have a large amount of seniors lost to graduation, with some of the best featured players in the state being part of the year-end farewells. The replenishment of talent at IHA has been a standard for more than a decade as they look to extend their streak of Sectional Championships to 14 years in a row. This streak is truly remarkable. The UCLA Bruins men’s basketball team won 7 consecutive titles under John Wooden. Even the Chicago Bulls, New York Yankees, New York Islanders and Montreal Canadians only mustered 3-5 consecutive titles in a row at best. It shows the depth of what Coach Maria Nolan has accomplished over her tenure at the school.

For this upcoming season, we expect IHA to again be at the top and they remain the NJP pre-season #1 ranked team in New Jersey. Brookelyn will be a major part of the team and we expect her volume of hits and blocks to increase substantially. We expect Olivia Coughlin to anchor the setting role with Gianna Grigaliunas leading the defense. Alyssa Lowther should settle into the #1 outside role and there are a host of up and coming talent that will compete with the remaining returning varsity players from last years squad. We count 10 top level club players at their age groups who will have a chance to replenish and exceed.

As you watch Brookelyn play, it’s apparent that she is a special talent. Her movement flows effortlessly and her volleyball instincts are spot on. She possesses athletic arms with an impressive wingspan, and can swing with power and skill as well as block with like a pro. The best is yet to come for this new Blue Eagle dominant force.

Here is our interview with Ms. Talmadge…

Tell us a bit about yourself, Brookelyn?

Hi! I’m Brookelyn Talmadge and I will be entering my sophomore year at Immaculate Heart Academy this fall. I live in Clifton, NJ and I will be graduating in the year 2023. I live with my family; father, mother, and older sister.  My sister, will be attending the University of North Carolina at Wilmington in the fall. When I’m not playing or practicing volleyball – I enjoy cooking for my family and baking.

I started playing volleyball when I was 8 years old at a local town team – the Avengers. At that time, I wasn’t the correct age to play for the team but I was taller than most kids my age.  My sister was already playing for the varsity team, so they took a chance with me on the team. When I started playing I was really intimidated by the older kids that were playing but after a while, I got more confident and eventually fell in love with the sport.

I am 6 ft tall with a vertical of 9’6″. I play middle at Immaculate Heart and at Side-Out Sports Volleyball Club. My favorite position to play is middle but I also enjoy playing outside.

Will your Immaculate high school team keep the winning streak going for the 14th year in a row for the upcoming season? Do you have a lot of returning players? What will be the key to success?

I really hope that we will continue to win, but I know that in order to win we have to put in some hard work. Sadly, we are losing more than half of our starting lineup but I think that our team will rise to the occasion. Our key to success this season will be to work hard and play as a team.

Tell us about your IHA teammates. Who do you expect will be this year’s standout and up and coming players?

Coming to IHA was difficult for me but the girls made me feel so welcomed on and off the court. They embraced me as a member of the team and I was excited about playing. Our team is like one big family. We always support each other and trust each other. I think that all of the girls have worked hard and I’m excited to see the way the season will progress.

Currently, my sole focus in being a high school sophomore.  I want to continue to focus on my academics.  In the future, I would love to play in college but right now I am focused on my academics and my upcoming season.

This is a tough question. There were so many talented players and more importantly teams that we faced last season. Its almost impossible for me to single out just one.

You were arguably one of the best freshmen at the NJ high school level for 2019 with 150 kills and 46 blocks. What are your personal goals for 2020?

I really want to improve defensively and make it to the finals with my teammates.

Tell us how your sister Bryana influenced your passion for volleyball.

My sister is the sole reason I started playing volleyball. As a player, my sister was always underestimated on the court. Underestimating her ability is like a personal challenge to her that she eagerly welcomes.  Bryana is so passionate about the sport, she always exceeds expectations at every occasion. My sister has taught me perseverance and passion for the game.

Tell us about your high school coach Maria Nolan?

Coach Nolan is a legend in the coaching community and I am very lucky to be playing under her guidance. Coach Nolan has already taught me so much about the game of volleyball and continues to inspire me to be the best player I can be.

My support group is definitely my family. My mother is always nervous about me playing volleyball. She is at the edge of her seat even if I’m just serving. My older sister is my biggest critique/ coach, she’s always telling me any mistakes I made in great detail. When I was in elementary school, she would literally write down my mistakes and would tell me how I could’ve done better. Now she just casually mentions what I need to work on and what I did well.  This always entertains my parents. My biggest supporter/ fan is my Dad. My father is at every single game, practice, or scrimmage (no matter how small).  He arrives an hour early just to help cheer me on.

We are thankful that we are all healthy. We are extremely cautious about our interactions (my mom is the COVID police).  My family and I have been trying to stay active during these difficult times. As a family, we go on walks around the neighborhood or to the park. I was worried about our volleyball season, but as of right now it is only delayed.  Think this season will be challenging as we will need to adapt to the new COVID world but it will be nothing our team can’t face.

Did you win any awards such as a freshman or prior to entering high school?

Last season, I was First team All-Conference, Second Team All-County, and Third team All-State Non-Public. These awards were exciting to me as my sole focus last season was adjusting to being in high school.

I love cooking and baking. It’s therapeutic for me. I love finding new recipes and trying them with my family.