Owl’s Sandra Starcevic is a Dominant Force at the Net 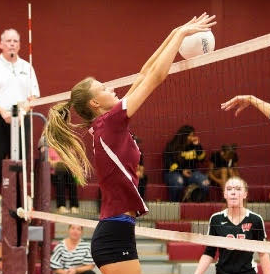 Highland Park had a star emerge last season at middle. Sandra Starcevic had a break out year as a junior, putting up 117 blocks for the Owls which was good enough for second in the state. She averaged 2.49 blocks per set which was best in the state. Sandra lead Highland Park in blocks, kills, and aces in 2019.

At 6’1″, she is an absolute force at the net. And she knows it. She has learned her position quickly and has mastered it over a two year period. She exudes confidence and enjoys the opportunity to turn back opponents attacks. She is extremely athletic, has a perfect body type for middle, and will only get stronger as she continues to gain experience.

Highland finished at 12-8 last season and returns all of their varsity starters. They are currently projected at #2 in the GMAC Blue and 7th in the GMC overall and also earned a top 100 rating in the field of over 300 high school volleyball programs in NJ.

Knowing how quickly Sandra has emerged as a top player, the sky is the limit as far as expectations for this season and in her college career. She will shooting for the stars…

Here is our interview with Ms. Starcevic…

Tell us a bit about yourself, Sandra?

My name is Sandra Starcevic and I’m an incoming senior at Highland Park high school. My graduating year is 2021 and I have played varsity for 2 years. In my family, I have a older sister, a younger brother, my Mom, my Dad, and my dog.

I only started playing volleyball my freshman year of high school. I played JV and varsity my first year. Then my sophomore year, our team needed a middle and I played that position while learning the game. I became very good, very fast. I was playing with all club players. Whenever I was in a game, the coaches and refs told me that I need to keep playing because I was very good and they thought that I was playing club already but I wasn’t. My junior year, I started playing even better. I would always get so many blocks and hits in a game the crowd would scream. That’s when I decided I should take volleyball more seriously and try in college because I loved playing and everyone told me I should. People also couldn’t believe I got so good so fast without ever playing club and playing only 2 years of varsity. I was always good at sports whatever I played. I always made varsity and started. I learn very fast and I’m very coachable. Every team I played against, their coach’s would come up to me and always tell me that I’m very athletic and a very good player and that I need to continue.

My height is 6’1. I can jump 9 ft and I can hit over a men’s net. I play middle and it’s my favorite position. Middle is my favorite because I like to hit at the net and I don’t always have to pass. But, I also like outside. I never played outside during a game but after practice I would hit from there to see what it’s like and I got good at that quickly.

How will your Highland Park high school team do in the upcoming season? Do you have a lot of returning players? What will be the key to success?

We have a lot of returning players and I think we will play well this year because we have the same team from last year and we’ve learned a lot. We were missing a setter last year so we had to put one of our outside players in to set who has never set before. She played very well. Of course, not all sets were perfect which is why this past season we didn’t get a lot of hits in. With whomever jumps in to play as setter this season and the rest of us playing our usual positions, we can win as long as we work hard and play hard.

Tell us about your HP teammates. Who do you expect will be this year’s standout and up and coming players?

It’s hard to pick one that I think one will stand out so I’m going to say Mariana Rojas and Sophia Polos. I picked Mariana because she’s a very hard working player. She’s one of our captains and she plays very well. She helps everyone who needs it on the team and she gives it her all every game. I also picked Sophia because she was one of the players who was a setter for a while and she did really good for her first time. She is also one of our captains and is a very hard worker when she volunteered to set for us when we needed someone.

I do hope to play in college because I love the sport and I became a great player in a year. I know I can be really good because of how fast I learn and how athletic I am. I was looking at D1 colleges in NJ because I want to be closer to home but if there was a college further out, I will also consider them. Some of the schools I would want to play at are Rutgers, Seton Hall, and Rider University. I was looking at these because they are D1 teams and they have majors I’m looking at.

I didn’t have really tough competitors last season like I thought I would. Every time I got ready to play them I blocked every one of their hits against me so they stopped hitting when I was there. But I will say during my sophomore season, one of our last games we played Verona. They had a good team but they had a really good middle, Hunter Coppola, who was a senior and was going to play at University of Texas upon graduating. I remember getting ready to go up against her and she played very well, but I started keeping up quickly. She hit 1 balls really well so I tried them as well and it worked. They couldn’t pass my hits. Hunter was the toughest competitor for me.

You lead all returning players in blocks last season with 117… what are your personal goals for 2020?

I was able to get a lot of blocks last season. I am planning to do it again and go for even more if players aren’t scared to hit against me. Because my season isn’t as long as club season and I still got that many blocks, I know I can do it again.

My varsity high school coach, Tom Sclafani, is one of the best coaches I ever had. He taught me a lot and has always supported me and the team. He was once a college coach for women’s basketball at Steven’s Institute of Technology and he always wanted me to go to college for volleyball because he knows I can do it. So when I told him I want to play college volleyball he was very excited and started looking into it. But he didn’t just help me, he helped my teammates with college and many other athletes he coached before. Our JV coach, John Lee, was also helpful to me and taught me on how to be a better middle.

My Mom is definitely one of my best supporters because she comes to every game and is there to cheer me on. My brother also comes to my games and we talk about how I played and what I can do better. His name is Danny, he’s a sophomore this year, and he’s also very athletic. He plays football and he’s huge. Every coach loves him and he’s definitely going to college for football.

We’re staying safe and also getting work done. My parents are working hard while me and my brother are staying in shape for our seasons by working out on the turf and practicing each other’s sports together. I also began practicing with my team on the field. My older sister already goes to Rutgers, but she doesn’t play any sports. She’s getting her school work done and going to work every day. If we go to school this fall, our season will be different then usual. We won’t be able to practice with each other until September, and we will start our season in October. So as long as we keep in shape and practice in September, we will be ready for the season.

Our schools biggest rival is Mother Seton. Every time we play them, we get so close to winning but haven’t yet. They’re a very good team and we really want to beat them.

Even though I love volleyball and play it a lot, I also like doing other fun things like going to beaches, pools, and hanging around family.