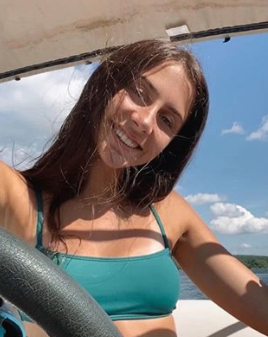 Sloane Rooney of the Phillipsburg Stateliners has emerged as one of NJ’s top rising high school volleyball juniors. She has made a substantial impact on her high school team as well as her Club travel squad at East Coast Power in Pennsylvania. The awards and honors keep rolling in the past two years and college recruiters are starting to take notice.

Sloane’s accomplishments go far beyond the court as she is currently a 4.0 GPA honor student and also is a T3 Elite lacrosse player. On the court, she has been on the PrepVolleyball 2022 watch list, was voted PrepVolleyball All-American Special Mention, and part of the NJ.com 80 best underclassman list last year. She made the first team all-conference high school list as a sophomore and also named to the Lehigh Valley All-Area Team as a honorable mention.

After setting as a freshman, she made the move to 6 rotation outside hitter as a sophomore and tallied 108 kills, 163 digs, 35 aces, and 21 blocks. She lead the team in aces and had a 98% serve percentage. The Stateliners had a rough transition to their girls volleyball program as most new programs do in their first few years, but since Sloane joined as a freshman, they have made state playoff both seasons with winning records.

It’s very clear that the 5’10” Rooney can’t wait to get back on the court. She has high level drive and determination that makes downtime with COVID that much harder. She uses a high level of game smarts and instincts coupled with speed and athleticism to drive her success. Her final two seasons should be fun to watch as she continues to mature into a Captain and leader.

Here is our interview with Ms. Rooney…

Tell us a bit about yourself, Sloane?

My name is Sloane Rooney. I’m a rising junior at Phillipsburg High School, and I live in Bloomsbury, NJ with my Mom, Dad, and 13-year-old sister Brooke. I’m in the class of 2022, and I play varsity lacrosse on top of high school and club volleyball.

I started with a developmental program at 12, but my first real year of club was 13s (7th grade) at East Coast Power. My Mom and both of her sisters had the chance to play volleyball at the collegiate level so I have been hearing all about it for as long as I can remember. My Mom and I started at home and it came pretty easy to me, she signed me up for a volleyball program, and from there I just fell in love with the sport. Before volleyball, I was set on being a soccer player, which kept me in great shape, another reason I chose to be a setter. I liked the organized chaos of chasing after the ball and finding something good to make out of it.

I’m a 5’10, six rotation player, with a 9’7” approach, so my vertical is about 27”. I play club for East Coast Power-16 Carolina and I am a six rotation player for their national team. We run a 6:2 where I set out of the back row and hit right side from the front. In high school, I was the starting varsity setter my freshman year. During my sophomore year, my coach had different needs.  I was a six rotation outside hitter. My favorite position is easily setter. Not only do I get to touch the ball every point, I’m able to run different plays and control the pace of the game. I like the responsibility of playing every second ball because you always know your play can change the whole point and you’re always in a position to help your teammates. Volleyball is such a team effort, I feel like the setter is a key component in a team’s cohesiveness.

How will your Phillipsburg high school team do in the upcoming season? Do you have a lot of returning players? What will be the key to success?

I am pretty optimistic for the upcoming season and am really hoping we actually have one, given the Covid-19 changes. We only have three returning varsity players, which of course is a challenge. We are a relatively new program and there are a very limited number of girls who play club volleyball, it’s hard to pinpoint exactly what we will need to have our best season. However, we have athletic girls, who get along well on and off the court, so I think team dynamic and setter-hitter connections will be a big aspect for our team and our success as we move up into the Delaware division.

Tell us about your Stateliner teammates. Who do you expect will be this year’s standout and up and coming players?

Since we lost the majority of our varsity team, it will be interesting to see the new team dynamic and players who step up this year. Our team is newer and I love that we all get the chance to build this program. Phillipsburg is all about tradition – and were starting ours from the ground up. I’m happy to contribute wherever I am asked, but would love to get back to setting this season. I think my ability to put up a hittable ball from mostly anywhere on the court could be a huge advantage for us, but time will tell. I’m looking forward to having Senior Azuri Abraham back in the middle because she is tall, athletic, able to run various plays, and puts up a WALL of a block. I also am excited to see Monet Gonda on the court more this year. Her natural ability is impressive and she’s super athletic so I can’t wait to see what she will accomplish this season.

I love this sport and I’d love to play as long as possible. My biggest goal is to play volleyball at DI in a high academic university, but I am interested in several D3’s that fit that requirement too. I have a 4.0+ GPA and class rank of 13 / 405, but our SAT exams were postponed until fall. The pandemic made for a weird recruiting year too. Our club season ended mid March and summer prospect camps were cancelled.  I did have a great experience at Wake Forest and Johns Hopkins camps last summer and I had the chance to visit college campuses down south. I have been exchanging emails with a bunch of coaches and I’ve been talking with schools since the June 15th date, but I’m not near committing just yet. There’s still a whole year ahead for that development, and academics.

Every team we face has at least a few great competitors, but one player who stands out is Jenna Deegan, during the Phillipsburg Easton non-conference, rivalry game. Jenna is a rising senior and ECP 17’s National team player. I know her from club. We scrimmage the 17’s team often, so I know how quick she can be on the net. My team wasn’t used to that so it was a bit of a challenge.

You had tremendous overall play last season as a sophomore with 103 kills, 169 digs and a team leading 34 aces. What are your personal goals for 2020?

That’s a tough question because I’m not sure if my coach will have me in a setter role, setter/right side  or the outside hitter spot.  I love that the high school team gives me the chance to develop in different positions. It helps me become a well-rounded, six rotation, versatile player – but it does create havoc for my stats. If I remain a hitter / defensive specialist for the 2020 season, I’d like to look at my metrics by efficiency, not just numbers alone. I’d like a hitting percentage of .300+ and a Kill % over .400.  My serving is extremely consistent, and I’ve been working on some things in the off-season that will hopefully increase my ace percentage this year. Of course I’d like to exceed the numbers from last season but my focus will be on playing an aggressive, smart, clean game – especially since the team is moving up in division this season. If I’m the setter, I want to make good connections and communications with all my hitters to maximize their effectiveness. I want to be able to put up a solid block, I also hope to take advantage of free balls, run new plays, and speed up the offense to keep the other team on their toes.

I usually play lacrosse in the off-season, both club and varsity, which keeps me in great shape and helps my endurance, lateral speed and agility. I’m a midfielder, a position that keeps me moving on both the offense and defensive side of the ball. Obviously I play club volleyball on top of high school and I play beach and grass volleyball in the summer.

My family. NO doubt. They drive and fly and spend countless hours in gyms, convention centers, at tournaments, in hotels, in different cities across the country. My sister, who plays ECP 13U has patiently been watching my volleyball forever. I can’t wait to play with her in high school next year. I am also very lucky to have phenomenal coaches who always know just how and when to push to get the best out of me.

My favorite volleyball story happened last year at nationals in Indianapolis. We were playing 6pack late at night and after a close game we lost the first set. In the second set, we were down 23-24 and came back and won 26-24. Then in the third set we were down 8-14 and pulled off a 16-14 win. It was our best team moment and we needed a 110% effort out of all the girls and everyone pulled through for it. Everyone thought it was over for us, but none of us got down or gave up, I thought it said a lot about the heart of my teammates.

My favorite college/pro player has to be Ronika Stone. Obviously, she is phenomenal and so exciting to watch. She is such a hard worker and clearly it paid off. On top of that, the way she holds herself on and off the court is admirable.