Owl’s Kate Rutowski on Top of Her Game 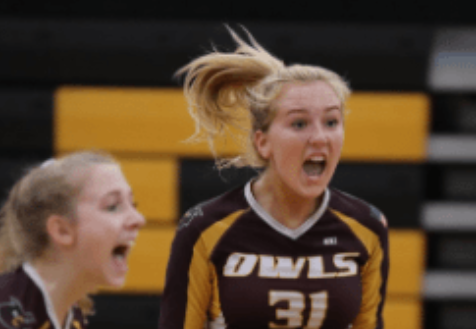 Kate Rutowski had a breakout year for Park Ridge as a sophomore and she can’t wait for the 2020 season to start. The Owls lose very little statistical impact to graduation and will be returning a large percentage of output for the upcoming campaign. NJP projects Park Ridge as a top 50 team in the state. The challenge they face in the NJIC Patriot Division is that they have the projected #2 and #4 teams in New Jersey in their division. Bogota, last year’s Sectional Champs and Midland Park, a top 20 team last season that we expect to be even better for 2020 will bring competition at the highest level.

The Owls will be stacked with top line talent as well. Kate is expected to be a 6 rotation outside hitter. She put up amazing numbers as a sophomore last season tallying a team leading 159 kills along with 101 digs and 40 aces. Middle Madison Szabo will be a senior and is a force at the net. She was near the top in the state in blocks with 77 as a junior while adding 146 kills on the attack. Kailey Levinson quarterbacks the Owls as setter and is coming off an excellent campaign where she posted 426 assists, 50 aces, and 180 digs. The back row has a world of talent as well with rising seniors Kelsey Urmanowicz (339 digs) and Charlotte Nunberg (114 digs) as well as junior Gianna Viscovic (50 aces, 210 digs).

Rutowski brings a ton of skill to the table. She has an athletic frame and a swing that is smooth and powerful. She is a feared weapon by opponents and makes her teammates better by her presence on the court. Her passion and energy level raises spirits after every point. Now as an upperclassman, we look forward to her continued development of leadership skills as she paves the way for a Captain role before graduating.

Kate played club at DIGS last season on the 16-1 National squad, representing one of the top teams at that age level in NJ. She is preparing for the upcoming club season and will in all probability be moving up to 17-1 National. This level of competition, both at High School, and at Club, will position her well for her senior year farewell as well as her entry into the collegiate ranks.

Here is our interview with Ms. Rutowski…

Tell us a bit about yourself, Kate?

Officially, I began playing volleyball in the 7th grade.In middle school, I played Basketball and did Cheer. When I got to high school I came to the decision that I would focus on volleyball as my only sport. I began playing volleyball 10 months a year.  From the time I could walk my aunt encouraged me to play volleyball.  She was a division 1 full scholarship athlete in the 90’s.  She played as a Right Side/Opposite  hitter for Fordham University.  She saw something in me when I was really little and knew I would be a great volleyball player.

I am 5’11. My vertical is 9’7 inches. For my high school team, I am a six rotational outside hitter. For Digs, I play both Outside/Opposite hitter. I will occasionally play back row as well. It is hard to choose what position I prefer more. Being able to play both has made me a more versatile player. Both positions have different mechanics that play off of each other. For someone as tall as myself I have been told that I am very flexible. Being able to get down low and fast to dig a ball is a huge advantage in a defensive player. Since I am tall and have a high vertical,   I have an advantage of taking a successful swing from the back row. Overall I love playing all the positions I am given a chance to play in!

How will your Park Ridge high school team do in the upcoming season? Do you have a lot of returning players?

I feel my Park Ridge team will do very well this upcoming season.Last season, we made it to the third round in the state playoffs which is the semi final. Unfortunately we lost but I am really proud of how far we came. This season, we lost only one starting senior so this year we have 5 returning starters. Our team has grown a lot and I am excited to see what myself and my other teammates will accomplish this upcoming season.

In my eyes, the key to success is hard work all around from everyone.  The team needs to feel united or else we can’t be successful.  We all need to have grit.  The team’s success is not based on one or two players but the entire team.  Maintaining a positive attitude will help us reach our end goal!

Tell us about your Owls teammates. Who do you expect will be this year’s standout and up and coming players?

Since we only lost one starter last year, I have very high expectations for where this season will take us. We have three starting seniors who will be returning. Our libero Kelsey Urmanowiciz makes every effort to receive each and every ball that comes her way. Our Right Side/ Defensive Specialist Charlotte Nunberg is very consistent to where she places the ball on the court. One of our Middles, Madison Szabo is one of our top scorers. She has a strong swing, and a dominant vertical when she blocks. Fellow junior Kailey Levinson, is not only a consistent setter but has an amazing serve as well. Another fellow junior Gianna Viscovic has a tremendous serve and great agility as a defensive player. I’m very excited to be playing with this group of girls again!

My end goal is to play at the collegiate level. It has been something I dreamed of since I picked up volleyball as my sport. My college choice will be determined by reaching my highest academic achievement while playing volleyball. This summer, I was planning to attend numerous college camps but due to COVID-19 my plans were cancelled. I am working with Sports Recruit a college recruiting website to hopefully reach out to as many colleges as I can.

Tell us about your club experience at Digs?

I love Digs! My experience these last two years has been unforgettable.  The friendships I have made with my teammates is everlasting. I have grown tremendously as a player and teammate on and off the court.  My coaches have taught me to play in practice as hard as I would in a game.  They also taught me the importance of having self discipline and taking ownership.  I have developed a further willingness to take criticism in order to improve my game.  One of the main takeaways from my club experience is that I must trust the process. Unfortunately, due to COVID-19 the season got cut short last year.  I hope when this club season starts we will be able to be back to the great team we were when we left off last March.

You had tremendous overall play last season as a sophomore with 159 kills, 101 digs and a team leading 40 aces. What are your personal goals for 2020?

My personal goal for this upcoming season is to be a team leader.  I will give every practice and game my entire effort.  I will remain positive and focused.  I want to increase my vertical and become a stronger player all around.  As far as my stats, I want to double my performance this year.

What do you do during the off-season to stay in shape and prepare for next year? Do you play other sports? (if so, which ones?)

Since my club volleyball season starts 3 weeks after my high school season ends, I don’t really have an off season. My club season finishes in late May. So I guess my off-season is only June and July.  During those 2 months, I continue strength training and cardio.I also play beach volleyball with my friends to stay in shape for preseason that begins in August.

My biggest support group would definitely be my family. Without them I don’t think I would have made it this far in my volleyball career. My mom and dad come to all my games to cheer and support me. They also constantly drive me to practices and tournaments that are sometimes up to five or six hours away. My dad prepares my snacks for every tournament and makes sure I arrive with plenty of time to spare. My parents motivate me to stay positive and be the best “Kate” I can be. When my Mom-mom (Grandma) is able to get the chance to come watch me play, everyone in the stands knows she’s cheering for me. She is one of my biggest supporters.

In my free time I like to spend time with my friends and family. I really love when my family gets to go on vacations, I love to experience new places and see new things. In the summer, I stay at my shore house where I go to the beach every day. I really enjoy playing beach volleyball with my friends. My shore house can get very hectic with my parents, triplet siblings, aunts, uncle, cousins, my grandmother, and our four family dogs but I wouldn’t want it any other way!

My high school coach, Bill Allen, has helped me learn to be a more resilient  player. I am really hard on myself. He helped me develop strategies to bounce back quickly and move on. At Digs, my club team, the director, Bill Lee, has made a huge impact on my volleyball career.  He has helped me develop my game on and off the court. He pushes me to be my best self. My Digs coach last season, Heather Stout, has also made a huge impact on me as well. She pushed me to limits I didn’t even know I could reach.  I am forever grateful to have been given the chance to work with her.