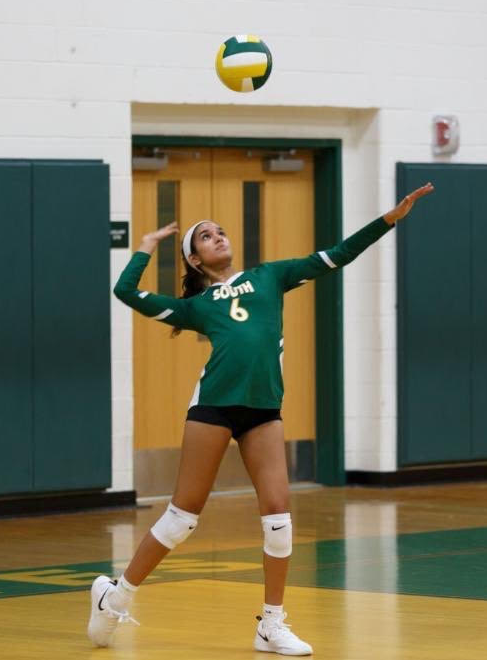 So what is so unique about the West Windsor Plainsboro South Pirates volleyball team for this upcoming season? Well, the biggest thing from NJP’s perspective is that they did not have one senior on the squad last season. This is a team that went 16-7 last year. They will be a solid group and have one of the highest rating differentials from last year to this year. This has dropped the Pirates into the top 35 in New Jersey in NJP’s pre-season ranking and they are the highest rated team in the BCSL. The quarterback of this team at setter is Varsha Gollarhalli.

Vasha is the master of strategy for WWPS. She uses her instincts to orchestrate the offense and she has plenty of firepower at WWPS to gain an advantage. She makes her teammates better, plain and simple. Varsha is a strong communicator and a quick decision maker, making the most of her and her teams opportunities for points on the attack.

Gollarhalli has three solid options on the attack. Outside Sibana Gonzalez was one of the top freshman last year putting up an amazing kill count approaching 300 for the season. Alisa Vukovic is entering her senior year and is a pure talent on both attack and defense. Rising Junior Opposite Hitter Skylar Hendrick is the third leg of this offensive tripod and provides an amazing option for Varsha as she reads the block. The Pirates have the tools to score at will and it will be tough for opponents to keep up.

It would be a wonderful way to culminate her high school career if Varsha and company could bring everything together, win the BCSL, and make an impact on a COVID modified state playoff.

Here is our interview with Ms. Gollarhalli…

Tell us a bit about yourself, Varsha?

I am currently a senior at West Windsor-Plainsboro High School South and a part of the class of 2021. I live in West Windsor with my parents, my older sister, and my dog named Millie.

I started playing volleyball when I was 12 years old. I first got interested in the sport when I watched my older sister play volleyball in high school. She joined her freshman year and I would go and watch her high school games, where I would soon be playing 3 years down the line. Going to those games was really the first time I was introduced to the sport and I fell in love with it immediately.

I am a 5’7’’ setter and have previously played for Princeton Volleyball Club for 5 years (ages 12-16). When I first started out playing volleyball, I played as an outside hitter, but I quickly realized that setting was truly the position I loved to play. I love the mentality and tactical thinking that comes along with being a setter. I have set for most of my volleyball career and occasionally played right- side hitter for both my school team and former club team.

How will your South high school team do in the upcoming season? Do you have a lot of returning players? What will be the key to success?

I believe that South will be extremely successful in the upcoming season. We have our entire Varsity team returning this year and I think that added familiarity between players will definitely be advantageous to us. We were very successful last season and I think that makes us hungrier to be even better in the upcoming season. I believe that the key to our success will be the mutual trust and collaboration between the girls. We already have established a bond with one another from playing together last year, thus our communication and teamwork should be even better this season.

Tell us about your Pirates teammates. Who do you expect will be this year’s standout and up and coming players?

We have an amazing line of hitters composed of Sophomore outside hitter Sibana Gonzalez, Senior outside hitter Alisa Vukovic, and Junior right-side hitter Skylar Hendrick. These girls are powerful attackers and can always put down the ball, no matter the set. Additionally, we have an awesome libero, Junior Shakthi Sreenivas, who has incredible ball control and really helps us on the defensive end.

I have always loved playing volleyball and it would be great to be able to continue playing at a higher level while still partaking in an academic environment that is challenging and rigorous, so I have been looking at some D3 schools.

You have made a huge impact on your WWPS High School team as a junior switching to setter and putting up over 500 assists. What are your personal goals for 2021?

I was able to achieve over 500 assists last year in one season, so it would be a goal of mine to reach 1,000 assists by the end of this season. It would be the perfect end to my high school volleyball career.

I used to run cross country and track in middle school, so during the offseason I like to go on runs to stay in shape. Running has always helped me clear my head and is a hobby I truly enjoy. I am very happy that, although I stopped running on the competitive level, I continue to run in my leisure.

I would say that former Senior and right-side hitter Gillian Hauschild from Princeton High School was definitely the toughest competitor we faced last season. We have always been rivals with Princeton and everytime we play she always gives us a tough fight. She is an amazing hitter and it is always an honor to play against a player who helps to elevate your game.

Both my dad and my sister have been working from home during the Pandemic and I have started taking a mix of virtual and in-person classes at my high school. As of now, my school district has cancelled all fall sports, but with the news of the high school volleyball season moving to March, I am hopeful that we will get a chance to play.

Last season I was a part of the Burlington County Scholastic League All Star Team and I also was awarded the Sportsmanship Award from my high school. Additionally I was named in the top 80 Junior athletes by NJ.com.

Erin Lester and Nnenna Ibe were two of the most impactful coaches and mentors I have ever had. They were my club coaches when I was 15 and played for Princeton Volleyball Club. When I was younger I used to get extremely nervous to play volleyball. With a role, such as a setter, I was so scared of making mistakes that would upset my hitters. I felt like any mistake I made would cost my team the game. These two women helped me instill a confidence in myself that I carry with me in anything and everything I do. From that moment onwards, I learned to not let the pressure get in my head and prohibit me from playing at my best. I am forever grateful for the lessons and values they taught me as both a player and a person.

In the big NJ HS volleyball game today... CBA defeats Southern in straight sets... the Colts beat the Rams. Congrats to CBA on their biggest win of the year... https://www.instagram.com/p/COtyYedMK77/?igshid=1ceoa4ag9xzda

We know... the anticipation can be brutal. But there is a new NJP boys ranking, player rater, sectional analysis, boys blog, and Predictor out this morning... at http://njpowerranking.com https://www.instagram.com/p/COsh1_0iq1V/?igshid=dc293lsiyq4d

The Predictor Picks are in for tomorrow... I know it’s late but don’t look so excited. Who will win the Southern/CBA matchup? http://njpowerranking.com https://www.instagram.com/p/COrVumWCltr/?igshid=j4i6iqtjdhr0

Something has happened for the first time in NJP’s history... Check out the new Boys HS volleyball rankings for 5/9 at http://njpowerranking.com https://www.instagram.com/p/COrMhC6sH_B/?igshid=2z8xm1w7ect

Happy Mother’s Day to all our favorite volleyball Moms in NJ. Your passion and love is an inspiration. https://www.instagram.com/p/COqd7sHMKbc/?igshid=1t3ofiruy3ft9