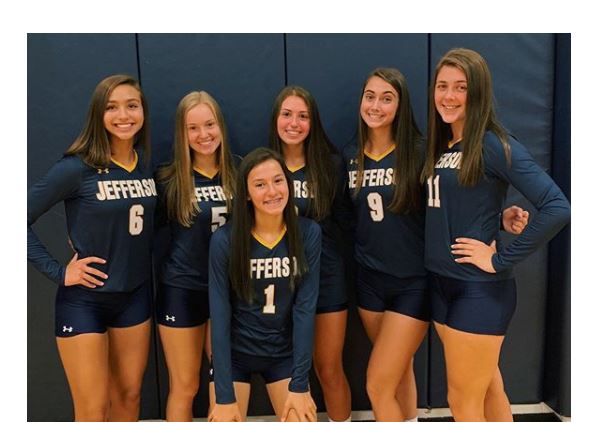 Emily Carcich had a breakout year in 2019 during her sophomore year at Jefferson High School. She quarterbacked the Falcons to a solid 19-8 record as well as posting over 500 assists on the season. It’s not a suprise to most around her as she has been playing volleyball for much longer than the average high school player. She was introduced at a very young age coming from a family of volleyball influencers, including her Dad, Jason Carcich, the Head Volleyball Coach at both Boys and Girls Volleyball at Wayne Valley.

Emily likes to be the one to strategize and make quick decisions to advance her teams chances. And she is the perfect candidate for the role possessing solid volleyball instincts and the calmness and confidence that makes her teammates feel as if they can accomplish anything.

Her pedigree is also evident in her club play at Allegro volleyball club, combining forces with some of the best girl players in North Jersey at her 17 National level team last year. The continued journey adds to an impressive resume of experience that will serve her well when college recruiters start knocking on her door looking for Class of 2026 candidates.

Despite losing 8 seniors to graduation, we expect that Jefferson will have a very succesful season in the COVID shortened 2021 schedule. As you will tell from her words below, there is an excitment about playing in the Spring and of course an overall enthusiasm to get back on the court and play the game that has been such a big part of her entire life. We wish her well.

Here is our interview with Ms. Carcich…

Tell us a bit about yourself, Emily? (What school do you attend, what town do you live? What year are you graduating? Tell us about your family? etc.)

I am a junior at Jefferson Township High School. I have one older sister named Hannah.  My whole family is very into volleyball and almost everyone plays. My dad is the head coach  for Wayne Valley boys and girls volleyball and my sister and almost all of my cousins have played volleyball in high school.

My life has always revolved around volleyball.  In fact, my mother was induced on a practice day so my father could be present and not miss any games.  I have had a volleyball in my hands since I was a baby but I started official training when I was in the fourth grade.  I think what made me start playing volleyball was that I was around it constantly.  Being the youngest of 5 cousins who all played, I was always determined to be able to play at their level.  At a younger age, I was very into basketball and always thought that it was going to be my main sport but once I started playing volleyball competitively I fell in love with it and now it is my passion.

I am 5’7 and I am a setter. I play for Allegro volleyball club and my favorite position to play is setter.   As a setter you are involved in every play.  Being in the center of all the action and getting to make those critical decisions is always very exciting.

How will your Jefferson high school team do in the upcoming season? Do you have a lot of returning players? What will be the key to success?

I believe that Jefferson girls volleyball will have a successful season this year. Last year we lost eight seniors and have five returning varsity players coming back and two jv swings. Since we are going to have many new players on the court this year I think that the key to success is going to be communication and working hard to be able to achieve our goals.

Tell us about your Falcons teammates. Who do you expect will be this year’s standout and up and coming players?

This year we are going to have a team that is very close and well bonded. With all that is happening with the pandemic we have all come together really well. I think the team dynamic is going to be our secret weapon this year.  I think our team is very well balanced and everyone brings something to the court.

I plan on playing in college and it is always something I have wanted to do. I have not started looking at schools yet but I plan on reaching out to a few very soon.  I do know that I don’t want to go too far from home but I want to be part of a competitive program.

Tell us about your club experience at Allegro?

I have had the best experience playing at Allegro. I started my first national team there when I was in seventh grade playing up to the 14 National team. I have stayed with the same team and coaches ever since.  I am playing on their 18 National team this upcoming club season. I have had the best coaches. I have had Coach Kelvin Lee as my coach from when I played 14’s to now and Coach Manny Rodoussakis from 15’s to 17’s. Coach Manny and Coach Kelvin have truly taught me so much about the sport and have pushed and motivated me to be a better player and an overall better person. I have made many lifelong friendships at Allegro.

You have made a huge impact on your Jefferson High School team as a sophomore setter with over 500 assists. What are your personal goals for 2021?

I would say that my personal goals as a returning captain from last season would be to bring the team very close together and keep positive energy. With our season being postponed until February, it is important that we all stay mentally tough.  As a team I would like to win the conference championship again and go as deep as possible in the state tournament.  I would also love to be able to beat the school record for assists which is currently held by my sister.

During the off season I always make sure to not lose my touch by keeping my hands on a ball. I  workout a lot and over quarantine I incorporated a lot of strength training.  I also worked very hard to increase my vertical and agility.

I would say my toughest competitor was Kenzie Wiggins from Sparta.  Last season I played with her at Allegro which was great but it’s not nearly as much fun when she is on the other side of the net.

Tell us about your Dad’s influence on your volleyball career?

My Dad definitely has had a very big influence on my volleyball career. Having my dad be a coach, he had never wanted to force me to play volleyball because he wanted me to find a love for it on my own. Once I found the love for it on my own he was all in to help me succeed.  Volleyball is really something we are able to bond over and every time I step on the court I play to make him proud.

My biggest support group is definitely my family. My mom, dad and sister are always trying their best to make it to all my games. During my club season we all travel together which I think brings my family closer.

My favorite volleyball story or memory would have to be winning the first ever Jefferson girls volleyball conference championship last season. The team  worked so hard to win and being able to put a banner up in the gym was a very big accomplishment.  We also got to sign the back of the banner which was a very cool experience.

Last year I was awarded first team all conference and most valuable player of my high school team.

In my free time I really enjoy going on hikes with family and friends, walking my dogs, baking and cooking for my family.

My high school coach, Coach Rose,  has really helped me along the way. He has taught me to believe in myself both as  a player and a leader on the team. He is there for me on and off the court. He  loves the team so much and treats us all as his own kids.