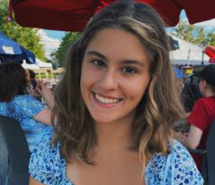 Kinnelon had a magical season, despite being defeated by Bogota in the NJSIAA Group 1 finals last year. After finishing 22-7 and taking first place in the NJAC Freedom division, the Kinnelon Colts will look to Sofia Stack to be a leader. Kinnelon saw 10 girls graduate last June, leaving Stack as the most experienced returning player on the team. She provided some interesting insight as to what we can expect from her and the Kinnelon Varsity volleyball team. “I am currently a Senior at Kinnelon High School, and I have been playing volleyball since 5 th grade,” Stack said, “When I go to college, I want to get my doctorate in physical therapy and open up my own physical therapy practice.”

Though Sofia Stack officially started playing volleyball in the 5th grade, she really found a love for the sport when she was in 4 th grade. Her father took her to see Villanova play during homecoming weekend, and that was where it all started for the Kinnelon Senior. Stack is a 5’10 outside hitter with a 20” vertical. However, it was a change that made the difference for her during club season that was a difference-maker. “I played on Allegro since I was in 6th grade, but this club season I decided to make a switch to Sideout Sports—I absolutely loved it,” Sofia said.

Kinnelon is in a rebuilding stage, after seeing over 80% of their varsity volleyball team graduate. “The Kinnelon girls volleyball team is very dedicated to the sport. We are all very competitive and go out onto the court giving our all every game,” Stack mentioned, “We only have two returning varsity players; however, we have a lot of up-and-coming girls from JV who will definitely be assets to the team this year.”

Of the ten players who graduated from the Kinnelon varsity volleyball team, Tara Levine had the biggest impact on Sofia. “She was the teammate that I looked up to and admired the most, both as a player and as a close friend too,” she said, “She taught me a lot about how to be a better person and how to be a better player on the court.” Sofia Stack added that listening to the Kinnelon coaching staff (Finke and Manco), who will be doing a lot of teaching, is going to be very important if the Kinnelon varsity volleyball team wants to be successful this season.

Stack had some high praise for the players that will fill in around her on the Kinnelon varsity volleyball roster “My teammates are very hard workers who truly love the sport. I feel that all of us definitely feel the pressure this year coming off of an amazing varsity season last year, but we are willing to put in the time and effort to give us our best chance at winning this season,” Stack said, “Some of this year’s top players on Kinnelon will be Nicole Navarro, who is a 6’0” middle hitter that just moved here from Hawthorne. She is definitely going to be a great asset to the team and a tough competitor. Natalie Klinger, who is the other varsity returning player, will be our libero this year. Natalie and Nicole are both very fierce competitors who always give it their all.”

Sofia noted that the Bogota High School team as a whole has been the hardest team that Kinnelon has faced, by far. Kinnelon was defeated by Bogota last season in the NJSIAA Group 1 finals, and Bogota was also victorious in the NJSIAA Group 1 semifinals the season prior. She added, “I had the pleasure of playing on my club team this year with Amber Vasquez and Kiara Polanco, and they are definitely some girls to watch out for this year.” Vasquez and Polanco both play for Bogota and will be playing their Senior seasons this year.

Stack had high praise for her coaches at Kinnelon, “I love my high school coaches, especially Finke and Manco. They truly love the sport and they dedicate so much of their time and efforts to making sure that we are succeeding and improving every practice. Right when our season ends, they start planning on things to work on for the next one. They are definitely great role models as to what a coach and a woman should be like.”

The Kinnelon Senior plays her club volleyball at Sideout Sports and Stack has really enjoyed the coaches she was surrounded with, “My coaches were Jason Davila and Suzanne Riley, and they were definitely two of the best coaches I have ever had. You truly know that they care about you so much, and that is why they work you harder than other teams. They saw the potential in us from day one; even after losing 3 of our players in the beginning of the season, they never showed any sign of worry.”

Stack mentioned that her parents and friends are her biggest support systems, “They [parents] bring me to practice, sit through my long, draining tournaments and give me advice on how to get better. My friends are also such good support, they come and cheer me on at my games and they always know how to lift my spirits when I am feeling nervous before a game.”

Sofia added that the Kinnelon volleyball program has a unique tradition, “Last season before the county semifinals, we started a tradition of the JV, Freshman and coaches writing the varsity team individual letters,” she said, “I have every single one saved and usually I just put them in my bag and read them before games to get me ready and get me excited.”

Sofia’s favorite volleyball player is Victoria Garrick, formerly the libero for the USC Trojans. Stack loves how Garrick talks about the mental and skill aspects of playing volleyball. Garrick is a mental health advocate and is the founder of a non-profit organization called The Hidden Opponent.