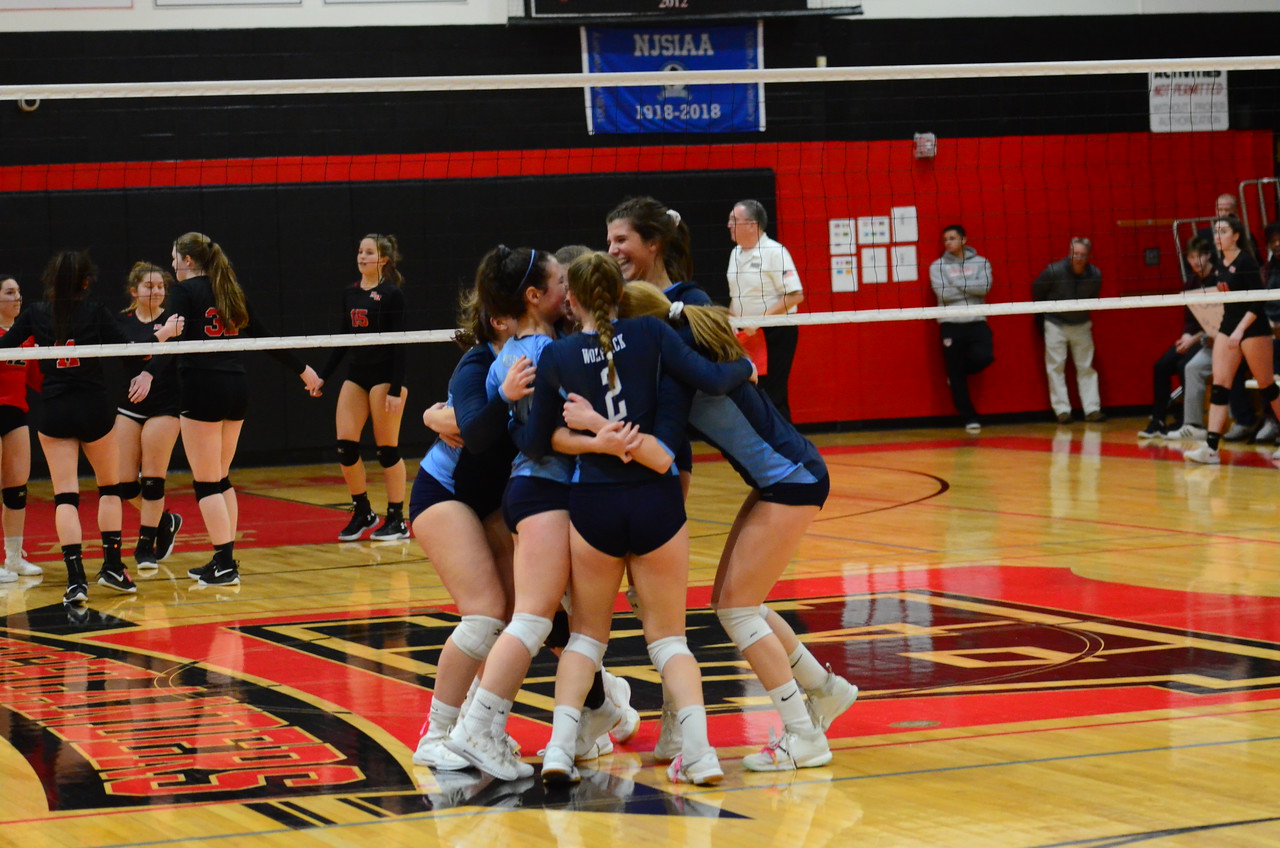 West Morris Central finished last season with a record of 18-7 overall, their season ended at the hands of the Wayne Valley Indians in a three-set marathon. Eleven Seniors from last year’s squad leave many shoes to be filled by the remaining Varsity players and newcomers from JV.

Ava Novello, now a sophomore, made an instant impact during her freshman campaign for the West Morris Central Wolfpack. Novello finished the season with 78 kills and 205 digs. In her final two matches of the season, she tallied at least 22 digs in each.

Novello provided some interesting insight on what we can expect from her and the Wolfpack this upcoming season.

“Hello, my name is Ava Novello and I’m a sophomore at West Morris Central High School. I started on the varsity team as an all-around outside hitter. I am in the graduating class of 2023, and this will be my second year of playing volleyball for WMC,” Novello said, “My family members are for sure my biggest supporters. You’ll never fail to see my mom, dad, my brother, and even sometimes my grandmother at my volleyball games cheering me on! They have been such a big part of my life, and I’m so grateful for all of their constant support.”

She said, “As a little girl I played so many different sports, but I never found one that I really loved. My parents have always told us that learning to be part of a team is an important life skill; my dad, in particular, really pushed me to try new things,” Novello added, “One day, my dad suggested that I try volleyball but I was so reluctant to do it. So, of course like any parent would do, he kept pushing and finally convinced me to try it out. He signed me for a ‘jump-start volleyball program’ at a club in Flemington, NJ. That club was Central Jersey Volleyball Academy (CJVA). I played indoor club volleyball for about two years. But then, when I was thirteen, my dad was also the person who encouraged me to try beach volleyball, which has now been my main sport for so long. I feel really lucky to have found a sport that I truly enjoy and that has taught me a lot about commitment, physical and mental health.”

Ava Novello may not be the tallest person on the floor, standing only 5’6”. Ava mentioned that she is constantly training to improve her vertical, but knows that her skills in other areas of the game can make up for the lack of height.

Novello said, “We all know that height is an advantage in this sport, but I have never let that stop me from working towards my goals. My vertical is a work in progress—it is actually something I’ve been dedicated to improving and building on. Besides volleyball practices, I train 1-2 times a week, for an hour and a half, at Driven Performance in Roxbury. It is a great place to get an intense workout,” she noted, “My trainer, Gary, has always encouraged me to try my best and to work hard, while also having a good time doing it. Since I’ve started training with him, I’ve noticed a huge difference in my agility, speed, and my jumping. His type of training especially helps me with beach volleyball. I play for Stars and Stripes Volleyball Club, with year-round beach training. However, for high school volleyball, my favorite position has to be outside, but I would love to play any position my coach asks me to, to help the team.”

As mentioned before, West Morris Central will be without eleven Seniors from last year’s team.

“I think with the right mindset, positivity, and hard work, I have no doubt our team will do great. With effort, along with good team chemistry, anything is possible,” Novello said.

Novello was not shy in mentioning her two biggest role models for her on the WMC varsity team—Lauren Vanderlaan and Kelly Kaltenhouser.

“They’re both great players and I know that they’re going to kill it this season. They’re also both amazing people who I am so grateful to be friends with,” she added, “They’re kind of like big sisters to me!”

Ava Novello is an incredible talent and looks to be ticketed for a D-I or D-II program for beach volleyball. Due to current NCAA rules, Novello cannot be recruited just yet—she will need to wait until June 15, 2021 for college programs to answer back and exchange offers.

“I am interested in a number of schools, with some that I particularly like, such as FAU, College of Charleston and Oregon,” Novello said, “Although I do have some time before I can be recruited, I’m open to learning about new opportunities, and I’m excited to see what the future brings. Until then, I’m just going to keep grinding.”

She did say that the toughest player she faced last season was Mendham’s Lauren Wilcock, coincidentally, a fellow beach volleyball player.

“She [Wilcock] is a very talented player, who is an outside hitter from our rival school, West Morris Mendham. She is super physical and smart, all-around, which made it challenging to play against her – but I welcome the challenge. She was also a fellow teammate at my beach club! The first time we played against them [Mendham] last season was probably the highest level of anticipation I had for a game, because I knew it was going to be a tough match and we had to bring it,” Novello added, “That game was great overall, from both teams, and it was super intense, considering they had a huge crowd cheering for them [Mendham] and we just had us, Coach Balella, and the parents who came to support. We ended up pulling out the win, and the feeling was amazing! There was so much adrenaline during that game; it was probably one of the best games I had played that season, offensively.”

Speaking of Coach Balella, his outside hitter had some glowing remarks about him.

“Coach Balella is the head coach for our varsity team. He is also currently my driver’s ed teacher (which is super fun). I genuinely think that he is not only an amazing coach, but a great person, too. He knew when to push us in practice, but he also knew when the right times were to have a little fun. Coach B is definitely my favorite person to see in school, and chit-chat with during classroom—I’m super excited for the next 3 years with him as my coach,” said Novello.

Novello plays her club volleyball at SAS (Stars & Stripes). Playing at that club, in particular, has allowed her to realize her potential as a beach volleyball player.

“My coaches Mike Adams and John Bracco are amazing, they have offered tremendous support for me since I joined the club. I’ve grown a lot as a beach player under their guidance and have stretched my athletic abilities. They constantly push me and challenge me to be better,” Ava Novello added, “My SAS team and coaches are like a second family and I absolutely love the time I get to spend with them on the sand.”

Ava has a very large support group when it comes to guests attending volleyball games.

“My dad has been to every single game and it is always hilarious to see him at the games because he gets so anxious for us that he has to pace back and forth, either yelling, or cheering. My mom has a busy work schedule, but when she comes to my games, she’s the loudest mom there,” Novello said, “My best friends, Liz Moran, Tara Reilly, Lauren Allocca, and others, are the best friends I could ever ask for. They constantly support me on and off the court. Every time I saw them in the stands supporting me, it automatically made me even more excited to play. They couldn’t be there all the time, but when they could, it meant a lot to me. I’m also friends with a lot of the girls on the freshman team last season, and they were always cheering for me, and I’m so grateful for all of them.”

Novello looks up to beach volleyball stars Kerri Walsh Jennings and Taylor Crabb, being that the Wolfpack outside hitter is looking to pave the road for her future in beach volleyball.

She said, “Ever since I started playing beach volleyball, I’ve looked up to Kerri. She’s a really great role model and person, I also have a signed visor from her. I like Taylor Crabb because of how great of a player he is, even though he is technically short for men’s volleyball. What he lacks in height he more than makes up in skill –something I can relate to!”

There is no doubt that Ava Novello will be looking to improve on an already impressive freshman season.

Novello mentioned, “My goal this year is to overall be more confident on the court, and to better my skills in certain areas, like blocking. Since I’m naturally more of a defensive player, I want to get even more kills than I did last season, and try to earn more digs as well. I know with the help from my teammates and Coach B, the sky is the limit, and I’m so excited to be back on the court soon.”