Ryan Karbowniczak is a Big Presence for Maruaders 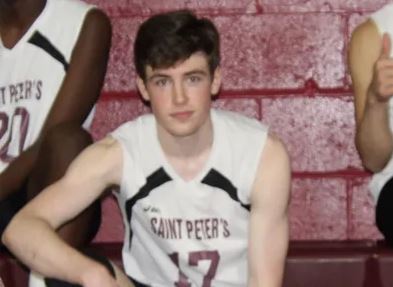 One of this years standout middles in NJ high school volleyball is Ryan Karbowniczak of St. Peter’s Prep. Ryan and his 6’4″ frame is an ominous figure for opponents whether playing for the Marauders or his club team at SOS. He has a solid vertical and has an uncanny ability to stay airborne, ala Michael Jordan, to time and strike his hits in the best manner. He has flown a bit under the radar with the cancelled season in 2019-2020 but we expect 2021 to be an absolute breakout.

As a sophomore, Ryan put up some impressive numbers for kills and blocks. Remembering he was on a team with players like Chris Larkin (SUNY New Paltz Dlll) and Mason Matos (NJIT Dl) on a squad that went to the Group 4 sectional finals where so many other stars were getting headlines. This year as a senior, Ryan will be an offensive and defensive weapon for SPP as they bid to return to the sectional finals.

At the club level, Ryan excelled last season despite an injury. At 17 and just a junior, he played up on the SOS 18-1 team that was considered a top 3 team in NJ. The higher caliber of play has set him up well for his senior campaign. This year, he is one of five seniors on the 18-1 team that will look to make its mark starting this weekend in their first club tournament of the year.

Ryan is prioritizing his academics as he searches for college choices. It shows his big picture smarts in regard to his end goals. From our interactions over the past two years (Ryan was an early fan of the website), it’s very clear that he is a bright and articulate young man with the drive and determination to be extremely successful in life. He is willing to go the extra mile whether he is educating himself, becoming a part of a new venture, training for sports, battling through adversity or injuries, or even commuting to school for 90 minutes each way to get to SPP from Rockaway. All traits of a solid leader with a bright future ahead.

Here is our interview with “Karbow”…

Tell us a bit about yourself, Ryan?

I attend St. Peter’s Prep in Jersey City and am a part of the class of 2021, and I hail from Rockaway Township, New Jersey. As for my family, I live with my parents, both of whom I get my height from (both 6’2”). I also have an older brother, Jake, who currently attends the University of South Carolina (Class of ‘23) as a member of the Air Force ROTC program there.

This upcoming spring season will be my fourth year playing volleyball. Initially, I was inspired by having fun playing in gym class, and not making my school’s basketball team was just fuel for me to take up this sport and become the best I could be at this unfamiliar sport.

Currently, I am about 6’4” and my vertical is around 32-33”. I play middle blocker, which is also my favorite position to play. As for club, I played a season at Powerzone Volleyball Club in Denville before coming to Sideout Sports VBC for my junior and senior year club seasons.

Tell us about your Prep teammates. Who do you expect will be this year’s standout and up and coming players?

Of the returning players, I’m lucky enough to have played my sophomore year season with three other players in my class year (Aidan Apito, Tim Jimenez, and Pius Mwemba). While I have no doubts about any of their abilities, I am certain that our standout player will be Aidan Apito. Ever since I first saw him step on the court, he’s been on another level, and he has been improving at a consistent rate, and you can expect to see a solid block put up by us this season. However, the player I most want to see step up is Joe Parise of the class of ‘22. With the loss of some major passers in the past two years, I know Joe has been playing club and working hard, so I’m looking forward to a big production from his back row.

I am currently planning on playing for a club team in college. This is mostly to avoid volleyball affecting my decision in the college I will truly want to attend, as most of my options would result in sacrifices made from my overall ideal school selection.

You played very well for the SOS 18-1 team last season as a junior after watching you at several tournaments. Sophomore high school season, you made great contributions with 72 kills and 20 blocks. What are your personal goals for this season?

Personally, I’m hoping to reach at least 100 kills and 30 blocks for my season, which I believe is certainly attainable, and may change as I get a better idea of the overall season’s potential. I have also been working on improving my serve, which was inconsistent, to say the least in my previous seasons, so I’m hoping to nab some points via aces and a lot more service points in the upcoming season.

The Marauders have 4 returning varsity players from the 2018-19 team. What is your expectation for this years Marauders squad?

With our large quantity of returning starters compared to most other teams in the state, I believe that we can produce an even greater season than we did in 2019. With the club experience of myself, Aidan, Pius, and Joe along with the ever-improving athleticism and setter ability in Tim, I expect to take the Hudson County Championship once more, and I have the utmost confidence that we can win the North II sectional title as well, and strive to make an impact in the TOCs.

Tell us about your club volleyball experience at SideOut Sports.

Ever since I had gone to a SOS clinic at the beginning of Junior year I have been drawn to the place. Coach Jason Davila has been and continues to be a great coach for me as well as the whole team, never failing to be hard on us while still being as constructive as possible. I felt it was a great opportunity last season for me to play with a team of mostly seniors and play up against some amazing competition. Despite having setbacks such as my finger fracture and knee injuries that put me below my teammates, I only ever saw this as a source of motivation to overcome the obstacles, which is something I would not have felt as strongly had I not experienced a club season at SideOut.

Most of the time in the offseason when I’m not playing club I am in the gym working out. Especially recently with the months on end we had to endure without volleyball due to COVID, I decided to partake in the Knee-Ability Program from ATG, something I was able to do with minimal equipment that I’ve seen improvements from that were previously unthinkable.

My inspiration comes mostly from the thought of playing itself. My time away from the court has made me strive for each and every opportunity I have to play volleyball, and the mental escape the sport has provided for me keeps me inspired.

The biggest supports that come to mind are my Mom and Dad. Both of them have always pushed me to test my limits whether it be by attending Prep in the first place or working out and practicing consistently, and they have always given me the tools to pursue my goals. Another one of my supports, specifically through volleyball, would be my friend Jay Post (Class of ‘20), who always has and continues to hype me up and give me way more credit than I deserve on the court.

How are you and your family dealing with current world situation with COVID-19? How did the cancellation of the Spring high school season affect your team?

My family was definitely impacted in various ways by COVID-19, but we are definitely managing for the time being. The cancellation of the 2020 spring season was definitely a rough one. The potential we had was undeniable, and it was disappointing to see a season with the outside duo of Aidan Apito and Chris Larkin go by the wayside, but I think that we are still full of potential to take home some hardware in 2021.

To keep me occupied outside of physical activities I enjoy playing piano, guitar and bass. Nothing spectacular, but hobbies nonetheless.