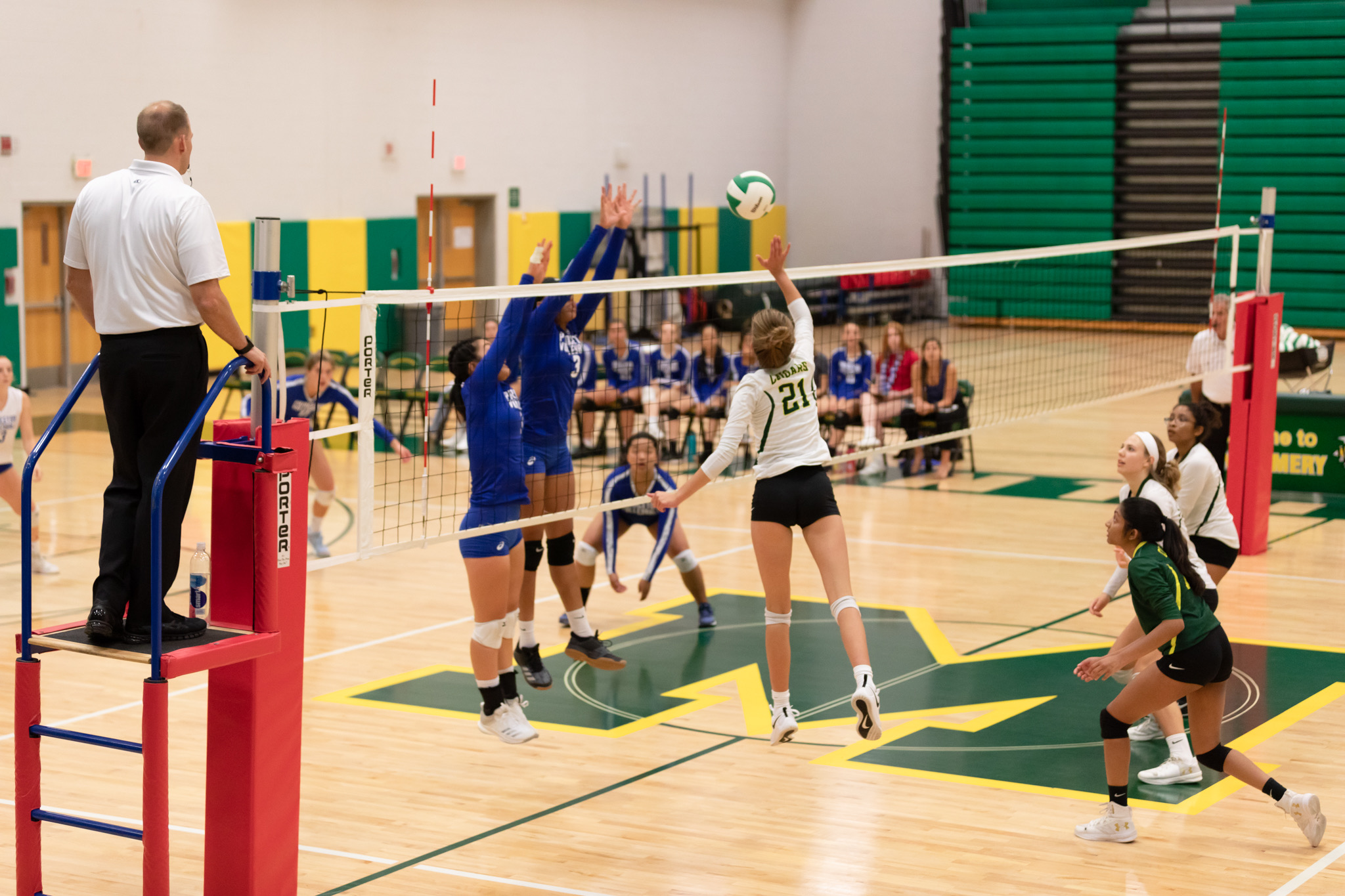 It’s just not common to have a freshman get a spot on a high school varsity volleyball team. Especially at a school the size of Montgomery. Typically you will see a varsity team ladened with upperclassman and an occasional mix of a sophomore. But the Cougars had two impact freshman on last years team that finished 18-9 and made it to the Somerset County semi finals as well as the second round of state playoffs.

One of those impact freshman was Georgia Wess. Georgia, as a freshman, joined her sister Elizabeth for her senior year. Ellie and G shared a great season together with a golden opportunity to stand side by side at the net during many of the Cougars matchups. Georgia credits Ellie with providing her the inspiration to play volleyball as well as be a major mentor both on and off the court.

The 5’10” middle has the potential of being a standout player in the state of New Jersey. She has solid athleticism, a better than average float serve with substantial movement, tremendous instincts on the block, and the ability to put the ball away with authority despite just being in her sophomore year.

We expect the Montgomery team to have an equally succesful season as their last campaign. The Skylands conference is a rough crowd to hang with but we expect the Cougars to fight for the Raritan Division title. Montgomery had impressive defensive stats putting up over 1,500 digs last year as a team. The Cougars will sport 7 returning varsity players that will include seniors Andrea Katramados 115 kills, 92 digs), Cristina Fogg 200 digs), Gabriella Hansen 62 kills, 10 blocks), and Sierra Edmonds 58 digs, 23 aces). Georgia and Antonia Ipeker will be rising sophomores that return from the varsity level. Antonia posted over 200 digs as a freshman.

Georgia will be playing with CJVA 16-1 National Black squad for this upcoming club season. It will be one more opportunity for her to hone her skills before the High School season.

Here is our interview with Ms. Wess…

Tell us a bit about yourself, Georgia?

My name is Georgia Wess and I am a sophomore at Montgomery High School and graduate in the class of 2023. I have an older sister who is attending William & Mary, my parents both work in pharmaceuticals. We live in Skillman, and besides volleyball, I love to cook and also work at a local restaurant.

I have been playing volleyball for the past three years, staring at Core Volleyball and I currently play at CJVA. I started by messing around on empty courts at my older sister’s tournaments, and after nonstop urging from my sister and parents I joined a fall league and I was hooked.

My favorite position to play is either middle or outside, and I love being able to switch between the two because they each bring such different challenges. While playing middle is about quick tempos and your setter connection, outsides need to be versatile and play both back and front row. I am currently 5′ 10, my standing reach is 87 inches and I have a 24 inch vertical. This year, I am playing on CJVA’s 16 Black team as a middle blocker and outside.

Tell us about your Montgomery teammates. Who do you expect will be this years standout and up and coming players?

Like most other players in New Jersey, it was disappointing to not be able to get back to playing with my teammates in August. This year, we will have a returning varsity setter, Emily Barlin, who is a great leader on the court. In the backrow, a teammate from CJVA Nia Ipeker, will also be a returning varsity player. Another crucial part of our offence is Andrea Katramados, an outside hitter. Overall, the team has many returning players and great bond.

NJP considers you as one of the top players in the state. Can you tell us about which colleges you may be interested in attending and if you plan to play VB in college?

I do aspire to play volleyball in college. I can see myself at a small to medium sized and academically challenging school, most likely on the East Coast.

Montgomery had an outstanding season last year finishing 18-9, making it to the Somerset County semi-finals and into the second round in states before being knocked out by power North Hunterdon. What is your expectation for this years squad?

It was an amazing experience to have progressed to states and county finals, as well as winning our conference for the second year in a row. This year, we are in a new division and will be facing some of the best teams in the region. This will be a great opportunity to face the best competitors and grow as a team, and I look forward to playing against many of my club teammates, especially from North and Central Hunterdon. We have an excellent head coach, Kelsey Donovan, who will make sure we are ready for the challenge!

As a freshman, you made an impact your first year posting 90 kills, 63 digs and 9 aces. What are your personal goals for the 2021 spring season?

This season my main goals are to improve my attacking and blocking. I will most likely be playing middle this year, so my goal is to beat my previous kill and ace statistics from  freshman year and continue to increase my vertical. I want to be seen as a leader on the court, and improve my skills as an all-around player. With graduation, we lost both of our strong middles; I want to step up and fill their shoes as a central force in our offence.

One thing that made my freshman season so special was having the opportunity to start on the varsity team with my sister, Ellie. She is three years older than me, and the main reason I started volleyball. The season was amazing because I got to play at the net right next to her, and she was always there for me when I needed someone to talk to or get advice. She inspires me, and it was nice to spend so much time with her both on and off the court before she went to college.

Aside from my sister, my parents have both been huge supporters of me playing volleyball. They both have made so many sacrifices to drive me to tournaments, watch me play, and help me with anything I need. They have been there for me ever since I started, and always motivate me to keep playing and push myself to a higher level. My club and high school teammates are also a huge part of my support group. I have made my closest friends through volleyball. Through all of the travelling for tournaments, early practices, long bus rides, and lots of late night team dinners, I have made so many lasting memories.

I recognize the health and economic challenges that many are facing, and I know that my family is fortunate that my parents and I are able to work and study at home. The delay is tough because the rhythm of the volleyball year has been disrupted and we have all lost valuable court time. Even though it will be in Spring, I can not wait to get back with my high school team and hit the court.

Tell us about your club volleyball experience.

This will be my fourth year playing club volleyball, and third at CJVA. We play locally in the GEVA Power League where we compete with the best teams in the Tri- State Area. In a normal year, we play in larger tournaments up and down the East Coast but with Covid restrictions, we expect that this year will be a little different. While we were disappointed to end last season so early, we finished on a high note, winning the NJ Grand Prix and a bid to AAU Nationals. We have a strong team with lots of returning players, and am excited to see what we can achieve this season.

I can honestly say that every coach I have played for has motivated me and helped me develop so much as a player. I have been especially fortunate to have had the same CJVA assistant coach for the past 3 years, Bart Blair. Ever since my first year at CJVA, Coach Bart has pushed me and my teammates and expected a high level of play from us. He has been an important part of my growth as a player and leader on the court.
Also here are some pictures and video links: