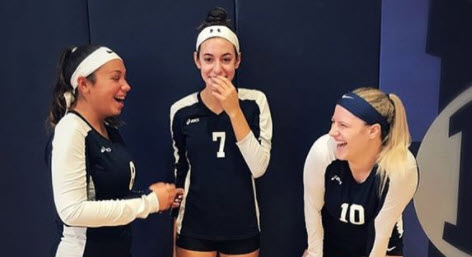 For the past two seasons, Rachel Ferrara has been running the Howell offense as setter, and as she enters her senior year, she already has acheived a school record for assists. Her leadership will standout this year as the Rebels have lost a considerable amount of senior varsity players to graduation and will look to their younger core to step up and contribute at the varsity level.

Rachel has termendous on-court insticts. She maintains strong positional play while always making good choices on her attack options. She possesses solid balance and soft hands that provides her teammates with buttery sets and maximum scoring potential. Alexia Rodrigues will be a major weapon as a senior for Rachel to look to on the attack.

Last year, the Rebels looked unstoppable running up a 14-1 record and looked to avenge their only loss to shore power Donovan Catholic in the conference tournament. After losing the first set, they battled back to take the second, and almost got by the Griffins but lost in three. This appeared to take some of the wind out of the Rebels sails as they lost three of their last four to finish 15-5.

The Shore can be merciless year to year with strong teams emerging every season. Howell is projected to be a top 2 team in Shore A North once again and is expected to battle Wall for league honors.

Here is our interview with Ms. Ferrara…

Tell us a bit about yourself, Rachel?

My name is Rachel Ferrara, and I attend Howell High School. I live in Howell, NJ, and I am graduating with the class of 2021. I live with my mom, dad, and 14 year old brother, Shane.

I have been playing volleyball for 4 years now. I started to gain an interest in volleyball in 8th grade when I would play in gym class so my parents signed me up to do camps and clinics to learn more about the sport.

I am a 5’3’’ setter and I play for Ocean County Volleyball Club.

Tell us about your Rebels teammates. Who do you expect will be this year’s standout and up and coming players?

I have really close bonds with all my Rebel teammates.  I think that this year’s up and coming players will be Emma Spanville and Olivia Hill. They both received varsity time towards the end of last season and are always putting in all their effort on the court. Ultimately, it is the coach’s decision on who will play, and I will support those decisions.

The Rebels had an outstanding season last year finishing 15-5 after jumping to a 14-1 record early in the season. What is your expectation for this years squad after losing 80% of your kills and blocks to graduation?

Losing 5 of our starting lineup is going to be a hard adjustment. However, many of our players play with various clubs, and I think that the effort that we  put in during the off season is going to help us come back better than ever. Since we had such a successful season in 2019, many underclassmen were given some varsity playing time, which will add to their comfort level on the court this season.

You averaged 7 assists per set last season and had 27 aces. What are your personal goals for the 2021 spring season?

Last season I broke 2 school records: Greatest amount of assists in 1 season, and greatest number of career assists. I would love to exceed my own record  and maybe break the record for number of aces in a season.

NJP considers you as one of the top players in the state. Do you plan to play volleyball in college and if so, what school are you researching?

I am still considering whether or not I want to play volleyball in college. I would love to play at Stockton University since that is one of my top schools, but I am still unsure.

Tell us about your club volleyball experience at OCVBC.

I have had a great experience playing club at OCVBC. I have met some of my best friends and made great memories traveling and going to tournaments. I am looking forward to a full season this year.

Can you tell us about your best memories from your junior year season?

The best memory from my junior year season was beating Wall HS in 3 sets for the first time in a really long time. It was a great team effort and you were able to see how hard everybody was playing.

My parents are my biggest supporters because they are always at all of my games, even if they have to leave work or travel hours away, they are always there to cheer me and my team on.

Last season, in the 2nd round of Shore Conference, we faced Donovan Catholic, which was our only previous loss of the season. We all knew it was going to be a tough game. Donovan went into it thinking they were going to crush us like they did the first time, but we had grown so much as a team and we proved that we deserved to be there just as much as they did. Even though we lost, we took them to 3 sets, which nobody was expecting.

I have been the starting setter for Howell High School since the beginning of my sophomore season and helped our team capture its first ever Class A North Shore Conference Division Championship in 2019, while becoming its all-time assist leader. I was recognized as a player to watch for in the 2019 season, which led me to being named to the 2019 Shore Conference Class A North All Division Team. https://sites.google.com/site/shorevolleyballca/2019-girls-season/2019-girls-preseason-a-north

Another link from my past season include: Howell girls’ volleyball team clicking on all cylinders in 2019 – centraljersey.com.

Member of the 2019 Shore Conference: All Division Team – A North (Selected by the Shore Volleyball Coaches Association)

I don’t have any specific music that I listen to, but on the bus ride to games, the seniors always play music and the whole team always sings along together which always gets us excited for our games.