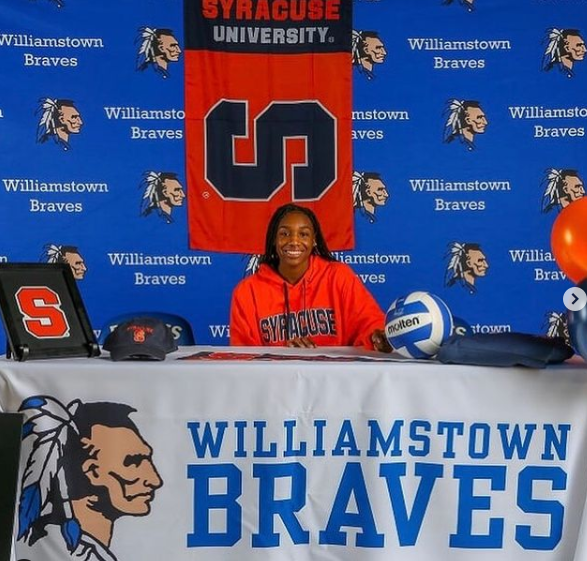 Williamstown’s Raina Hughes is the newest members of the Syracuse University volleyball program. The Opposite Hitter led the 30-4 Braves to a 2019 Group 4 State Championship. Raina put up 208 kills and 36 blocks in her junior year. She will forego her senior year on the court and will be starting at Syracuse in January 2021.

Raina is an outstanding right side hitter. She has the size at 6’1″ and possesses strong athleticism and vertical jump. Her approach jump exceeds 10′. She has a powerful left arm swing and can put the ball straight down with her spikes with authority. She has the ability to dominate on the attack and has proven to be unstoppable in multiple games last season including the state title game where she put down 16 kills in a 2 set victory over North Hunterdon.

Hughes can also be dominant on the block. She has excellent technique and instincts at the net. She is a force to be reckoned with both defensively and on the attack. She will fit in nicely on a Syracuse team that finished 4-4 in their very competitive pod, losing to Notre Dame and Louisville. They were ranked as high as 6th in the nation. The Orangemen have top notch talent on their roster including 6 international recruits. She will battling for playing time next year with 6’3″ Freshman Right Side Naomi Franco who started in 7 of 8 matches.

There is no doubt that Raina is a solid D1 talent. We will be following her career over the next 4 years closely and wish her all the best as well as congratulate her on this outstanding achievement.

Here is our interview with Ms. Hughes…

Tell us a bit about yourself, Raina?

My name is Raina Hughes and I attend Williamstown High School. I currently live in Williamstown and I am graduating in December 2020 (early enrollment). My parents, grandparents, and siblings have been the best support system for me, coming to every game and even if they can’t make it they are rooting for me at home. They always believed in me and encouraged me to try my best at anything I encountered which has led me to this point.

I have been playing volleyball for about 3 years now. I started playing club volleyball during my freshman year. I originally started off playing in a recreational league to see if I liked it.  After a few weeks of participating in that I tried out for Eastern Volleyball Academy and I ended up making the team. Everyone there was so supportive of me and saw my potential and it grew my love for the game of volleyball.

I am 6 foot 1 inch tall, I’m not sure what my vertical is right now since I haven’t had it measured in awhile but I am a right-side hitter and I currently play at Eastern Volleyball Academy. I played at East Coast Crush the previous 2 seasons.  My favorite position to play is right side.

Tell us about your Braves teammates. Who do you expect will be this year’s standout and up and coming players?

My Braves teammates were such awesome teammates. We always picked each other up when down, worked together as a team, and they were such great people on and off the court. Volleyball is a team sport and all of my teammates realized that instead of thinking about ourselves individually. It was such a fun time every time I was around them and I will miss that so much. I believe we have a lot of returning players and also some freshman who will make a huge impact in the continued success of the Williamstown Volleyball program.

NJP considers you as one of the top players in the state. We see you have committed to play D1 volleyball at Syracuse University. What drove that decision?

What drove me to commit to Syracuse University was the opportunity to get a college education at one of the best schools in the country  and also to be able to play volleyball in one of the Power 5 conferences.  I also love how beautiful the campus is and how welcoming the coaches and my future teammates were.

What do you plan to study at Syracuse or what is your career path?

I plan to study Health and Exercise Science with the hopes of one day becoming a Physical Therapist.

Williamstown had an amazing run to the State Sectional Championship last season. Tell us about your experience?

Winning the Group 4 State a championship was such an amazing experience but also for all the good times that we experienced along the way. I know that every last one of us worked hard to get to that point and always supported each other. The whole team bonded so well so the State Championship was the cherry on top with friends that I will have for a lifetime.

Tell us about your club experience at East Coast Crush.

My experience at East Coast Crush was so eye-opening for me. Coach Jeremy and Ali taught me so much about myself and about the game of volleyball. Every time I went to practice I left a better player. I will miss it and I will  also miss the friends I made there.

Can you tell us about your best memories from your high school years?

One of my best memories from my high school years was winning the state championship. I loved the on-edge feeling it gave us as a team. I would love to go back in time to experience that feeling again. Another great memory  was the day that I committed to Syracuse University.  That day was a proud moment for me because I came such a long way as a volleyball player in such  a short period of time, and with this accomplishment, I can show younger players that with hard work and dedication anything is possible.

I also love to cook and bake for my family.

My support system is my Mom, Dad, sister, brother, and all of my grandparents. They always try their best to make every game and even take off work to come to all of my tournaments. They are the best support system anyone can ask for and I am forever grateful for them.

My favorite volleyball player is Yossiana Presley who plays for Baylor University. She inspires me because she is such a great leader for her team and she works so hard to be the best player she can be everyday. She is an amazing 6 rotation player and can jump super high which are my future goals.