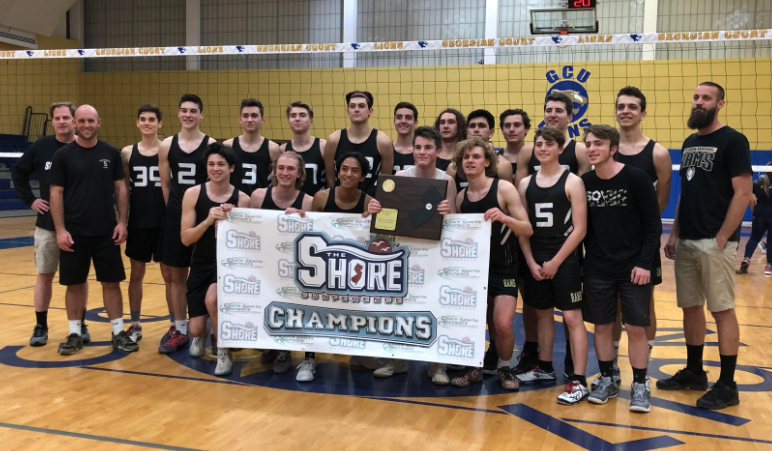 With the Boys season cancelled last year due to COVID, we are left with an information void about the emergence of rising freshman and sophomores volleyball athletes at the high school level in New Jersey. But there are certain players at the club level that truly standout that will drive their high school teams success come Spring. One of those players is Tommy Deakyne.

Southern Regional is known as a breeding ground for New Jersey’s top boys players. They continue to produce top prospects at the shore and benefit from year round play, summers at the beach, and 3 seasons on the court. Since 2009, the Rams have been a force in NJ HS volleyball reaching the championship game in their sectional group every year, reaching the state final every year but one, and coming away with 6 state championships. Southern players like Liam Maxwell, Matt Maxwell, Justin Kean, and Brennan Davis have provided a quality pipeline to NCAA D2 program Belmont Abbey in North Carolina. And as another star is emerging for the Rams, we will see what college benefits from his talent.

Tommy is a super student, has an amazing level of athleticism, and a superior talent for the game of volleyball. Over the last four years, he has immersed himself in a game he loves and has performed at the highest level in in his age group at the club level. This year, he is on the Warren Six Pack 18-1 squad, traditionally known as NJ’s best team, and he may just be their best player.

Deakyne has grown into a man since the last high school games were played. His 6’2″ frame, slender and muscular physique, and outstanding instincts and game intelligence set him apart from his peers. He has a smooth swing which generates immense power, even from back row sets. And he is NOT a one dimensional player. He has mastered his passing skills and has the quickness to get to all spots on the floor with speed and wingspan. His vertical makes him a high powered weapon on the attack. And above all, he is mastering the psychological advantages and mental toughness inspired by his coaches to succeed at the collegiate level.

He will benefit from some of NJ’s best players surrounding him at club as well as solid core of talent at Southern. Under normal circumstances, we would be projecting a 300+ kills season for Deakyne, especially with the high game frequency that Southern usually schedules. But a Championship season will mean more to Deakyne and his teammates than any personal statistic. We remain hopeful that recent vaccine news will drive some normalcy by Spring. Which all remains to be seen.

NJP considers Tommy Deakyne to be a top candidate for NJ High School Player of the Year for Spring 2021.

Here is our interview with Tommy…

Tommy… tell us a bit about yourself?

I attend Southern Regional High School and I live on Long Beach Island. I will be graduating in June of 2021. In my family I have my mom, AnnMarie Deakyne, my dad, Terry Deakyne, my older sister, Zoe Deakyne, and younger sister, Macy Deakyne.

I have played volleyball since 8th grade. During my middle school years, I was trying to find my sport, and my sister played for Southern and Sixpack at the time. So, my family suggested I try volleyball. I went to the Warren Sixpack tryouts days later and met Coach Pedro and teammates that became lifelong friends.

I am 6 feet 2 inches. 48 inch approach vertical. I play for Warren Sixpack and SOVBC. I am versatile player and will play in any position my coach needs me but my favorite position is outside hitter.

Tell us about your Rams teammates. Who do you expect will be this year’s standout and up and coming players?

This year, we have a great group of guys that I’ve been stoked to play with ever since freshman year. Alongside me in the senior class, setter, Dylan Lockwood, libero, Ethan Case, second outside, John Barberi and middle hitter, CJ Schmidt. Some juniors that are up and coming are Matt Leonard, Matt ReKuc, and Nick Piserchia. As well as the next Kean, Lucas Kean.

I do plan on playing in college. I’m looking at a lot of teams including Virginia Tech, University of Wisconsin, Penn State, Clemson University Club teams, and Stevens Institute of Technology for NCAA. During my college search Coach Pedro stressed how I really need to find a college fit for academics first, then volleyball. My intended major of Food Science & Technology and competitive club programs lead me to my top 4 colleges.

Tell us about the legendary Southern Coach Eric Maxwell.

Coach Maxwell has been a major influence in my volleyball career. I’ve been blessed to be part the program, since freshman year. Being surrounded by a great group of upperclassmen made me strive to be a better player. Coach Maxwell knows a lot about the game itself, but I believe its his influence beyond the court that has impacted me most. Coach introduced me to John Wooden’s ideas and as a freshman and each year following as a way to balance our mindset. The physical game is just as important as our mental game. I keep a copy of John Wooden’s book, Wooden: A Lifetime of Observations and Reflections On and Off the Court in my backpack. From what I see everyday during practice, he is very dedicated to our success and approaches it personally. The ring on our finger is our goal each and every year.

What are your personal goals for this season?

This season, as every other season, I want to win state finals. Unfortunately, my junior year, our season was practically cut completely from us, so to have the chance to get back out on the court and represent my school with such success would be a personal achievement to me.

Southern has a storied history of success, especially over this past decade. What is your expectation for this years Rams squad?

I am excited to work with this years Ram squad. We have a lot of seniors, including myself, so a lot of experience of the game atmosphere within one team. As always, each one of us want to follow in the footsteps of our past teams, win the state championship. Ultimately, I think I can speak for my fellow players across New Jersey, we just want to get out on the court and play. As our season was canceled, I had time to reflect on how much I truly love every aspect of this sport, the practices, bus rides, and of course the games.

What is your best memory thus far of high school volleyball?

Thus far, my best memory was playing in the state semifinals my sophomore year.

Tell us about your club volleyball experience at Warren Six Pack and SOVBC.

I have been playing at Warren Sixpack since 8th grade with coach Pedro Trevino. It’s been awesome playing with these guys for my club volleyball career. Our level of competition is challenging and intense. Being able to travel to Nationals in the Open division from age 14 has exposed me to a high level of competition which I believe made me a stronger player each year.

I plan to study Food Science & Technology or Civil Engineering in college.

During the offseason, I play for Warren Sixpack and SOVBC-18. In the summer, I am an ocean lifeguard for LBTBP which keeps me in good physical shape for the upcoming season.

I am in the Top 20 academically of the Class of 2021 at Southern Regional.

When I was younger my uncle passed away, and he meant a great deal to me. His lucky number was 29. In honor of him, I have always worn the number 29 as my motivation and inspiration to work as hard as I can.

Grateful for the love and support of my family. They drive countless miles, pack coolers of meals, videotaped hundreds of sets and always believe in me.

My other hobbies are playing ping pong, disc golf and swimming.

How are you and your family dealing with current world situation with COVID-19? How did the cancellation of the Spring high school season effect your team?

My family and I are staying safe with the COVID-19 pandemic still happening. With our spring high school season being cancelled, it was very unfortunate and heartbreaking. I was excited to play with seniors, Justin Kean and Jack Healy, for one last season. However, I know at least my Ram squad has bounced back from this situation and we are looking good in the offseason. When all schools were remote, my older sister was home from college and my younger sister, Macy who is 9 was also home. We decided to get outside and pepper as often as possible. I think Macy will be starting her volleyball career very soon!

My club coach, Pedro Trevino, has been a huge part of my success. I’ve been working with him ever since 14’s. He’s the one who initially started my passion and motivation for volleyball by truly guiding me to where I am today. Coach Pedro led me down the path to be an outside hitter, always served as support on the bench when game situations got tight, and always gave me opportunities to make myself better. Starting out as an outside at 14’s, I really didn’t know what I was doing being introduced to the strategy of the game. Year after year, all of Pedro’s fundamental teachings became more apparent and allowed me to improve as a player. Competing at BJNC is perhaps the most challenging yet rewarding of atmospheres.