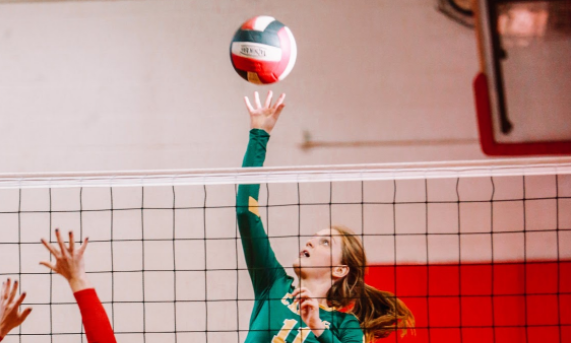 Charlotte Cade has prepared for her senior season at Red Bank Catholic for the past three years. The Warren Six Pack outside has known what success looks like as her varsity team is 31-18 over her last two years at varsity. But she also is familiar with some of the disappointments that come from playing high school volleyball in a state that has well over 300 teams. The private sectional is crazy tough come state playoff time and RBC has felt the burn of first and second round losses these past two years. Charlotte is hoping this year will be different.

Despite losing 6 solid senior varsity players to graduation, the Casey’s have a solid core of returning players and will have at least 8 seniors on this years squad and some new talents coming up through the ranks that will again place RBC in a strong position for a winning season. Southern appears to again be the cream of the crop at the shore taking down an overall #5 preseason ranking in NJ. But 5 teams make up the next grouping of potential challengers to the Rams. Division foe St. John Vianney along with Toms River South, Donovan Catholic, and Barnegat join RBC as top challengers to Southern for Spring 2021. Of course, all depending on what happens with the pandemic and what a potential schedule will look like.

Charlotte was dominant last year. She posted 151 kills and 127 digs as a junior. She contributed 8 blocks as well as a team leading 49 aces on the service line. She is the all around contributor that most coaches cherish, not only for her technical skills, power, and defense but as a senior leader that is capable of bringing energy and passion to raise the game of her teammates.

Cade will take to the beach during the upcoming indoor lock down or find some other outdoor court to hone her skills. She has even tried some more out of the box methods to stay in shape as you will see in her interview. We love her creativity and the spirit she brings to make herself a better player. Charlotte is a one of a kind.

Here is our interview with Ms. Cade…

Tell us a bit about yourself, Charlotte?

I am currently a senior at Red Bank Catholic High School. I live in Middletown, New Jersey and have one older sister. I have a black labrador named Kelsey who is an important member of our family.

I started playing volleyball in the summer going into freshman year. I had played tennis my whole life leading up to high school and was set on playing on the school team. My parents had me try a camp for fun and I instantly loved the sport. I had to choose between tennis, the sport I have been playing my whole life and volleyball, which I had two weeks of experience. I chose volleyball and wouldn’t change my decision if I had the chance.

I am 5’9 and I am outside. I play for Warren Sixpack and my favorite position to play is as an outside. As an outside, you get the best of both worlds playing front and back row.

Tell us about your Casey teammates. Who do you expect will be this year’s standout and up and coming players?

I am really excited for this upcoming season, especially because we have eight returning seniors. I have been very lucky to play with such a great group of girls. Six seniors graduated this past year, opening many spots on the starting lineup. I feel we are a very well balanced and connected team, which helps in our team’s success. I am really looking forward to seeing the continued growth of returning starting varsity players Daniella Gangemi (S),  Kyleigh Burough (OH), and Alexis Pavlinec (MB). As well as varsity players Kate Bagnell (DS), Lauren Jeremich (MB), and Seton Smith (MB).

RBC won 14 of their last 19 games last season and despite losing 6 solid senior to graduation, have 10 quality returning varsity players for the revised Spring season including yourself, setter Daniella Gangemi, outside Kyleigh Burough, and middle Alexis Pavlinec.  What is your expectation for this years squad?

I have great feelings for this upcoming school season. We did lose a lot of seniors, but they were great role models for us and taught us a lot. By the end of last school season, every junior (now senior) was moved up to varsity, so we all practice playing together. I am very excited to get back in the gym with my team, it can’t come soon enough!

You had a truly outstanding season as a junior with 151 kills, a team leading 49 aces, and 127 digs. What are your goals for this upcoming season?

Tell us about your club volleyball experience at Warren SixPack.

I have had an amazing experience at Warren SixPack. The coaches are all so supportive of helping every player be the best they can. Also a lot of past players help coach and practice with us, which brings a whole new level of play. I have met so many amazing people from Warren Sixpack, and have made incredible relationships with my teammates. I am so grateful for the experiences SixPack has given me, as well as making me into the player I am today.

My parents inspire me. They have been really supportive and just want to make sure I am doing what makes me happy.

As of now, I am focusing on getting into schools and making sure where I go will help me succeed in my major. I will very likely play club in college.

Before Covid, I would try to find ways to play during my offseason. As well I took up hot yoga, which can sound so random with being beneficial to volleyball. In my experience with hot yoga, I felt my level of play was elevated as well as my focus on the court. During quarantine I took up running. I live near some trails, and found it really relaxing to get out of the house and go for runs.

Beach or Hard Court? Which do you like best?

Personally, I like hard courts when it comes to playing competitively. I have more practice playing on hard courts then I do on beach courts. I really started to play for fun on beach courts this last summer due to covid, and I loved it. Especially when playing at the beach, my favorite part is being able to jump in the ocean after diving all over the sand.

Before games my dad will play LL Cool J “Mama Said Knock You Out” for me in the car. He does this because it always makes me laugh and I go into my games in a good mood.

My favorite college player is former Penn State libero, Kendall White. Not only was Kendall an insane libero, her presence on the court was electric. She was always there hyping her teammates up even if she wasn’t on the court.

Every coach I have had, whether school or club related, has helped me become the player I am today and I am forever grateful for them. Fred Siegle has supported me and all his players on and off the court. As well, my high school coach, Coach Bogdan, has not only helped me as a player but has taught me a tremendous amount about leadership.