Young Star on the Sand, Ali Lubach Loves the Game of Volleyball 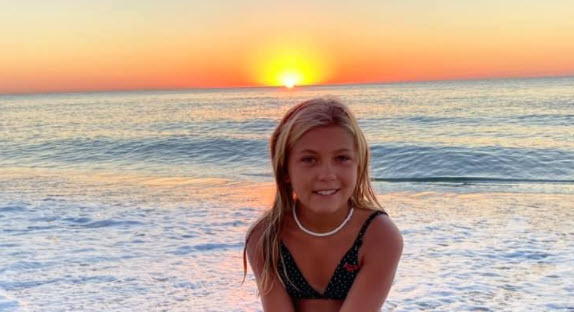 In our interaction with with most volleyball players over these past two years, it’s clear that most boys start playing the game as freshman in high school and the girls might get a bit faster start at the club level. It’s really few and far between that we see players start to develop under the age of 14. So when a young lady comes along with a big heart and big passion for the game, and she’s already been playing for a few years and is only in sixth grade, it’s time to take notice.

Ali Lubach, a current sixth grader from Brick, NJ, has been a fixture on the beach volleyball scene for the past two years. In the summer of 2019, Ali broke on to Point Pleasant Beach with her teammate Ashley Markle from Old Bridge, and won her first tournament, the AVP East Coast Junior Championship Qualifier in early June at 12U. Two weeks later, the 10 year old duo again took first place in the 12U Beach Club Series tournament. And as each week went by of the summer, Ali was consumed by a new found love that is just so evident when you watch her play. She brings a smile, an upbeat energy level, and a contagious positivity that reaches her teammates and pretty much anyone that sees her play.

Ali and her older brother Dan are a little over a year apart. Dan is a big time, power-hitting, baseball player and was part of the team that won the little league state championship for Brick this past Spring. Unfortunately, COVID killed any chances to go to Williamsport. But competitiveness is in the family blood.

Ali has a big presence despite being in a petite body. Her small frame is often misleading to opponents until the first point is played. Then there is a shift of thinking of figuring ways to get the ball down on the girl thats going to be all over the court with speed and quickness and much more strength than her appearance. In this case, her strength comes from her heart and will build as she gets older.

Lubach is not motivated by watching big time stars at the pro level or college level. She would rather just play. She takes her inspiration from her teammates and players she has interacted with at tournaments that go out of their way to share some advice. But she did reference Veronica and Victoria Corcoran the twin sisters from Demarest who won two state title, 4 sectional titles and went on to an amazing beach volleyball careers at University of New Orleans. Ali told us “They were both always very supportive and helpful to me, and they are also very good volleyball players”.

Her first inspiration for volleyball came on the shore line in Mexico. She was on a family trip and enjoying some beach time when she came across a beach player who took time to show her the ropes. It lighted a spark for Ali who tried indoor for one year and then switched to beach at SAS. Her Mom Christine gave us some insights on her tryout. Especially considering that Ali was on the beach court with much advanced players. “She was nervous and intimidated watching the seasoned players, big, older girls warming up. She timidly walked onto the court, but, she hit the sand running.  She killed it at tryouts, and made the team.”

After she started at Stars and Stripes, everything seemed to fall in place. She credits a large group of SAS coaches who have all influenced her accomplishments. “SAS has some great coaches including Mike Adams, John Bracco, Meghan Blair, Chris Wong, Scott Matuszewski, Tongsu Rivera, Greg Wood, Jeff Nelson, and Jess Fazekas. Then we have Aresio Souza who is our trainer.” But she also credits other players and teammates who mentor her. “Kate Stoughton definitely helps me a lot. Hannah Naja does not do Stars and Stripes anymore, but she is also very supportive. I think all of the players definitely give me tips, which helps me out a lot.”

For the older beach players that we reached out to, Ali represents the future of the game. They enjoy being given the chance to mentor her and see the potential she has to be an outstanding player in the years ahead. Kate Stoughton, the Brick Memorial junior who is considered one of the top young players in NJ, looks at Ali fondly. “A big thing that we try to implement at SAS is for the older girls to be leaders on and off the court. Because her and the others are the future of SAS, they know this and set great examples for even younger girls” Kate shared. She has nothing but great things to say about the young star…”Ali’s super hardworking. She is aggressive and I think that’s what makes her so successful is that she is always ready to take a chance. Her serve is wicked and she doesn’t let anything drop.” The Long Beach State beach volleyball commit continued…”She’s always on the sidelines cheering Ashleigh Adams and I on, and she keeps her cool on and off the court. If she keeps working hard, she’s gonna be great!”

High school senior Sydney Eckhardt, another outstanding beach player from Hunterdon Central who has already commited to Jacksonville University to play Beach volleyball talks about Lubach with admiration. “She might be small, but her personality is bigger than life – she’s super fun to be around and a very dedicated beach player. Love having her as a teammate!” Every Stars and Stripes player feels the team support from all ages of players in the club. But sometimes the teammate reference is actually literal. Yes, that’s right. But, how can an 18 year old and a twelve year old be on the same team? Well that’s the wonder of beach volleyball as certain tournaments combine all ages.

Kate Stoughton, 17, has played together with Ali in a GAV event this fall at the Woman’s A level. Ali has teamed with Barnegat Senior Veronica Tikhomirova several times at Woman’s A finishing as high as second and most recently at Woman’s AA just a couple weeks ago placing fifth. She has also played with Hannah Naja and Skyler Rizzo to name a few. According to Ali, “So I normally play with Ashley Markle, but this summer, one of my goals was to switch up and play with other players. I like to play in higher levels because I learn a lot about the game and it’s definitely a challenge!”

She continued…”They are all people that I feel comfortable with. They also teach me a lot about the game and push me harder. Although it’s a lot of pressure, it’s definitely worth it!” Ali’s Mom Christine shared “She rises to the challenge, playing in higher level divisions, 16’s and 18’s, Women’s A and she just played in her first Women’s AA tournament last weekend. She literally turned 12 on the volleyball court playing into the wee hours of her birthday playing Women’s AA with Veronica T in the Last Hoorah Tournament at the Highline. Following a 2&1/2 hour practice, the tournament play started around 9:30PM, and, for Ali and Veronica, ended in playoffs around 4:30AM!” Pure dedication.

CHECK OUT THIS VIDEO OF ALI BELOW

Tikhomirova brags about Ali as well. “Ali is an amazing player not only for her age but among the older kids as well. I absolutely love playing with her because no matter what she will always try her best. I can’t wait to watch her when she is even older and see how much more amazing she becomes then she already is.” Veronica is an outstanding player, a senior at Barnegat, and is getting ready for her final high school season.

Ali has become great friends with Ashley Markle, her first beach teammate. Although they live almost an hour away from each other, they are the same age and have a special chemistry. Markle has about a foot height advantage on Lubach and has an equally bright future.

Ms. Lubach is still a few years away from high school but we are already imagining her on the hard court for her school team. A lot can happen in three years but she may be a future Brick Dragon or Brick Memorial Mustang? Or a Donovan Catholic Griffin or St. John Vianney Lancer? Which ever team secures her for 4 years of high school is certainly looking at a potential record setter, but far more important may be getting a player that can help build a team and make others players around her better. In the SAS tradition, someone who could look after the younger players and become a leader. And we all know what magic can happen then.

“If I go to a high school that has an indoor team, I will play. But I would still do beach.” Yes, the beach has laid it’s claim to young Ali’s heart. Remember her name now because you will be seeing it very often in the future.

And if this article can reach one player who can see themselves starting to play volleyball at a young age, either beach or hard court, it’s well worth it. But with the inspiration that Ali provides, the sky is the limit.

Many thanks Ali… one of our favorite interviews thus far… We will be ready for a follow up article once you hit high school!!