Emily VanHouten to Lead the Offense for Morris Hills Volleyball 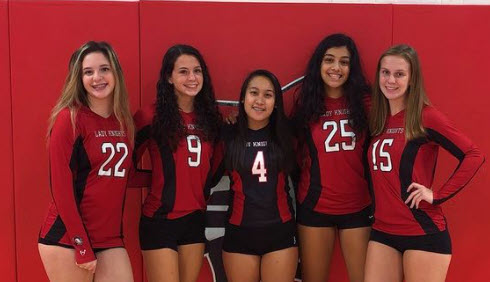 Following a 16-9 season in the NJAC and a first-round exit after being upset by Northern Burlington in the NJSIAA Group 3 Tournament, the Morris Hills Scarlet Knights are poised to redeem themselves this upcoming season. Senior outside-hitter Emily VanHouten will be the returning leading member of the offense, and she sat down with me to outline her background and what we can expect from her and the Morris Hills Scarlet Knights varsity girls volleyball team.

“My name is Emily VanHouten and I am a Senior at Morris Hills High School. My family is made up of my dad, my mom, my sister Meghan who is a freshman also at Morris Hills, and my dog Max. We’ve lived in Rockaway all my life,” VanHouten said.

Emily has played volleyball since the 6th grade, when she started playing for her town’s recreational Junior Knights program.

She said, “It’s been my favorite sport to play ever since. Fun fact—I was actually a setter all of middle school. I was not an outside-hitter until I got into high school.  Last winter, I decided to quit basketball (very tough decision, I’ve been playing since 2nd grade) to play club volleyball at Xtreme, and it was the best choice I’ve ever made; I love this sport so much.”

VanHouten stands 5’7” but can touch the sky with a 30” vertical.

“I am a very versatile player and can play outside, right side, and defensive specialist,” she added. “I love them all, but I would have to say that my favorite position is outside.”

Morris Hills will have to find players to fill the voids of two major Seniors from last season. Captains Daisy Nguyen and Emily Jackson combined for 228 kills and 411 digs for the Scarlet Knights in 2019.

“I think it’s evident that we lost huge components to our starting lineup from last year. Daisy Nguyen and Emily Jackson were both huge team players and had such a positive impact on the court. Although they have graduated, I believe that we have a lot of upcoming players that have a lot of talent and potential. I also think that we have a solid base of Seniors this year that have been playing together for a bit of time now,” Emily said, “I see so much potential for our team this year and I hope to get to have a season with them. I’m sure there will be bumps in the road, every team experiences them, but I know we will succeed because of how positive and hard working this group is.”

Morris Hills definitely will need to find players to fill the shoes of Seniors that graduated at the conclusion of last season. VanHouten said, “I am looking forward to seeing what our returning setters, Druhi Bhargava and Ryan Grow, will be able to do this year. I know last year we were short on setters, but I am so confident in them and what they will bring to the table this year.” The Senior also added that she is excited to see Jackie Newton at the MB/RS position. “I have been working with her [Newton] at Xtreme on the same national team, and I can confidently say we have both improved tremendously with the help of Xtreme’s coaching,” Emily said. It remains to be seen how the Morris Hills coaching staff fills the libero position, after the departure of Daisy Nguyen.

Emily VanHouten is the team’s leader in kills, and it appears that she will be the focus of the offensive attack for the Scarlet Knights. She said, “I am much more confident in my swing now than I was a year ago; the work I’ve put in over the last year is evident.” VanHouten credits the coaching staff at Xtreme Volleyball Academy for breaking down her swing and making small adjustments that made a huge difference. “Watching the differences between my approach/swing from the 2019 high school season vs. my approach/swing from this summer from recent films blows my mind. I am really looking forward to seeing what I can accomplish on the offensive attack,” she added.

“Last season, my two coaches were Cindy Rivera and Allison Regan. The impact that the two of them have had on my skills and training is unbelievable. Last year was my first year playing at a club level, and although my season was cut short due to COVID, they were still able to help me improve tremendously in just 4-5 months,” Emily said, “My coaches at Xtreme are definitely the best coaches I have ever had, in all of my years of sports. Throughout my life I have played soccer, basketball, softball, and track & field, and I can confidently say I have never experienced coaching like theirs. They will not beat around the bush about anything; they will tell you what you need to know and what you  need to improve on, yet they have such a soft and comforting approach to it. My only regret in regards to club volleyball was that I did not start sooner.”

“I can confidently say that Lasell is the perfect fit for me—I would get the attention I need, both in the classroom and on the court,” she added, “The campus is beautiful, and it is right outside of the center of Boston. I will get the small town/‘homey’ feel I’ve always wanted for college, as well as Boston’s amazing opportunities. The volleyball program has struggled in the past, but with a new head coach and strong recruitments for the upcoming season, I know we will be set up for success. I am so excited to be part of the rebuilding process and watching the team grow over the next four years.”

It says a lot about a player who knows they are going to be playing during a program rebuild. VanHouten seems poised to be a leader both on and off the court at Lasell University and we will track her progress over the years.

VanHouten looks up to former USC volleyball player Victoria Garrick. Garrick was a libero and is currently a mental health advocate and is very active on social media.

“I did not watch her [Garrick] much on the court. Her impact on athletes off the court is what really caught my attention,” she continued, “Victoria uses her large social media platforms such as Instagram and TikTok to spread positivity and awareness on topics such as body positivity and mental health as an athlete. These are two very important topics that go unnoticed and aren’t talked about much in the sports field. They both affect our confidence and our mental game on the court, and I’m glad she uses her platforms to raise awareness about them.”

It will be very interesting to see how Morris Hills competes in the National division of the NJAC, and VanHouten will surely be a force for the Scarlet Knights in Rockaway.