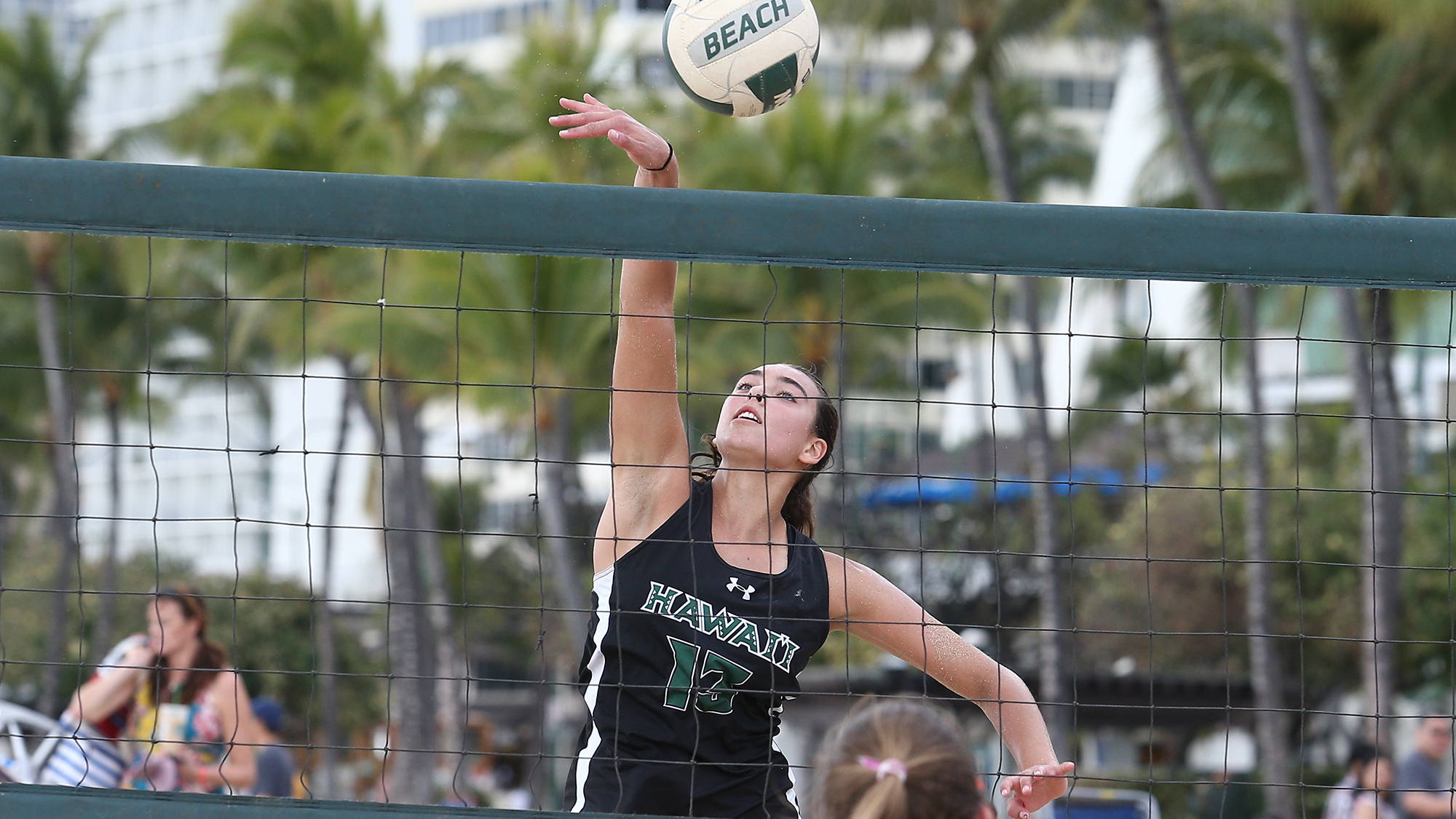 Sofia Russo has one of those American dream stories. She set her sights in high school on playing beach volleyball for Hawaii, a goal that came to fruition two years ago. This achievement has allowed her to see the world and play the game that she loves while getting an amazing education in one of the most beautiful parts of the universe.

Sofia graduated from Cherry Hill West high school in 2018 as class valedictorian. She was a powerful force for the Lions and used her 6’0″ frame to lead her team in kills and aces as a junior. She played with her older sister Lina at CHW and the pair had dreams of playing volleyball in college. Lina is also playing beach volleyball in college, at St. Leo’s in Florida.

Sofia was an impact freshman for the Rainbow Warriors playing in 30 matches. She went 18-12 with a variety of teammates and was awarded All-Big West honorable mention for her performances. She won the final match that lead UH to a 3-2 win over #14 LMU that propelled them to their first Foundation Queen’s Cup Title. She also captured the clinching win in the NCAA tournament victory of #8 Stetson.

Russo had these accomplishments while balancing her academics. As a freshman she was named to the Big West Commissioner’s Honor Roll and as a sophomore she earned a University of Hawaii Scholar Athlete Award.

Sofia is an amazing role model for our younger players who have dealt with adversity during these COVID times. Don’t let these tougher times squelch your ability to dream. You can still accomplish whatever you set your mind to do. Using one of the main quotes we use on our website… “Whether you think you can, or think you can’t… you are right!” Sofia has always believed in herself. And with that mindset, you can accomplish anything.

Here is our interview with Ms. Russo…

Tell us a bit about yourself, Sofia?

I am in my junior year at University of Hawaii. I graduate in 2022. My parents both played volleyball and my sister is currently playing at St. Leo University.

I have been playing volleyball since I was 14. My parents both played and I would go to their games when I was growing up so I have always wanted to play too.

What made you choose beach over the hard court for your college athletics?

I enjoyed beach more than indoor. It is fun to have more control over every play.

Did you consider other college options before choosing Hawaii? What was the deciding factor in choosing to be a Rainbow Warrior?

University of Hawaii was my dream school when I started looking to play in college so I decided to go there as soon as they said I could. They are the only school that offered me a spot too.

Tell us about your transition from going to high school in NJ to starting your freshman year on the beach in Manoa.

I loved that college was only a few hours of school a day compared to 8 hours of highschool. It was great to get to practice every single day. Hawaii is a really beautiful place. There is so much to do and see so it was very exciting.

What are you studying in college or what is your career path?

I am majoring in physics and minoring in philosophy.

Grades are important for getting recruited. If a school is considering multiple people with a similar skill level, grades could be the deciding factor. Being coachable is another quality that is very important to coaches.

Having a sister that also plays NCAA beach volleyball is truly unique despite the Corcoran sisters at University of New Orleans who are also from NJ. Tell us about the relationship with your sister Lina and how you chose to attend different colleges.

Me and Lina are very close and we train together when we are both home from school. Lina wanted to go somewhere warm that is still close to home so she chose Florida. She got a good academic scholarship to go to St. Leo since she had already completed an Associates Degree at a community college. She is studying biomed engineering there.

Is there a teacher or coach who really helped you along the way that you would like to recognize here?

Quan from Quandomania, Brocco from SAS, and all the coaches at CHVBC.

What is your favorite inspirational video or music that you like to watch or listen to before games? Would you like to add to the NJP Spotify playlist?

My mom, my dad, my sister, and all my volleyball friends from GAV.

April Ross, Melissa Humana-Paredes, and Sarah Pavan. They are the best at beach volleyball and also good people, so they are great examples to look up to.