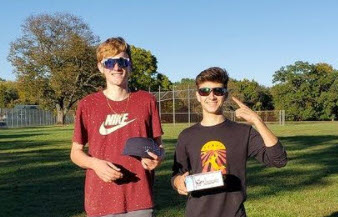 Many New Jersey student athletes are brought up playing all of the traditional sports at home. As they get older, little league baseball is a popular option for boys, as is pop warner football. For some kids like Patrick Rogers, he gravitated to baseball and basketball and he was soon recognized as an exceptional athlete.

Rogers is a competitor. He has to be in the Rogers family. Patrick, the youngest of three, has two older sisters that were exceptional athletes as well. And there always seemed to be a volleyball in the house or on the beach during summer vacations. So peppering with his older sisters was common place but never a real thought for a kid that was immersed in, and excelling, at more traditional sports.

And we are being very modest when we said Patrick’s sisters were exceptional athletes. His oldest sister Jessica was a record breaker at Rutherford. No one at Rutherford has ever had over 1,000 points at basketball as well as a 1,000 kills at volleyball. But Jess changed that in 2015 and put up the most kills in Rutherford school history at 1,183. She is currently a grad student playing D1 basketball for the Iona Gaels after playing and graduating at the University of Rhode Island. Follow her progress at this link: https://icgaels.com/sports/womens-basketball/roster/jessica-rogers/5719

His sister Jenna was the NJ High School Volleyball Player of the Year in 2019 in volleyball. She had a simply amazing 4-year volleyball career at Rutherford shattering her sisters all-time kill record with 1,432. Despite her incredible skills at volleyball, she was even better at track and field events and decided to attend the University of Nebraska as one of the best high jumpers in the country this past fall. You can track her progress here at this link: https://huskers.com/sports/mens-track-and-field/roster/jenna-rogers/42547

“I watched them both play and succeed when I was younger and thought I can do that myself” Patrick shared in regard to his high profile sisters. He is also a realist and understands how tough the journey can be. “It takes a lot of failure to succeed. I have witnessed that over the years with my sisters”. Preserverance and hard work are often the best ingredients in success.

So Patrick has the pedigree in the family, fueled by both his Mom and Dad being athletes. His 6’1″ Mom, Lori, was a volleyball player at Southwest Minnesota State and his 6’6″ Dad, Dennis, played basketball at TCNJ. Patrick is 6’6″ and still growing. He has natural ability on the volleyball court that stretches far beyond most kids who start to pick up the game as high school freshmen. His roots of being blasted by his older sisters in the backyard have left its mark in his development and a comfort level for passing, hitting, and digging that most current boys players can’t compete with.

Patrick is just impressive. After being the lone 16 year old on the SideOut Sports 18-1 club team last season, he moved on to Warren Six Pack this year and is playing with all of the top 17 year olds in New Jersey. The 17-1 team at Six Pack has split it’s matches so far this year with the 18-1 team at Six Pack, which is traditionally the best club team in the state. His current teammates include Chris Lynum (Livingston), Nick Brzoska (Marlboro), Michael Weikum and John Toolan (St. Joe’s Metuchen), Andrew Sasso (CBA), David Flores and Brian Snook (Old Bridge) and Chris Mitchell (Howell). All studs from our perspective.

The addition of Rogers to the Six Pack team gives them another dimension and competitive edge. Patrick has a massive wingspan and large hands that allow him to put up a perilous block. He anticipates well and has solid instincts. He also has a strong power serve that he mixes in with his float. His attack is swift and powerful as he leverages his arm length to provide high velocity hits.

Rogers also excels on the basketball court. As a sophomore, Patrick lead the Bulldogs in points with 440, rebounds with 236, and games played with 28. He also popped in 30 three-pointers and led the team with 51 free throws. The Buldogs went 16-12, qualified for the state tourney and made it to the Section 2 quarter-finals.

But a big disappointment for NJ volleyball fans is we can’t see Patrick play at the high school level. Rutherford, known for their powerhouse state sectional championship teams at girls volleyball does not field a boys team. There is absolutely no doubt that Patrick would uplift any high school team roster in the state including some of the perennial powers. But it does not appear that he will get that chance. Patrick told us “I think eventually, Rutherford will have to add a boys team because it is becoming very popular. A lot of boys in my school wish they had a team”.

Many NJ players have excelled at the club level but do not have a high school with a boys volleyball programs. Some examples from last year are Andrew Guragno from Six Pack, Tim Flanagan from CJVA and Core’s Fabian Alvarado. The high school experience is like no other for sports like volleyball. Boy’s volleyball has grown three times fast than any other high school sport over the past 5 years. We expect many more boys programs to be popping up in New Jersey. Currently, the school’s offering boys programs (140) pales in comparison to programs offered by the girls (318). NJP mission is focused on helping bridge that gap as well as increase girls programs as well.

Patrick will have ample opportunity to be seen by college coaches through the typical Six Pack exposure network. Patrick has also taken to the grass and beach over these past number of months as well so we expect his opportunities to be ample when it comes to college interest. “I like the beach better than the hard court” said Rogers. “I play almost every weekend at the shore during the summer and at HighLine Arena during the winter”.