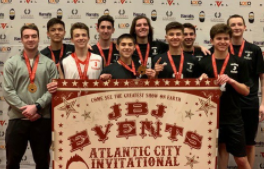 The NJ high school boys volleyball landscape is unkown abyss after the cancellation of the 2020 season. The Howell Rebels were at the time of their game in 2019 winning their first 11 games, in addition to their first 15 of 16, and making it to the shore conference tournament final. They were stacked with talent and had many solid juniors that would be stepping up for 2020. But with the season never happening, visibility into all the teams is just so hard to predict.

Looking at the Howell potential roster, we are confident that the Rebels will be well positioned to have a successful season. Chris Mitchell is one of the reasons that gives us that confidence. Chris has been playing on the Warren Six Pack club team for the past two years. This club season, he is a part of the 17-1 national team, representing the best in New Jersey at that age level.

Chris is a solid athlete. He can jump and put balls away from the middle position with force. He is a strong blocker as well and will solidify the front line for the Rebels. Pairing Chris with Jake George, a returning varsity player from 2018 and a Warren Six Pack 18-1 player, will establish a dynamic duo for Howell.

Mitchell’s club team has had several scrimmages already where they are facing top competition including the 18-1 team from their own club. Mitchell’s tournament experience will keep him well prepared for other teams at the Shore that expect to be at the top of the standings. Both Southern and CBA we project to have very strong squads this Spring.

Chris will be a player to watch during the upcoming Spring season. As will the Rebels as they look to continue their winning ways.

Here is our interview with Chris Mitchell…

Tell us a bit about yourself, Chris?

I am in the class of 2022 at Howell High School. My parents always support me and go to every single one of my games. They always put my schedule in front of theirs for which I am very thankful. I have a twin brother, Will, with whom I always hang out whether it be playing video games or playing basketball in the driveway, though I wish he loved volleyball as much as I do so I could have an at-home pepper partner.

I started playing volleyball during freshman year, and I was inspired to do so because I always loved to play it in gym class during middle school. I thought that if it was fun in gym class, I could only imagine how fun real, competitive volleyball must be. I had also previously heard of coach Perri and knew that he was a great mentor, so I definitely wanted to learn from him.

I am a 6’2 Middle Blocker for Warren Six Pack 17-1, which is on the shorter side for that position, but that motivates me to work harder. Though I play middle, I enjoy playing libero and I’m also pretty nice at it which my teammates can totally vouch for.

Who do you expect will be Howell’s standout and up and coming players this Spring?

I expect Jake George of Warren Six Pack 18-1 to become a standout leader on the team. He is always there for his teammates and is a great player with a powerful swing. I also think Pat Mullen of Warren Six Pack 16-1 and Howell libero Jaden Coward will have a breakout season.

What is your expectation for this year’s Howell squad? Who are you targeting as the top teams to beat at the shore?

I expect this year’s Howell squad to have a good placement in the shore conference because most of the roster has club experience and has been playing volleyball and improving safely all year. Our grind, despite the adversities COVID has created, shows the dedicated work ethic of my team. We definitely look to beat CBA again. During my freshman year, the Howell varsity team ended a losing streak against CBA which they held for many years. We plan to convert that into our own winning streak against them.

How did the cancellation of the Spring high school season affect your team?

It was difficult for us as it probably was for many high school teams. Being stripped of the thing you look forward to and have been working for all year is devastating. It took away valuable time for players like myself who want to further develop their skills and play beyond high school. For us, that time off was motivation to improve and we hope to come back stronger than ever.

It would be a blessing to play in college and I certainly hope I will be able to. I am looking at any schools both in the U.S. and Canada that fit my educational goals as well as my goals as a volleyball player.

In college, I might like to pursue sports broadcasting. I love to be around sports in a competitive environment, and I believe broadcasting would allow me to enjoy the sports in my life as well as bring out my enthusiasm and character as a person.

Tell us about your club volleyball experience at Six Pack?

I was first introduced to Six Pack by my coaches and teammates at Howell. They encouraged me to play and I almost declined the opportunity, but I’m more than glad I didn’t. I have met so many players with the same mindset and desire for growth and victory. We all push each other to work hard every practice so we can continue to dominate at tournaments. My coaches drive my team and I to success by teaching from their own high-level experiences as players. The team dynamic is a perfect fit for me because now, they are my friends more than they are my teammates, which makes competing with them at my side all the more enjoyable.

What is your favorite volleyball story to tell about your tournaments with Six Pack?

It is not necessarily a volleyball story, but something from my team that I’ll remember for quite a long time, was when we had just finished playing at the Atlantic Northeastern tournament in Harrisburg. We all met up at Texas Roadhouse (if I recall correctly) to celebrate, and we were all enjoying ourselves. It was my setter David Flores’ birthday and out of nowhere all of the staff members came to our table singing and made Dave put on a cowboy hat and ride a bull dummy. He had to sit there for like 30 seconds straight of them singing and though it must have been awkward for him, it was hilarious for everyone else. Sorry Dave 🙂

How are you and your family dealing with the current world situation with COVID-19?

Luckily, all of us were able to keep our jobs and have been able to stay healthy and safe while working and going out for essentials. We are very fortunate and grateful and continue to practice safe precautions.

Before every game, I listen to My Time by Fabolous ft. Jeremih. My dad used to coach basketball at Central Regional High School and that was one of their warm-up songs. I played it to mess with him one day, but ever since then it’s become a pre-game ritual we look forward to each game day.

My favorite player is Josh Tuaniga because he is very creative and calm under pressure. He is very fundamentally skilled which contributes to his consistency, and he can make something out of nothing if a play is going south. He’s not only a great setter, but a great all-around volleyball player which makes him such a versatile threat.