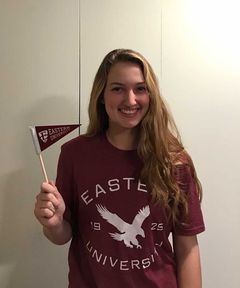 Just a couple of weeks ago, Rachel Curran of Mountain Lakes High School announced her decision to attend Eastern University and will play volleyball.

“I chose Eastern University because of everything it has to offer. I wanted a smaller school with a good program for studying Business and a competitive D-III volleyball team,” Curran said, “Eastern is a nationally-recognized Christian university located in Saint Davids, PA—about 13 miles west of Philadelphia. It has a safe community feel and 75% of students live on campus. The campus is beautiful, as it used to be an estate, also with multiple ponds and nature around every corner.”

Curran plays her club volleyball at Garden State Elite Volleyball Club and has only been playing at the club level since age 16.

She mentioned, “I always grew up around the sport because both of my parents played, but they never pushed me to play only volleyball. With that being said, I started off playing soccer when I was in elementary school and then added a bunch of other sports throughout middle school including: tennis, softball, swimming, basketball, track, and lacrosse. After my decision to discontinue playing all of these sports, along with basketball being the biggest compromise, I knew my heart was with volleyball.”

Rachel Curran has high praise for her GSEVC, including her coach Khaled El Shamy.

“Playing for Coach Khaled at Garden State Elite Volleyball Club has been such an amazing experience. I have traveled to a bunch of new and exciting places with my 17 Premier team and that group of girls are some of my very best friends; that is part of the reason why I really enjoy playing at GSE. Also, I want to thank Coach Khaled for everything he has done for me from the bottom of my heart,” Curran said.

When Rachel Curran was in 8th grade, she found out that Mountain Lakes High School did not have a girl’s volleyball team. She was “absolutely devastated” though in her freshman year she helped launch the brand new MLHS Girls Volleyball program.

“The volleyball program became the school’s first-ever club volleyball team. Then the following year, in 2018, is when the program became a full-fledged Varsity team. The girls on my high school team are some of the most amazing people I have ever met. They are humble and always strive to play their best. Even though many of them had only started playing their freshman year, we have come so far as a program. In 2018, our record was 5-14 and that is pretty good for a first year Varsity team, if I can say so,” she said, “This couldn’t have been possible without our incredible coaches, head Coach Linda Lentz, JV Coach Jodi Vitolo, and last but most certainly not least, Volunteer Assistant Coach Bob Curran. And yes, Coach Bob is my Dad. These three people have made the MLGV program into something great, and not just the volleyball aspect, but also the fact that MLGV is a team of hardworking and caring people that want the best for each other.”

Curran intended to play basketball in college, so she played in an AAU program. During her junior year at MLHS, she discovered that her true passion was volleyball, so she decided to join the GSE family and play club volleyball.

“My junior year was great. I was traveling all over stateside and emailing coaches asking them to come watch me play,” Curran added, “Eventually, I was getting responses and being looked at by a bunch of different schools. I was communicating with about 7 schools throughout the year 2020.”

Right after Thanksgiving, around the beginning of December of 2020 she received a text from the Eastern University assistant Coach, Harry Bitzberger, saying he was interested in her as a player.

“We had the introductory call, and after it [the call] something felt really right about this school. I researched the university and became very intrigued with everything it had to offer. I submitted an application, and the volleyball recruiting questionnaire. A couple weeks went by because at this time everyone was on winter break. During break, I had a phone call with the head Coach, Mark Birtwistle, and that call was so amazing,” she said, “The day after I got back to school, I received an acceptance email congratulating me on getting in. I texted Coach Birtwistle about a time to visit the school and finally landed on the date of Tuesday, January 19th because that was when the students were back on campus and I wanted to see it with as much normalcy as I could. The tour was awesome and made me want to join the EUVB family even more. So, two days later I made my final decision and verbally committed to continue my academic studies and volleyball career at Eastern University.”

Curran is most excited about the girls in the volleyball program and becoming best friends with all of them, while playing for Coach Birtwistle and Coach Bitzberger.

An added bonus is that she gets to travel locally and around the states in the surrounding area to complete.

Rachel Curran plans to study Business in some capacity. She will be exploring all of her options when it comes to ultimately deciding which facet of Business she will delve into.

The Mountain Lakes and GSE outside hitter has some advice for players aspiring to play at the collegiate level.

“Follow your heart, but take your brain with you. If a decision doesn’t sit right with you, go back, rethink it, and change your mind. Also, if something doesn’t work out even if you really wanted it to, it’s going to be okay. An even better opportunity is in store for you. I believe that everything really does happen for a reason,” she said.