Drew McNellis Is A Big Presence For Williamstown Braves 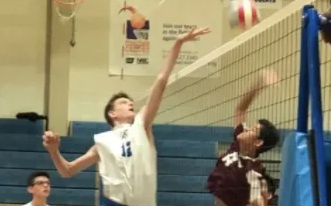 A young player with size, strength, and athleticism. Sounds like something that would be on every volleyball coaches wish list. 6’5″ Drew McNellis will be anchoring the Braves middle come the Spring season. And NJP expects a major breakout season for a young man that has a huge upside potential.

Drew, like many attacking volleyball players, played basketball as well for Dubtown. He has turned away many offensive chances from opponents on both the basketball and volleyball courts. But now all of Drew’s attention is on volleyball as he follows his passion to play at the collegiate level. Drew’s video clip of a monster block almost won the NJP clip of the year contest, but he was nipped by senior Chris Larkin’s of St. Peter’s Prep power bomb of a kill while playing for Warren Six Pack. Not bad for a freshman.

McNellis is currently playing for the EVA 18 team as a junior. He has continued developing his skills at the club level and will have two high school seasons to show off his improvements. Williamstown slipped into the NJP pre-season projected top 25 best teams and the Braves will count him to have a big campaign to stay near the top in the South.

McNellis is a volunteer junior fireman currently and aspires to have a full time role at the Williamstown Fire Department when he completes college. You have to take your hat off to a young man who wants to face danger every day to help save the lives of others. Drew will have a chance to shine in the future with this path but first he will get to be a hero on the volleyball court for a Braves team (a fitting mascot) that will be on the rise in 2021.

Here is our interview with Drew…

Tell us a bit about yourself, Drew?

My name is Drew McNellis. I attend Williamstown High School, in Williamstown Nj. I graduate in the class of 2022. My Mother works for the Monroe Township Public School System and my Father is a salesman. I have two brothers Grant and Jake; Grant attends and plays basketball at RCGC, and my other brother Jake who also played Volleyball at Williamstown High School attended Stockton.

I started out playing volleyball for the first time my freshman year. My brother Jake was my first real inspiration to take up volleyball. My coach Mark Avery and David Bocchi also were a big influence on me to come out and play.

As of now the club team I play for is called EVA Boys 18. I play middle blocker, and I am 6’5. My most favorite position to play is middle, but I like to play back side as well.

Who do you expect will be Williamstown’s standout and up and coming players this Spring?

I see myself; Lorenzo Bonomo, Nick Renzi, and Osco Williams as Williamstowns stand out and upcoming players this spring.

What is your expectation for this year’s Braves squad? Who are you targeting as the top teams to beat in your conference?

I think we really lost out on a great group of guys last year, but that is not going to stop us this year. I feel as though all the players have been working on their game and haven’t been using the pandemic as an excuse not to work whether it’s at home or at open gyms/practices. I feel that we ready for this season. We are targeting Washington Township, Kingsway, Clearview and Southern as the top teams to beat in our conference.

I plan to become a fireman after college. But I would like to go to college for entrepreneurship.

Tell us about your club volleyball experience at EVA?

I have had a great experience playing for EVA. Although we could not get many tournaments, every player came ready to work when it came time to practice and play. Playing for EVA has helped me tremendously and has taught me a lot about volleyball.

You are playing with many of the best high school volleyball players in South Jersey on the EVA 18-1. And you are just a junior. How have tourney’s and scrimmages gone so far?

We haven’t had that many tournaments, but our scrimmages and tournaments that we have had have gone great. We work good together and I’m looking forward to hopefully playing in more tournaments with this team in the future.

Surfing and hanging with friends.

I am a Volunteer Junior Fireman at the Williamstown Fire Department.

Firefighter’s Creed – When I’m called to duty God. wherever flames may rage. give me strength to save a life. whatever be its age.