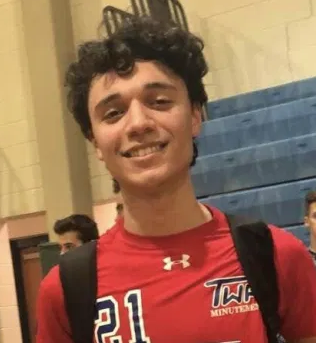 Washington Township played their part in a movie-like season during Barbara McBrearty’s last year as head coach of the Minuteman after 23 years on the hard court. Capturing County Championships for both the girls and boys programs in her last year before retirement is the stuff dreams are made of. A fitting ending for a storied career. The boys notched a 24-4 record in 2019. As Coach was leaving, two young sophomores, setter Tyler Jones and Outside Hitter Anthony Trivers, were just getting their careers started. Both players will be on the floor this Spring as seniors trying to keep the momentum rolling after a COVID cancelled season in 2020.

Trivers made the best of his opportunities on a senior-laden team that was packed with talent. He notched 51 kills in a limited role as an underclassman, but this Spring, it will be a whole new ballgame as the senior will be ready to lead.

Trivers and Jones will be the only two returning varsity players from the 2019 squad that was so succesful. But they form a solid base as Trivers will no doubt assume the role of six rotation outside along side Jones who notched almost 700 assists as a soph.

Anthony is passionate about volleyball. He has committed to play at the collegiate level for the NJCU Gothic Knights, a rising D3 program in New Jersey that is getting a major facelift in downtown Jersey City. The rejuvenated campus has a robust construction plan on property that leads from the JFK Boulevard main campus stretching down to the water, with new dorms and facilities under construction. Anthony will reap the benefit of the new educational facilities as well as contribute to a fast climbing volleyball program for both men and women.

Trivers is a smooth operator. He has great jumping ability and a swift and well time swing. He is technically sound, has solid instincts, and above average quickness. He has also trained in mixed martial arts for since early grammar school age and exudes confidence and discipline on the volleyball court.

NJP projects Washington Township in the top 20 in its preseason rankings. We expect Anthony to have a true breakout season for the Minutemen and provide the leadership necessary to guide his team back to the County finals.

Here is our interview with Anthony Trivers…

Tell us a bit about yourself, Anthony?

I am currently a senior at Washington Township High School. I am in the class of 2021 and live in Washington Township. Living with an older brother, competition was huge in the family. No matter what it was we would compete against each other just to make either our chores, or sports more fun. This drove not only my competitive attitude for volleyball, but all sports in general.

I have been playing volleyball starting freshman year in spring. I was supposed to take a makeup test, and since my teacher had to reschedule for another day, my friend insisted that I try out for volleyball instead of just sitting around. All my paperwork for basketball were complete earlier that year, so I decided why not and what’s the worst that could happen. That one decision is what changed my athletic life all throughout high school.

6’ 1”, 32’’ vertical, outside hitter, quandomania, favorite position is outside or setter.

Tell us about your Patriot teammates. Who do you expect will be this year’s standout and up and coming players?

I feel that this year our team will have an amazing season due to the senior players that I have played with for a while whether it was from previous years or practicing at the gyms. Almost all of our lineup consist of previous teammates from past years, along with our setter being a club teammate.

It’s really a shame that we will not have as many games as our 2018-19 season, but I feel we will definitely have the same, if not better chemistry, and overall hopefully get conference champs for the second year in a row.

You and setter Tyler Jones (who had 677 assists) are the only returning players form the 2018-2019 varsity team. Will it be hard to rebuild after the cancelled season last year?

I feel that it wont be as hard as expected due to our other players working hard, seeing them in the gym, and knowing that they want to keep our winning record takes hard work which I feel they have been doing.

Township was on a roll making it to the sectional semi-final during your sophomore year. How did the cancellation of the Spring high school season effect your team?

The cancellation was hard on us due to losing almost half the team since they were incoming seniors, and the team over all knew we were going to keep the record we had the previous year and even have a better chance to win in the finals.

Yes. I am planning on attending New Jersey City University to continue my volleyball career.

I am planning on majoring in Biology and hopefully complete med school to pursue my dream as an anesthesiologist, or clinical scientist.

Tell us about your club volleyball experience at Quandomania?

My sophomore year was the only year I was able to fully experience tournaments, and all practices and only wish I started earlier due to the huge difference of competition, and it helped me get a lot more not only experience, but knowledge about the game.

My high school coach Mrs. McBrearty really has helped me achieve the love for volleyball that I have today. She helped me get better on the court and made me apart of the varsity team as a sophomore due to the progress I achieved.

I currently go to the gym for self-workouts along with my brother, and for the past 8 years Ive been doing MMA which I am currently a first degree black belt in.

My parents along with my brother are without a doubt my biggest supporters. Many times, when I was either too tired, sore, or didn’t want to go, they were the ones to push me to show up on my bad days where there was no motivation. I can’t name one game where both my parents weren’t there. Whether it is taking off work, or driving 5 hours for tournaments (club), they always are the people I can count on whether its on or off the court.

I am a huge nerd when it comes to music and have been playing guitar for about 5 years now. Whether its rock and roll, indie, or jazz, I love playing music. I even preform at the boardwalk in the summer.