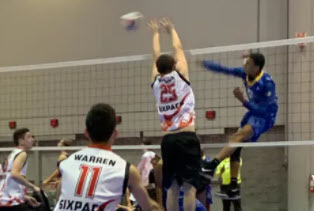 The St. Joe’s Metuchen Falcons are one of New Jersey dominant teams over the past decade. Head Coach Miguel Cabrita’s squad is always deep with talent and no matter what the circumstances, even with a pandemic, we expect the Falcons to be top notch.

You can’t talk about St. Joe’s without referencing Christian Trevino the outstanding outside hitter that is a senior and has committed to play D1 college volleyball with New Jersey Institute of Technology. The Falcons have two other top club players on their team, both juniors and teammates on the Warren Six Pack 17-1 team this winter. Michael Weikum and John Toolan have settled in on arguably the best club team in the state at the 17 level.

John Toolan is a 6’4″ middle and has played on the top club team for his age level these past two years. We expect John will be in a great position to have a breakout year this Spring. St. Joe’s will be a top team and we expect him to get regular rotations up front. John is super on the block and we expect him to contribute both offensively and defensively for the Falcons.

Toolan has the best of both worlds right now and should be in for a great next two years on very strong teams both at the club and high school levels. John has the potential to be one of the top recruits at the middle position for a collegiate career on the hard court as a senior next year, if he so chooses.

Here is our interview with John Toolan…

Tell us a bit about yourself, John?

My name is John Toolan and I am a junior at St. Joseph High School in Metuchen. I live in Branchburg with my older brother and my parents. I also have two sisters but they’re in their 20’s so they’re living on their own. I enjoy video games, movies, and writing.

I have played volleyball since freshman year of high school and at first I didn’t really want to play volleyball, but my brother who was on the varsity team for St. Joe’s convinced me and I’ve loved it ever since.

I am 6’4, so it’s no surprise that I play middle. I play for Six Pack and my favorite position to play is middle or back row even though I’m not that good at it. It’s just fun playing a position that I never play in game.

Tell us about your club volleyball experience at Six Pack?

I love Six Pack. It is such a positive environment and the coaches are really helpful. I’ve gotten a lot better because of Six Pack and playing with the team at tournaments is a ton of fun.

Tell us about your legendary Coach at St. Joe’s Miguel Cabrita?

It’s pretty funny to me how different Mr. Cabrita and Coach Cabrita are. Mr. Cabrita is a faculty member at St. Joe’s who is super nice to everyone, says hello to you in the hall, makes the freshman feel really comfortable, while Coach Cabrita is the serious, determined, kind of scary coach and who is all about volleyball and takes it very seriously.

Who do you expect will be St. Joe’s standout and up and coming players this Spring?

Definitely Christian Trevino and Michael Weikum, I have seen them working hard at their craft and I’ve especially seen Mike’s progress while playing with him on the same club team, he’s going to do really well.

What is your expectation for this year’s Falcon squad? Who are you targeting as the top teams to beat?

I think we’ll do very well this season and I know everyone is excited to be back. I’m hoping to see and beat Old Bridge, CBA, and Bridgewater Raritan, along with others.

How did the cancellation of the Spring high school season effect your team?

It was a bummer, sure, but I think it’s a good thing because a lack of a season last year makes this next one all the better and all the more important.

I haven’t decided yet if I’ll play in College. I think that decision will come a little farther down the road. My career path is something I’m still trying to figure out. I am hoping to do so in College.

What is your favorite volleyball story to tell about your tournaments with Six Pack?

One time at a restaurant in Orlando, we told the waitress it was my teammates birthday and we got a free desert and they played a video of our table on the big screen they had in the middle of the restaurant.