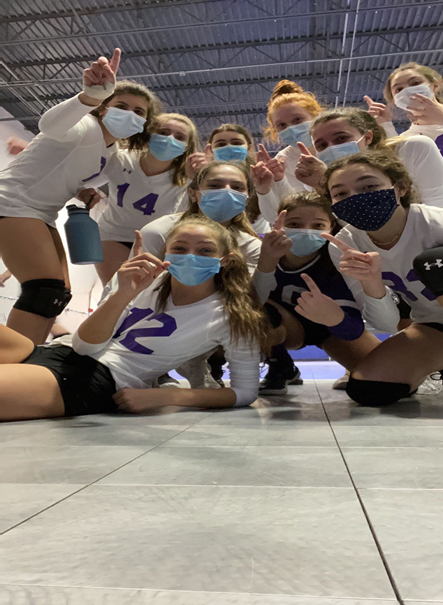 Katie Brokes emerged last year as an impact freshman for the Governor Livingston Highlanders. She secured a starting role in her first year on a very good team that finished 16-6, advanced to the Union County semi-finals and got three rounds deep into the state playoff grid.

The Highlander team for Spring 2021 is projected to be in the Top 20 in NJP’s Preseason rankings. They lose just two seniors and return almost all of their varsity starters from last season.

With Katie on the back row, strong hitters such as seniors Leah Dooley and Ashley Parker at outside and Olivia Teska at setter, and other quality youth such as juniors Brooke Gyory at middle blocker and Abby Periera at opposite hitter, the squad will be top-flight.

Katie has the grit and determination to be a real leader on the Highlanders for years to come. She is a spirited and acrobatic dig machine that is extremely quick to the ball. She will sacrifice her body to get to balls that seem unreachable. And strong hands to pass those dimes. Despite being just a sophomore, Katie plays like a senior.

The sky is the limit for both Katie and the Highlanders this Spring. The shortened schedule could work to the advantage of the very talented teams and GL is favored to meet Union Catholic in Counties as both are top 20 teams. With an even playing field of games played, Katie is expected to be near the top in the state in digs, which for a sophomore, is just outstanding.

Here is our interview with Ms. Brokes.

Tell us a bit about yourself, Katie?

My name is Katie Brokes. I attend Governor Livingston High School. I will be graduating as part of the Class of 2023. I have lived in Berkeley Heights, NJ for my whole life. I live with my mom, dad, and 2 dogs named Tizzy and Skippy.

I am currently in my fifth season of playing club volleyball. My dad is my inspiration for playing volleyball. He was the one that had introduced me to the sport and has since been my biggest supporter when it comes to the game.  He had been playing volleyball since his teenage years. In addition he had coached at the University of Scranton as a student coach and he also coached at Stevens University in Hoboken, NJ.

I am a 5’4 libero. I am playing with Sideout Sports and I have enjoyed every minute there. Being a libero has always been my favorite position because I love to be all over the floor digging balls that no one expects to be dug.

Tell us about your Highlander teammates. Who do you expect will be this year’s standout and up and coming players?

I am beyond blessed to be able to share the court with some of the most energetic, kind, and athletic girls that I have ever met. I am certain that seniors Leah Dooley and Ashley Parker will continue to be powerhouse hitters. I also think that junior Abigail Periera will have a great season this year because she has put in so much work and has been growing at a very fast pace.

NJP considers you as one of the top players in the state in your age group. Are you already considering your college choices? What do you plan to study in college or what is your career path?

I am considering my college choices. I am hoping to be able to play in college to continue my love for the sport. I am mainly looking into schools that have exercise science or Pre-PT programs as I  am hoping to become a physical therapist someday!

Tell us about your volleyball club experience?

I am currently at Sideout Sports. I have had a few great seasons with some amazing clubs before, and I have found that Sideout has become a great fit for me this year. I have grown faster than I felt I ever been have and I have really been pushed to become the strongest player that I can be.

You had a such a solid freshman season at GL on a very good team that went 16-6. What are your goals for the remainder of your high school career?

My goal is to make the All-Conference list by the time that I finish high school. In addition, I also want to make the most out of every opportunity that I am given in high school, this can be as small as getting a rep in, or as large as being invited to a college. My high school team being as strong as they are, has given me the chance to be able to grow at a rapid rate and I am looking forward to growing with them.

You got into your first two state playoffs games and not only did well but lead your team in digs in both wins. Describe the feeling of playing your first state playoff of your career.

The feeling was surreal. I never thought that coming in as a freshman that I would be able to play against some of the best players in the state. It was such a privilege to play with and against such exceptional players. Digging some of these players’ hits was a challenge for me considering that most were older than me, but it was exhilarating. Every time I got a dig it brought a thrill to me that has driven me to get more.

My favorite volleyball story would be the time that I made varsity. In the summer and club season working up to it, I had worked restlessly to make this team. I knew my competition would be close and that I would have to prove myself more than everyone else because I was the youngest. When Coach told me I made it, it brought tears to my eyes to know that all my hard work has paid off. At the time I did not realize how fantastic it would be to achieve great things on varsity, but I was overwhelmed with joy knowing that I would be able to challenge myself even more to become the best athlete that I could be.

In addition to my dad, I was known for having my friends come and support me at my high school games. These were some of my closest friends and they would never miss a game. Nothing would fill me with more joy than when they would scream for me after I made a good play. It means so much to me to know that they support me following my dreams.

In my reflection of my volleyball career, I have come to find that I have only been blessed with coaches that make me love the game even more. However, my first thoughts were Coach Jeff Gogates (my current club coach), and Coach Dana Hilaire (Varsity Coach at GL.) Coach Jeff always brings humor and joy to practice, he has taught me to be the most energetic version of myself possible. He has taught me elements of the game that I never could have imagined and has helped me progress into a player that I am proud to be. Coach Dana will always have a special place in my heart because she believed in me and put me on the varsity team. She opened the door to a higher level of playing. She acknowledged how hard I worked in practice and even had me playing the whole time for the state playoffs.

The toughest player that I faced last season was Mackenzie Wiggins of Sparta. She was unlike any other player that I had played against. She was very consistent and always swung with power. I could not help but be afraid. She has taught me to take every point as it comes and not to focus on the score or the past. I commonly look at the GL vs Sparta game and I am astounded by how much I have grown since then.

I really like to listen to “All of the Lights” by Kanye West. It makes me feel like I am in a college stadium surrounded by fans about to play the best game of my life. It makes me so happy and always hypes me up before a game.