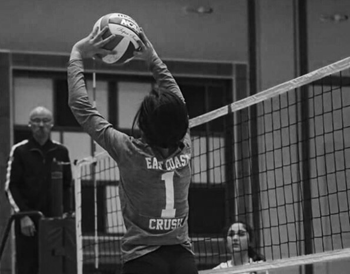 Barnegat had such a wonderful Cinderella story last year playing their best volleyball at the end of the season and powering into the state sectional semi-final. One of the bright spots was the new sophomore setter Patria Moreno.

Moreno had just two assists as a freshman but was a solid contributor in her initial year with the Bengals. But her sophomore year, she solidified herself as the quarterback of the teams offensive strategy posting 422 assists and helped orchestrate an eight game win streak that fell just short of a sectional final.

Patria is a versatile young talent for Barnegat. She lead the team in digs as well as assists. She also posted 45 kills and 29 aces in her second year. Barnegat returns 81% of their stats from last year losing just two seniors to graduation. They are projected in the top 45 which is significantly better than last years finishing rank.

With the dynamic duo of Patria and Veronica Tikhomirova setting the tone, the sky is the limit for this Spring’s Bengal’s squad. As Patria notes, there is plenty of young talent on the team as well as five seniors.

Moreno has made her club home at East Coast Crush. She is playing on the clubs best team at the highest age group. She has solid talent on the floor and leadership quality to drive success as an upper classman. It should be an amazingly fun two seasons for her as she concludes her high school career and is looking forward to making an impact at the collegiate level in the future.

Here is our interview with Ms. Moreno…

Tell us a bit about yourself, Patria? (What school do you attend, what town do you live? What year are you graduating? Tell us about your family? etc.)

I was first introduced to volleyball when I was 8, not at a serious level of course. My first time playing on a team was in 6th grade. What inspired me at first was my dad because of his success playing volleyball. What later inspired me to make it my main sport was a very close family friend who played volleyball for St. John Vianney at the time, Gaby Merced.

I believe our high school team will be successful this upcoming season because we finally have what we lacked last season which was a good amount of senior players with experience. We had an extremely young team last year that was led by 2 seniors, and one of them was injured for the first half of the season. Everyone except 2 senior players returned but we have some freshman with a lot of talent stepping up into those positions. Our key to success will be coming in with the same mentality we had last year during states where we played our hardest no matter what.

My teammates are a very talented group of girls and we have a great bond on and off the court. This year’s standouts will definitely be our new sophomore middle Gianna Gerckens who has improved so much from last year and is a great asset to our team because she is replacing our senior middle, Gilana Fitzmaurice.

You had a truly versatile and breakout season as a sophomore, switching to setter and racking up 422 assists as well as 189 digs, 45 kills, and 29 aces. What are your goals for the remainder of your high school career?

For the remainder of my high school career I would like to break 1000 assists, but with a shortened season it might be a little more difficult. I also want to leave a positive impact on my team and teammates. This year specifically, I would like to continue to bring the team closer specially during a time like this where things aren’t normal.

In your game last year vs. Lakewood, you tallied a remarkable 40 assists in the match. What do you love about being a setter?

As a setter I love that I’m very involved in a majority of the plays. It’s very important to play smart because you determine where the ball is going.

I plan on playing volleyball at a college level, it’s something I’ve always wanted to do. I haven’t really looked at too many schools yet but I do want to play at a competitive level.

Tell us about your experience with the East Coast Crush?

I would like to thank most of my success to East Coast. My freshman year I was an outside hitter on varsity for Barnegat. That year I went to East Coast and became a setter for their 16s team. Since that season, I’ve stayed as a setter for my school team. Last year as a sophomore I played on their 17s team which was filled with a lot of talented players who are now seniors. This season I decided to stay on 17s so I could play with the girls in my grade who are also amazing volleyball players. I love the coaches there. They all live, breathe, and eat volleyball. One of my favorite coaches is Coach Jameel. Super awesome volleyball player, crazy vertical, you name it he could definitely do it. Another one would be Coach Amy Bruno. She is an amazing person and is a great role model.

Tell us about your high school coach and Club Coach?

My high school coach is Karla Jennings and she is a very humble person. She knows the game very well and is very competitive. My club coach is coach Phil Kening who has been almost like a father figure to me. He’s always been there for me and pushes me to be the best I can.

I have a very solid support group. From my friends and family all the way to my coaches. I’m extremely grateful for everything they have all done for me and I give them all the credit for my success in school and on the court.

How are you and your family dealing with the current world situation with COVID-19?

Thankfully, my family and I are doing well during this pandemic. I really hope we do end up having a normal fall season this upcoming season. I’m not sure how things are looking right now, but I hope things get better soon. This pandemic has already affected all the volleyball girls in one way or another.

During the off-season I typically do other sports just to stay in shape. My freshman and sophomore year I did winter track and this year I did basketball and field hockey. When I’m not doing other sports I just work on my form and technique.